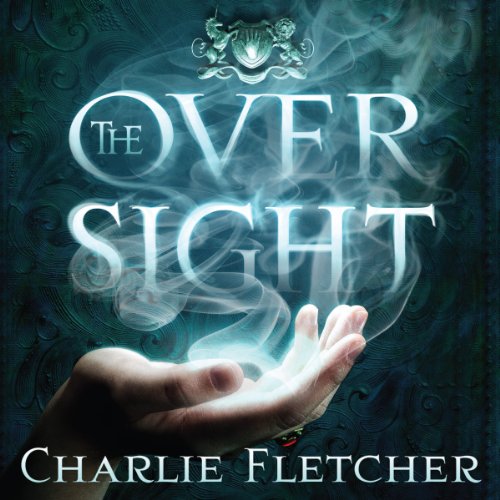 Only five still guard the borders between the worlds. Only five hold back what waits on the other side. Once the Oversight, the secret society that polices the lines between the mundane and the magic, counted hundreds of brave souls among its members. Now their number can be tallied on a single hand. When a drunkard brings a screaming girl to the Oversight's London headquarters, it seems their hopes for a new recruit will be fulfilled - but the girl is a trap, her appearance a puzzle the five remaining guardians must solve or lose each other, and their society, for good.

As the borders between the natural and the supernatural begin to break down, brutal murders erupt across the city, the Oversight are torn viciously apart, and their enemies close in for the final blow. This dark Dickensian fantasy spins a tale of witch-hunters, magicians, mirror-walkers, and the unlikeliest of heroes drawn from the depths of British folklore. Meet the Oversight, and remember: when they fall, so do we all.

"Exciting, exhilarating, scary and moving in equal measure, The Oversight is a teeming world of dark deeds and dark magics, brilliantly realised. This feels like the start of something amazing" (Mike Carey)
"Fletcher's Victorian London is juicily vivid, and laced with macabre wit. There's a real sense of grim danger, both natural and unnatural, hungrily awaiting the slightest mis-step" (Frances Hardinge)
"A richly atmospheric and intensely readable slice of Victoriana, with a splendidly eerie sense of the way the unearthly lies cheek-by-jowl with the mundane" (Adam Roberts)
"Utterly enthralling: Charles Dickens meets Susanna Clarke" (Lou Morgan)
"Told in a kind of compelling and hypnotic poesie that I just lapped up... I'll certainly be reading the next one” (Cory Doctorow)
“A remarkable combination of British folklore, brisk pacing and wide-ranging imagination” ( Kirkus Reviews)
“Richly atmospheric (the evil lurks in the background of every paragraph), the book should be a big hit with supernatural-fantasy readers ... the second book can't come soon enough” ( Booklist starred review)
“The Oversight is - and let's be clear here - something very special... It's oh so moreish a morsel. I'd read a prequel this evening, a sequel as soon as” (Niall Alexander, Tor.com)

What listeners say about The Oversight

A great complex fantasy embedded in the dickens world, a delightful surprise by an unknown author.

Very enjoyable listen in a great setting. foggy London nights, horses & carriages, steam boats & Magic. Magical creatures & places and a very unknowing general public all being policed by "the oversight" - the MIB's of the Magical realm. Others have said it, comparable to Jonathan Strange and Mr Norrell but different enough to not be too similar. Excellent Narration. Only reason for slightly less than full house of 5 stars was I found the plot use of coincidence to move things forward occasionally stood out, they are always there in most stories of course but I think there were just a few too many coincidences so they were noticable - but its a minor niggle, it is a great story and I am looking forward to the rest coming soon I hope.

If you're looking for a beautifully written supernatural Victorian thriller this is pretty much ideal. It's clearly at least partly inspired by Jonathan Strange and Mr. Norrell (amplified by being read by the same superlative reader), but this is more of a genre novel, with suspense and thrills and good guys/bad guys. The supernatural London police force and some horror elements also shares some of the spirit of the Rivers of London series. The entertainingly Dickensian cast of characters is huge and diverse- almost too huge, there must be at least six point-of-view characters-- the piratical Cook, the mysterious amnesiac girl, the other mysterious mad woman, etc etc. The prose is convincingly Victorian and a bit florid if you like that sort of thing, which I do!

It ties up its most burning plot points but is clearly setting up a series, so one more thing to wait impatiently for..

This is Jonathan Strange-ish, in other words wonderful. And Simon Prebble is a truly fantastic reader - try The Baroque Cycle by Neil Stephenson if you want more of that dry irony and great array of characters. And, of course, Jonathan Strange.

I would love confirmation that Prebble will be doing the next in the series, The Paradox. It's a great pairing of excellent reader to strong story telling.

This is a delightful gothic fantasy that starts in the gas-lit, fog-drenched streets of Victorian-era London, and follows an ages old coterie, now deeply diminished, known officially as the “Free Company for the Regulation and Oversight of Recondite Exigency and Supranatural Lore.”  The group of personalities making up the Oversight are a strange bunch at first glance, growing more and more endearing as we follow them in their efforts to guard the borders between magic and the mundane. Strange creatures from folklore lend a tasty sense of eeriness to the story as well as some very creepily disturbing human antagonists. I enjoyed myself immensely listening to this book, some conflicts were concluded while others are left for future storylines and the path is paved for much more to come. The future looks quite desperate for The Oversight, but there’s also hope for this steadfast group of friends. Remember: “When they fall, so do we all.” I can’t wait to see what happens next!

Love the idea but somehow didn't quite work for me

I was really looking forward to this one as it sounded as it if would tick all my boxes: London, magic, evil fairies, grimy 19th century setting - all my favourite things - but it never quite gelled. I think the main problem are the characters in that no one really has time to develop one. This is especially true of Lucy and as I could never become invested in her as a person. Part of the problem may be that she doesn't really know anything about herself so her actions seem to come out of nowhere and she can't explain why she does them. This is especially true of the rushed ending - clearly just to get things up for the sequel.

There are some good things. The magical element has been really well thought through with some very visual details like the bone pet or the bloodthirsty puffin skull. The villains are much more fun than the heroes; the Templebane family's witch hunting backstory is great and the Sluagh fighting a rearguard action against urbanisation - all that iron and running water - are excellently creepy and amoral.

On the whole, I enjoyed The Oversight. I thought it might be quirkier than it actually is, but it's a work of serious urban fantasy with some interesting twists. My main criticism is that the book is overlong. Some of the really great action was stalled by over-descriptive passages that went on and on. I persevered and I'm glad I did, but I was a bit wrung out by the story by the end and found I had no appetite for Book 2 in the series.

This book is a real mix of good, okay and utterly dull. In fact the first chapter was so boring I almost stopped listening. This continues throughout the book, you just think it's beginning to pick up then it becomes almost unbearable tedious again. I also hate the scattering of Americanism littering this book - it's a real pet peeve of mine. The narrator has a pleasant voice and does a good job of reading the story. In fact, I would say he was the books saving grace. Can't say I particularly enjoyed this, or that I would recommend it. I certainly won't be tempted to try anything by anything from this author again.

Can I have some more sir?

Many, many things. Mostly that I really didn't know what I was letting myself in for and was delighted with the writing, the narration and the characters. I particularly enjoyed the unfolding of the Oversight and it's situation and the lack of blatant, boring or clumsy passages of explanation. The alternative London that is created is excellent and the sense of depth of story / background really worked for me.

A gripping novel from start to finish, with exciting characters who you will to win! Looking forward to the Paradox.

Packed with great characters, both courageous and hideous alike. Fantastic plot lines with a fluid direction. There wasn't a point where I was board with the story, and the narrator made this all the more interesting.