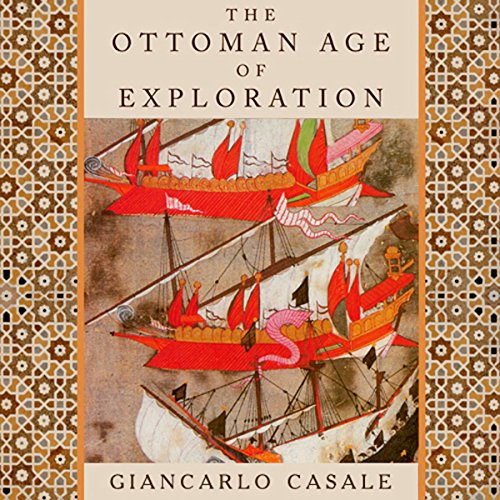 The Ottoman Age of Exploration

In 1517, the Ottoman Sultan Selim "the Grim" conquered Egypt and brought his empire for the first time in history into direct contact with the trading world of the Indian Ocean. During the decades that followed, the Ottomans became progressively more engaged in the affairs of this vast and previously unfamiliar region, eventually to the point of launching a systematic ideological, military and commercial challenge to the Portuguese Empire, their main rival for control of the lucrative trade routes of maritime Asia.

The Ottoman Age of Exploration is the first comprehensive historical account of this century-long struggle for global dominance, a struggle that raged from the shores of the Mediterranean to the Straits of Malacca, and from the interior of Africa to the steppes of Central Asia.

Based on extensive research in the archives of Turkey and Portugal, as well as materials written on three continents and in a half dozen languages, it presents an unprecedented picture of the global reach of the Ottoman state during the 16th century. It does so through a dramatic recounting of the lives of sultans and viziers, spies, corsairs, soldiers-of-fortune, and women from the imperial harem. Challenging traditional narratives of Western dominance, it argues that the Ottomans were not only active participants in the Age of Exploration, but ultimately bested the Portuguese in the game of global politics by using sea power, dynastic prestige, and commercial savoir faire to create their own imperial dominion throughout the Indian Ocean.

What listeners say about The Ottoman Age of Exploration

Book is great. I know Casale personally, he is not only a great historian, he is also one of the greatest storytellers one could encounter. This book really gives a better view about how Ottoman rulers saw the world and how dynamic the Ottoman State was against changes happening around them. They were aware the world was going into a great transformation, they did their best to respond to it.

My problem was with narrator's butchering of turkish words. Especially names were so horribly pronounced that at some point I thought this was done on purpose. If they had walked on the street and found one turkish person, they would not have this problem. This is a book on Ottoman history, and not one name is pronounced correctly. I am not asking for geniune turkish accent, all I am asking for is some effort for correct way of reading words. I did not realize who narrator was talking about even when he referred to names I knew by heart as an Ottoman history enthusiast.

Just one example: Narrator refers to someone called "Sefer Reis". Both e's are vocal and close to e's in the word "tell" or "end"; and you are supposed to say "r" at the end. But narrator reads first "e" as i in "is", and second "e" as a in "about", but longer. And he swallows the "r" at the end. For hours I did not realize he was saying "sefer", which is a common turkish word and means campaing or journey. I thought Sefer Reis' name was not turkish at all, and he decided to join turkish navy with his original foreign name when he was relatively old.

There are so many other examples like this, he does not bother to pronounce even much more common names somewhat decent, like "Suleiman". It transforms into a "Sulumen". It was really annoying.

Ottomans in the Indian Ocean

In many ways this book reads like a textbook but it is highly readable. The news from the Middle East recently triggered me to learn more about the history of the area. Giancarlo Casale, a professor of history, proceeds chronologically, weaving together political and intellectual history of the Ottoman Empire throughout the 16th Century. He focuses on a number of high officials among them were the Grand Viziers Ibrahim Pasha, Hadim Suleiman Pasha, Rustem Pasha, the one Grand Vizier opposed to the whole Indian Ocean enterprise, and Sokolla Mehmed Pasha, probably the strongest supporter. They were aware of what advantage a strong Ottoman presence in the Indian Ocean could be to the profitable Spice trade. The Ottoman controlled the area from the Red Sea to Atjeh in Sumatra. In response to the Portuguese global claims the Ottoman declared that the Sultan was the “Caliph of all Muslims”. The Caliphate united all Muslims under the same religious authority, much as the Papacy did for Christendom. The author shows that shifting priorities and bitter personal rivalries at the Ottoman court hampered the development of a long term global policy. Slowly the conviction grew that tax income from land was preferable to the profits made from the government controlled spice trade.

Casale’s aim is to show the achievements of the “Ottoman age of exploration” not only the military and commercial but the intellectual and political ones. He does so in a convincing manner, making both sides, the Ottoman and the Portuguese, come alive in their negotiations, their self views and perception of their opponent. The book is well researched. Casale speaks Turkish, Portuguese and Italian, enabling him to consult all the relevant archives and secondary literature. James Adams narrated the book. I would have given this book a 3 1/2 , there is no halves so I rounded it up.

Historian with a specialized interest in 16th century Indian Ocean conflicts. Or someone who was planning to tour the old port cities: Diu, Gujarat, Hormuz, etc. The book is not so much about exploration, as it is about military struggles between Portugal and the Ottomans over control of port cities on the Indian Ocean trade routes. Better to get a book or ebook version, so you can easily skip ahead through the long narratives of military campaigns–unless of course that's your thing. Rather light on social and cultural history, heavy on military, diplomatic. This may reflect the available sources.

Would you be willing to try another book from Giancarlo Casale? Why or why not?

Not in audio format.

By rolling every foreign word around in his mouth as if it were an olive from which he was trying to extract the pit.

This book gives a fascinating account of the Ottoman political maneuvers in the 16th century Indian Ocean. It gave me a new perspective on events as diverse as the rise of Emperor Akbar in India and the sinking of the Spanish Armada. It's piqued my interest in Yemen and Gujarat in particular.

If you are not familiar with the geography of the Indian Ocean, you will probably end up like me, poring over maps for hours after listening. My own ignorance of the region and of Ottoman history made this book more challenging to listen to than most of the audiobooks I have finished. I had to rewind and relisten to many parts in order to make sure I understood just what the sequence of events was.

Overall I enjoyed it very much. I have given it 3 stars for story just because it is not a breezy listen the way some books are.

it was filled with facts and details I never knew, though I already had medium knowledge of the regional historical events. really recommended as a valuable companion to Braudel's research

The author would have had to have written a different book.

What was most disappointing about Giancarlo Casale’s story?

Context was ignored. Plenty of important things were happening to the Ottoman Empire outside of the Indian Ocean, and these are not even mentioned.

Casale is so anxious to support his central thesis that he makes almost ridiculous claims. Most of the "exploration" he describes consists of the Ottomans "exploring" the Arabian Peninsula. He spins Ottoman military defeats as successes, ignoring the fact that Portugal was a tiny European state and its fleet was operating many thousands of miles from home, while the Ottomans were an enormous empire whose fleet was operating close to home base.

No details are given about the technologies of the day or the details of military engagements. We are only told who won and lost each battle.

All in all, a boring, sloppy, non-credible story.

This is one of those things that you can only understand by listening to the narrator yourself.

Instead of this book, read Roger Crowley's "Empires of the Sea". That is an amazing book.

Ottomans didn't do much

The book starts by saying that the Ottomans didn't do any exploration and the the book confirms this. I kept going in the hopes that there might be some interesting history, but alas no. What the Ottomans did do was expand inland in several places along their Indian Ocean trade route and that's about it.

The book seems well researched and is written in the style of most other history books (ie dry), so if your after an account of the mid to late history of the Indian Ocean trade route (doesn't discuss its early stages) then fill your boots.

It does seem a bit disingenuous to title the book "Age of Exploration" and then say in the preface that actually do anything that would be considered exploration (this confirmed in the rest of the book). Book should be called "Ottoman Age of Indian Ocean Trade Route Management'.