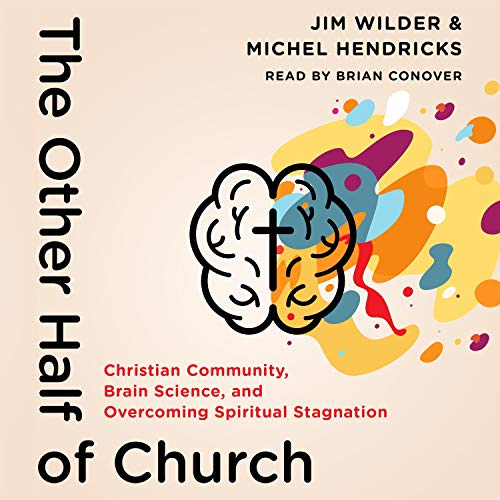 The Other Half of Church

Could brain science be the key to spiritual formation?

Why does true Christian transformation seem fleeting? And why does church often feel lonely, Christian community shallow, and leaders untrustworthy? For many Christians, the delight of encountering Christ eventually dwindles - and disappointment sets in. Is lasting joy possible?

These are some of the questions Michel Hendricks has considered both in his experience as a spiritual formation pastor and in his lifetime as a Christian. He began to find answers when he met Jim Wilder - a neurotheologian.

Using brain science, Wilder identified that there are two halves of the church: the rational half and the relational half. And when Christians only embrace the rational half, churches become unhealthy places where transformation doesn’t last and narcissistic leaders flourish.

In The Other Half of Church, join Michel and Jim's journey as they couple brain science with the Bible to identify how to overcome spiritual stagnation by living a full-brained faith. You'll also learn the four ingredients necessary to develop and maintain a vibrant, transformational community where spiritual formation occurs, relationships flourish, and the toxic spread of narcissism is eradicated.

What listeners say about The Other Half of Church

A must read for any Christian. A game changer for anyone dealing with mental illness who has been told they don't have any hope for change. This book and the accompanying book, The Pandora Problem, will provide a real and straight forward approach to overcoming the thoughts and actions that hold us back from experiencing God in our lives.

Incredibly nerdy, but worthwhile. Tackles joy, shame, trauma, mental health and other seemingly taboo things in the church that are needed and relevant. All should read/listen.

Fascinating look at how God designed our brains to change for the good through joyful, faithful, loving community! The gathered Church is not a relic, it’s a life-giving, maturity-making, joy-filling necessity for all who wish to become more like Jesus!

I found myself listening and wondering if I agreed with some of the conclusions. I did find value in it though. That said, it would have been nice to have seen some more examples of practical applications. Unfortunately it was light on that front. Maybe that’s for another book.

This book has really helped to highlight and explain the issue of narcissism in church as well as provide equipping and empowerment to manage it and overcome.