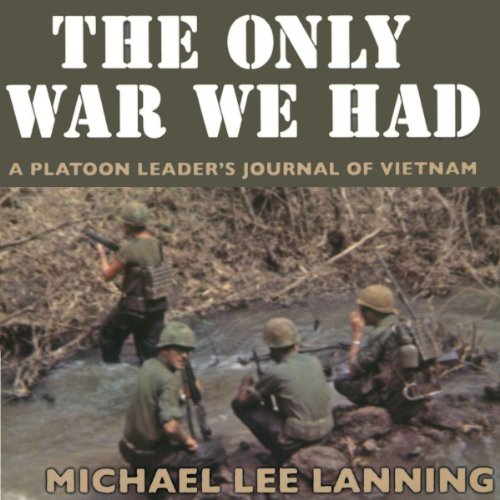 The Only War We Had

In my year in Vietnam, I walked the booby-trapped rice paddies of the Delta, searching for the elusive Viet Cong, and later macheted my way through the triple-canopy jungle, fighting the North Vietnamese Regulars…I sweated, thirsted, hunted, killed. Somewhere in all my experiences, I overlapped the situations of nearly every infantryman and many others who served.

Michael Lee Lanning's journal of his first tour of duty in Vietnam provides an unvarnished daily account of life in the field. The blood, fear, camaraderie, and tedium of combat and maneuver. Fleshed out with narrative and detail years later, the pages of this memorable book, first published in 1987, show an eager young recruit growing before the reader's eyes into a proud but bloodied combat veteran.

Subsequent volumes in his Vietnam Trilogy will detail Lanning's tour as a company commander and his post-war investigation into the mind of the enemy. Through his eyes, readers see the reality of a war that did not always receive glory but was, in his words, "the only war we had."

What listeners say about The Only War We Had

What made the experience of listening to The Only War We Had the most enjoyable?

It's simply amazing to hear Lanning's books. They strike me as being completely honest, since he never pulls his punches, even when it would have been easy to leave some things out in order to make himself look better. One wonders why he didn't make full Colonel--no doubt it has something to do with his habit of answering even superior officers in his very direct manner. Seems that, unfortunately, the REMF's had the last laugh. It certainly isn't a judgment on his combat record, which is simply brilliant! I like this guy much better than, say, Larry Heinemann. Lanning doesn't indulge in cynicism and sarcasm at the expense of the men with which he served. His work makes me respect the Vietnam vets all the more.

Great read. Perfect narrator for story. I learned alot about Vietnam and our soldiers sacrifice.

Amazing account. He is right to be proud of his service and we should look back with some shame on how we treated these soldiers when they returned.

The diary format of the book. Gave a strong sense of order and time.I liked the narration least, although I felt the book would have been improved by more quoted dialogue and talk of the actions of others - granted it is in effect an extended diary.

Not really relevant as few others are mentioned by name.

Yes. I think it would make a good film and I don't recall a film of this nature. Something like Full Metal Jacket or Born on the Fourth of July, but they both had (reasonable) agendas and following one man day by day would make a fascinating film.

I found the narrator pleasant to listen to, but his odd cadence and frequent use of a low voice was both distracting and made it difficult to concentrate on. It sounded as though he was bending his head down to read an uncomfortably placed script. It really is most odd.

A must for Vietnam enthusiasts and future leaders

A fantastic book about a young infantry officers tour of duty in Vietnam (this is book 1 of 2).

Fantastic description of one mans war

Having listened to several books by soldiers and airmen who had served in Vietnam, this is by far one of the best. You can actually feel your there beside the writer each step he takes. Looking forward to listening to his last six months in the jungles of Southeast Asia.
God bless all those who didn't return.

It was enjoyable and interesting, narration was good.

I enjoyed this but wouldn't listen to it again.