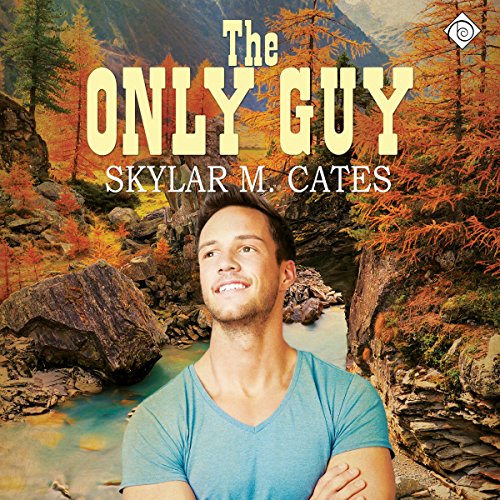 All his life, Jesse’s known Aaron is the only guy for him, yet he’s never told his childhood crush how he feels.

Jesse is shocked when his secret crush arrives at his doorstep. Spending time alone with Aaron in the remote mountain cabin, Jesse is overwhelmed.

Aaron is surprised to find his former best friend’s little brother all grown up. Despite Jesse’s wild looks and unkempt beard, Aaron feels a pull of attraction. Forced out of the army due to a medical condition, Aaron fears more complication and does not want to risk their friendship.

Long ago, Jesse settled for being Aaron’s faithful pen pal, but now, Jesse wants more. He’s determined to have a second chance.

As Jesse and Aaron find comfort in each other and in the isolation of the cabin, they begin to explore their romantic feelings. But what will happen when they have to face the real world together?

I like this one better than the first, though I did enjoyed that one too. It had a nice build up with the past relationship. And no meet-cute (I say this as a good thing) though I guess it would be a remeet cute. Good low level angst.

The Jesse's parents party where Aaron finally starts seeing things clearly. I also like that the characters from the other books are carrying on their lives in a "realistic" fashion. Things are changing for them even when they "off-screen" and their actions aren't necessarily effecting the main characters of the current book.

I liked both Jesse and Aaron (though at times I wanted to slap Aaron upside the head). They were sweet together. It's a nice romance with some family drama and angst. I did like that no everything was wrapped up in a perfect bow. BUT I do wish there had been a bit more resolution with Aaron's family at least. Aaron's mom put the s on mother. But she was sweet with him but then was SUCH a witch to Jesse, who'd already had enough parent issues. I would have like to see her eventually welcoming and apologizing to Jesse and seeing what jerks her "friends" were. But it's very nice read.

Sweet story, a little better than the average

I like the fact that you accually feel like the MC are real peope with real problems. I especially liked the fact that the entire background story isnt told right upfront and as the story unfolds, you begin to get a better feel for the MC.
Other than that it is also an ever-after lovestory.
Worth a listen but not in my top ten
Narrator fine.

The publishers summary is misleading, making the book sound far more exciting than it is. This is not a book about risking anything. Jesse makes steps with his issues, but Aaron doesn't do anything.
Overall, it's like eating marshmallows, sweet but no substance...

It starts very well but the hospital scene and its aftermath is really daft. And repetitive. I just couldn’t take more of Aaron. Pity because Jesse is a great character and Matt Baca is a good narrator.

Finding the Right One

I listened to the Audible version of this story. I was a bit disappointed that this story really takes place somewhere else but we get to check in with the characters from the first book during the story. I loved the way that Aaron on his own came the to conclusion that what he thought he wanted wasn't really the best choice for himself. I love tha Jessie is willing to be noble and when prompted to do the right thing. I wanted to deck the rest of Jesse's family and I love how Aaron was there for him. Wonderful story of finding the one you are meant to be with

Aaron fell in love with Jesse’s brother when they were kids. When he didn’t return the sentiment Aaron fled, but has harbored the crush for all these years.

Meanwhile Jesse has had a crush on Aaron ever since he knew what it was to want another person.

While Aaron was in the military he and Jesse formed a strong friendship through the mail but still, Aaron harbors nothing more than a vague feeling of companionship for Jesse and a burning hot adoration for his brother.

One day, after Aaron is sent home from the military for a bad heart, he goes to visit Jesse and is surprised at the man Jesse has become.

Jesse, a loner from the beginning, has only become more of a recluse over time, doesn’t know what to do with his childhood crush. On the one hand he thinks he’s just as gorgeous as ever, but doesn’t know how to like someone who can “like” his huge jerk of a brother.

Finally – FINALLY – Aaron manages to see Jesse for the amazing man he is and to see the other crush he’s harbored all these years was nothing more than a mirage.

It looks like the couple is really going to make it work when Aaron’s medical troubles drive him to the hospital again. Aaron doesn’t want Jesse to be burdened with anyone less than perfect so he pushes Jesse away. Fortunately Jesse fights for Aaron, and after a brief, but tense period apart, Aaron pulls his head out and the two re-unite… forever.

In this book, Aaron (Dean’s friend) is nothing like you’d expect an ex-military man to be. In fact, Jesse is the tough one of the relationship.

I really enjoyed watching Jesse deal with his social anxiety and the support he got from Aaron. I also really liked that Jesse was NEVER a wimp. He put up a good fight and Aaron really had to work hard to convince him what they have is real.

The secondary characters, ie brother, parents, friends; were all very well thought out and really added to the realistic feel of the story. The sub-plot with Jesse’s family was fascinating. I could really feel his pain at being “the red-headed-step-child” of the family.

I enjoyed this book when I read it and Matt Baca did an excellent job with the audio. He did a nice vaguely Brooklyn accent when needed and it was clear who was speaking.

I give both the book and the audiobook 4.5 stars, I really enjoyed them!

Not as good as the first one

Sadly I didn't like this as much as the first one. It started out good, but the last 20% was not so good. It kinda ruined my impression of the book.

Narrator Matt Baca does a good job with this one too. I did hear one mistake, though. When Jesse looks at the old letters from Aaron early in the book, Baca says "Anthony's letters" instead of "Aaron's letter". Anthony is the main character from #1.

What can't real life be this good? Thank goodness for romance novels to escape into!

...was perfection in this story. It was great to meet Aaron and Jesse and for once a family did not have a complete happy ending and I appreciated that.

Aaron and Jesse together was amazing and I hope eventually there will be a wedding for those two.