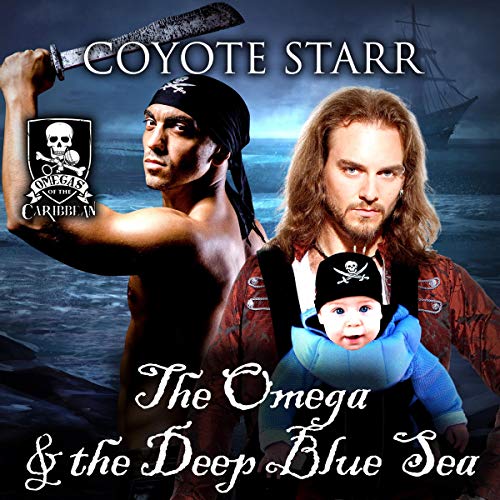 The Omega and the Deep Blue Sea

By: Coyote Starr, Omegas of the Caribbean
Narrated by: Joseph Bader

Captain Blackwood never wanted a baby - but his hot omega stowaway is about to have one...so he’s trapped between the omega and the deep blue sea!

Lord Edward Smythe, the youngest son of the Earl of Northridge, is fleeing an arranged marriage to a young woman. Like most of the London aristocracy, his family finds their history of fertile omegas embarrassing. But Ned knows that the last thing he wants is marriage to a woman. So he stows away on The Felicity, a ship bound for the West Indies, where he plans to make his fortune.

For years, William Blackwood has captained the Neptune’s Jewel, plundering merchant ships foolish enough to cross paths with him and his crew of pirates. He’s crossed and re-crossed the Omega Triangle, watching as the omegas in his crew go into heat and fall pregnant to the alphas. But he’s always kept his distance. A pirate’s life is dangerous and difficult, and the last thing he needs is the responsibility of a mate and child. And even if he did want it, the curse on his family makes it impossible. Until his crew overtakes The Felicity and he takes Ned on board.

To William’s surprise, he realizes the poor boy doesn’t even know he’s an omega, much less what effect the Omega Triangle will have on him. Suddenly William discovers that he can’t resist the siren-call of Ned’s desire, even though he knows giving in to it will change his life forever.

When Ned realizes he’s pregnant, they must decide if their fledgling love can survive Ned’s pregnancy - and if they can stay together, at sea or on land.

The Omega and the Deep Blue Sea is a sweet M/M MPREG pirate romance with some spicy heat, knotty love, hot adventure, a surprise baby, and a guaranteed HEA. It is part of the Omegas of the Caribbean collection and can be listened to as standalone.

What listeners say about The Omega and the Deep Blue Sea

This was a cute story. The storyline was gratifying. But, what was not, was the narration. The narrator didnt change voices of each character's. All sounded the same. which made me continuing asking myself while listening (who is this talking now?🤔). Even though at each new chapter the character was announced, in the middle of it you forget because each voice was the same.😕If you can get passed that, then, you might enjoy this quick listen.😏