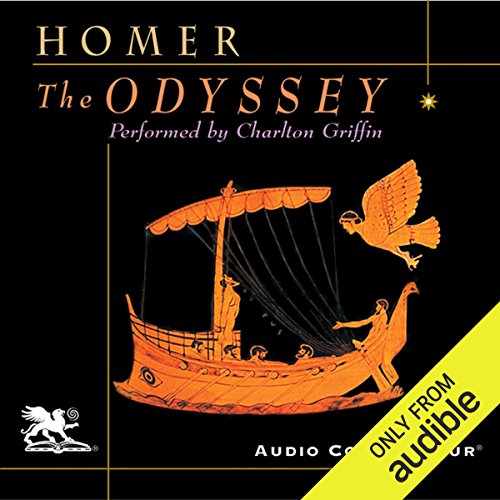 The Odyssey is the greatest adventure story ever written, and one of the great epic masterpieces of Western literature For almost 3,000 years, it has been a storehouse of ancient Greek folklore and myth. It is also our very first novel, if we think of it in terms of romantic plot development, realistic characterizations, frequent change of scene, and heroic dramatic devices. These elements continue to make it far more popular than its kindred piece, The Iliad. No other character in world literature has inspired as many literary works as Odysseus ("Ulysses" in Latin).

The story concerns an incident in the Trojan War and the difficulties of its hero, Odysseus, as he attempts to reach his home. Although possessing courage, stamina and power, it is his powerful mind that ultimately enables him to reach his destination and slay his adversaries. Odysseus is the very model of the worldly, well-traveled, persevering man. With his diplomacy, quick wit, and shrewd resourcefulness, he survives one catastrophe and set-back after another.

What listeners say about The Odyssey

Charlton Griffin's reading of this fantastic story is nearly unbelievable! He makes a wonderful story even better. His voice is very pleasing to the ear, and his theatrical performance is the best I've listened to. I will certainly purchase most other books by him. The deep thundering voices he gives to the Cyclops and other monsters in this tale will make you listen to it more than once. The Muses music at chapter transitions really add a nice touch as well. Thank you Mr Griffin! - Carl (Michigan, USA)

Audible didn't mention who the translator was but when I input the first line into Google I found it linked to Augustus Taber Murray on Wikipedia.

I have been trying to find for years a version of the Odyssey that I liked as much as I do most translations of the Iliad. In this reading of an obscure translation, which I listened to while I was working, I finally found what I wanted. I love action and fantasy and I had always thought that was the best reason to read this work. This time, I was more impressed by the character of the heroes and their women: their code of honor, their hospitality and generosity, their adaptability to the decrees of fate or the operation of chance, their competitiveness, their cruelty to men, women, and children, their loyalties and betrayals. I've read that the Odyssey was the first great adventure story but I think one could say that it was the first psychological novel.

Charlton Griffin was terrific when he read the narration and the men's voices. I always imagined that Homer's warriors spoke like this. He wasn't at all convincing when doing the women's voices. I wish Audio Connoisseur had used a woman narrator.

If you could sum up The Odyssey in three words, what would they be?

What was one of the most memorable moments of The Odyssey?

Most of the famous scenes often depicted in dramatic retellings take up but a small part of the text That may disappoint many, but take heart, The most memorable parts involve the characterization, timeless themes, and how relatable the characters remain across nearly three millennia. Their world and customs are ages removed, and yet the humanity which we all share make it a riveting tale even today.

Have you listened to any of Charlton Griffin’s other performances before? How does this one compare?

I started with The Iliad. Griffin's a one-man narration machine, having both the timbre, gravitas, and British accent an American like me has come to expect as the quintessential sound of Classical literature.

It will take multiple sittings. I recommend spreading them out so you can reflect on the richness and themes of the prose. As Edmund Burke said, reading without reflecting is like eating without digesting.

I won't feign pretension and say that my attention span wasn't strained at times or that my mind didn't wander (hence my recommendation that you space out your listenings). However, eating healthy food takes discipline; so, too, does consuming cultural victuals. It might not taste good at the time, but your health will be better for it. Tastes should be cultivated, and the proof is in the reading.

I Feel Obliged to Write a Somewhat Bad Review

Well as much as I have enjoyed some of Mr. Griffin's other readings I must say that, as other listeners have stated, his handling of female voices is fairly bad. Harpy is quite a good word to describe it. I have listened to another book read by him since this one and he does a better job but still kind of sub par. Maybe this was one of his earlier reads and has since improved, definetely check out The Peloponesian Wars it's quite excellent I thought, if you are into that sort of thing. One thing about Griffin is I think he generally picks out really good translations of books which is very very important for these types of books. Maybe he needs a female counterpart for the voices because besides that I really enjoyed the narration. As far as the actual story goes I didn't really enjoy it that much but certainly interesting and worthwhile I would say, and I was hampered somewhat by the above mentioned inconveniences.

Much to my surprise, this version broke down each book first as a foretelling, then it exploded into a taleI could not get enough of.

I've been more and more eager as I get older to hear and learn about history, ancient cultures and read the classics. I have whole hardly loved it and absorbed the information well. appreciating well written and/or well performed such books.
this story is well known to most, but the first time I listened to it in it's more classical, poetic (if I'm even describeing it right), I was worried it might be hard to follow our get into. adaptions I usually choose. but this was so well organized and seemed a true rendition and SO WELL PERFORMED. I enjoyed and followed it easily. I loved it. it NEVER Once lost my interest.
highly recommend. quality listen

Would you be willing to try another one of Charlton Griffin’s performances?

I like the musical interludes and the sound effects and I love the book. The reason I am giving it a low mark is because of the narrator. The way he voices female characters is borderline offensive and profoundly irritating. I had to stop halfway because of this. They all sound cutesy and girlish, regardless of whether they are deities, old or young, which is I guess how this narrator imagines all women talk. I have a couple of other books narrated by Griffin and I think he is pretty good and easy to follow, otherwise. But this one is simply atroceous.Word of advice on all male narrators who are tempted to use a higher pitched voice to impersonate women - DON'T. It is offensive and very distracting.

classic tales of sea and myth

listened 2x, good readers, story of adventure of sailing the Mediterranean sea, endurance, love and war. Gods and goddesses of ancient times mix it up a bit. Goodness prospers.

Exciting, much easier read than Iliad. Narrator is fantastic. I have listened to both Homeric Epics while also listening to a Great Courses audio yielded deeper insight & understanding. I almost skipped this audiobook because of unjust criticism of the narrator but now glad I ignored those curmudgeons.

What a wonderful way to listen to the classic Odyssey - do try this out you shall not be disappointed - Enjoy! Kaizen

Of course, it's a wonderful story and it's well translated but the reader seems to be putting on some mangled RP accent with strange pronunciation - dogs are 'daugs'; costs are 'causts'; comely is comb-ly etc. Is he American? I have never heard anyone talk like that. And the women's voices are just plain annoying. I had never imagined Flame-eyed Athena speaking with a high-pitched squeak.

This is such a great book, so well written and fantastically presented, highly recommended

Pallas Athena, she seem to be the one in charge all through

Which character – as performed by Charlton Griffin – was your favourite?

It made me laugh a lot

It's a great book considering how long ago it was written