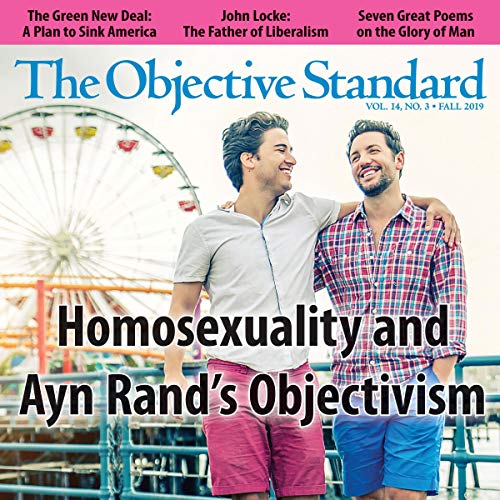 The Fall 2019 issue of The Objective Standard features the following articles, shorts, and reviews:

The Objective Standard is a quarterly journal of culture and politics written from an Objectivist perspective (Objectivism being Ayn Rand’s philosophy of reason, egoism, and laissez-faire capitalism). The journal is based on the idea that for every human concern - from personal matters to foreign policy, from the sciences to the arts, from education to legislation - there are demonstrably objective standards by reference to which we can assess what is true or false, good or bad, right or wrong. The purpose of the journal is to analyze and evaluate ideas, trends, events, and policies accordingly.

We maintain that the standards of both knowledge and value derive from the facts of reality; that truth is discovered only by means of reason (i.e. through observation and logic); that the factual requirements of man’s life on earth determine his moral values; that the selfish pursuit of one’s own life-serving goals is virtuous; and that individual rights are moral principles defining the fundamental requirements of a civilized society.

We stand opposed to the notion that the standards of knowledge and value are not factual but subjective (feeling-based) or other-worldly (faith-based); that truth is ultimately dictated by majority opinion or a "supernatural" being’s will; that democratic consensus or "God’s word" determines what is moral; that sacrifice for "the common good" or in obedience to "God’s commands" is virtuous; and that rights are social conventions or "divine decrees".

In stark contrast to these philosophic approaches, ours is a philosophy of reality, reason, egoism, and laissez-faire capitalism.