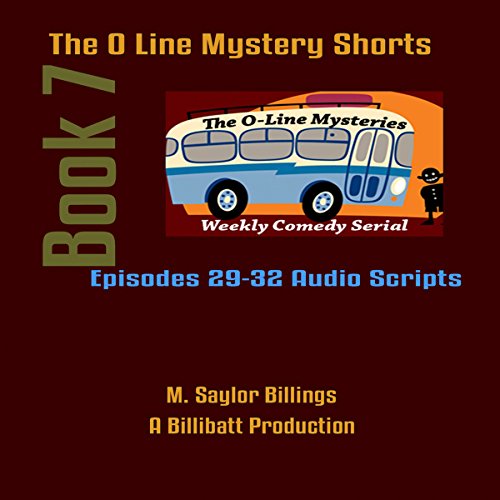 The O Line Mystery Shorts books 1 through 11 comprisethe complete dramatization of the short story mystery series. Originally released as podcasts, they have been remastered for audiobook listening.

Book 7 picks up on season 2 of the show and features episodes #29, "Lorna SeeksTherapy"; #30, "Mustang Sally"; #31, "Can O Worms"; and #32, "Alliance". In Season 2, the show progresses from stand alone episodes to a serial that builds on previous pieces of information from the characters and plots.

In episode 29, "Lorna Seeks Therapy", amidst the confusion followingthe season 1 finale, Sally begins the long journey that will unravel her past, Annie seeks to uncover a murderer and Lorna seeks a second opinion on exactly why everyone is so "weird"....

Then in episode 30, "Mustang Sally", Sally continues her secret meetings with The Nurse while distracting Lorna by casting suspicion on the Internet.... But when Sally forms an alliance with Michael, that's when the sparks fly.

And in episode 31, "Can O Worms", Sally digs herself deeper into problems and enlists Roberta to help her recover a device from Annie while Lorna shops for planters.

Finally, in episode 32, Lorna is left babysitting and out of the loop while Annie and Michael stake out Tim's killer and Sally has a clandestine meeting with the Nurse. But when Annie goes missing from the stake out,it's Lorna who decides "a good nights sleep" is in order.

Following in the footsteps of Classic Radio Dramas, The O Line Mystery Shorts brings to life new stories for the digital age.

What listeners say about The O Line Mystery Shorts, Book 7