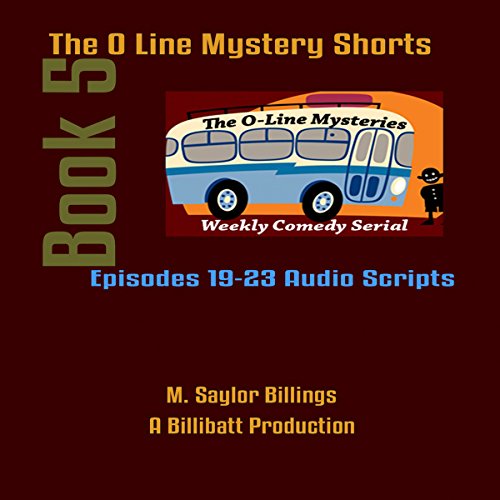 The O Line Mystery Shorts books 1 through 11 comprisethe complete dramatization of the short story mystery series. Originally released as podcasts, they have been remastered for audiobook listening. Episodes 17 and 18 are not included in the books because they were seasonal interview shows with the cast and crew. We resume the episodes in Book 5,featuring episodes: #19, "East Bay Whine"; #20, "Nobody Likes Interviews"; #21, "Three Blind Mice"; #22, "The Murdered Banker"; and #23,"Dental Damned".

Set on Ohlone Island in the San Francisco Bay, islandinhabitants Lorna and Annie have a penchant for discovering fraud, corruption, and murder.

In episode 19, "East Bay Whine", Annie gets her first solo marketing campaign with an East Bay winery, but she gets more than she bargained for when she begins to suspect someone in the company is trying to set her up as the patsy for their failing wine distribution.

Then in episode 20, "Nobody Likes Interviews", after Lorna publishes the self-help book she wrote while on painkillers for her back spasms she begins the long journey into marketing, with her first stop on a local talk-radio show with a host who tries to get her to cut him in on a marketing "deal".

In episode 21, "Three Blind Mice", Lorna's unofficial godmother, Tessa, is coming to town with a bag of tricks that is going to blow the lid off of how the Internet is accessed.... But the big question is can Tessa keep the lid on until her product is complete or will she fall prey to corporate espionage.

In episode 22, "The Murdered Banker", during a kayaking trip around the estuary Lorna finds an "old salt" long thought to be a drowned banker done in by his wife.... But how can Annie and Lorna prove hisexistence and free his incarcerated wife when the D.A. has the case on lock down?

And finally, in episode 23, "Dental Damned", when Sally finally has her long-needed dental work done, Lorna mistakenly drives away with a forbidden bulk of restricted painkillers. It takes all of Annie's moral strength to keep Lorna from using them as her retirement fund.

What listeners say about The O Line Mystery Shorts, Book 5