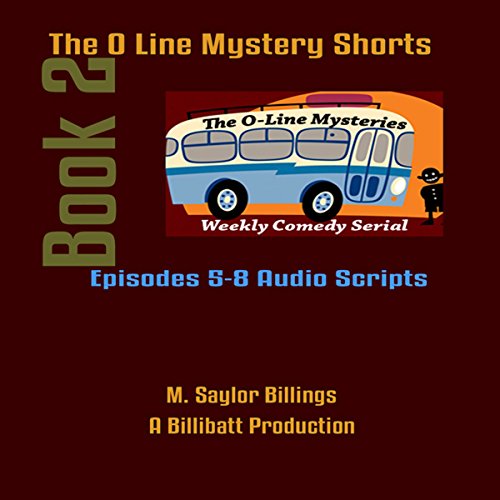 The O Line Mystery Shorts books 1 through 11 comprise the complete dramatization of the short story mystery series. Originally released as podcasts, they have been remastered for audiobook listening. Book two features episodes: #5, "The Wig That Knew Too Much"; #6, "Halloween Special Part 1: Shuck and Jive"; #7, "Halloween Special Part 2: Lorna's Father"; and #8 "Blackmail at the Gym".

Set on Ohlone Island in the San Francisco Bay, island inhabitants Lorna and Annie have a penchant for discovering fraud, corruption, and murder.

In episode 5, "The Wig That Knew Too Much", Lorna hears a hate-and-fear rhetoric show that is labeled as a news program on the island's cable access, so she decides to find out more about the show's star producer. When her own investigation comes up short, she enlists Annie's cyber-stalking skills but is silenced by a mysterious man with federal credentials who tells her the truth about the man behind the rhetoric.

In episode 6, "Halloween Shuck and Jive", Annie hasn't slept in two weeks because she believes Amy Winehouse is haunting her home. It falls to Lorna to prove to Annie there is more to ghosts than a little shuck and jive.

In episode 7, Lorna's Father, Quill, flies in to help Sally and Lorna with a few remodels on their new home. But when he goes digging under the house, he finds a mysterious lockbox filled with coded messages. After Lorna unlocks the coded messages, he takes Sally on a treasure hunt around the island looking for clues while Lorna heads to the local library to research the public records on the house and it's previous occupants who went missing in the 1920's.

And in the final short, "Blackmail at the Gym", Lorna returns to her gym for a swim and overhears some trainers talking about the rash of blackmailing activities possibly related to the gym. So of course, she jumps from the water and into the fray.

Following in the footsteps of Classic Radio Dramas, The O Line Mystery Shorts brings to life new stories for the digital age.