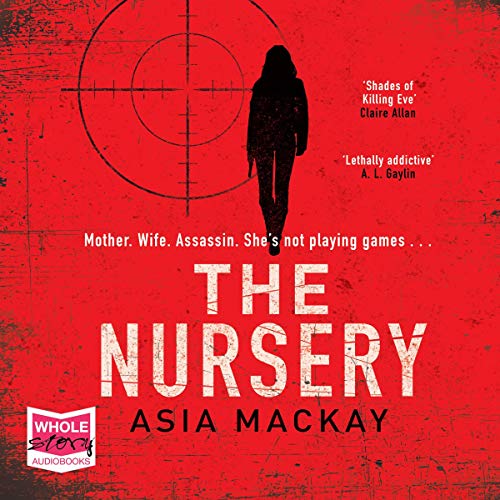 Lex Tyler is trying to have it all.

But being a working mother is so much more difficult when you're a secret agent for an underground branch of the security services.

Platform Eight have been tasked with tracking down and eliminating the traitor in MI6 who has been selling information to the highest bidder through a headhunting website for the criminal underworld that connects intelligence operatives with all manner of bad people with a simple right swipe. Deals get made. Secrets get sold. Missions fail, and agents die.

Lex's own home life is not much easier. With a husband who rings her in the middle of a gunfight to complain she's yet again forgotten to pick up his dry-cleaning, and a two-year-old daughter who has a newfound love of biting, surviving both the Terrible Twos and a traitor might just be too much for one exhausted mother to handle.

What listeners say about The Nursery

Another great book by the brilliant Asia Mackay. This girl can write!
Kept me wanting more all the way through.
Good story ... the plot never slowed .
Excellent narrator...Georgia Maguire is one of the very best!
I cannot wait for the third instalment ...keep up the good work Asia ..you have a gift!!!

Hilarious read - very cleverly written. I’d recommend to anyone juggling work with children. I hope she writes more of these

I have really enjoyed both the books in this series and will be waiting for the next one! Beautifully read, too!

Not for the men

Definitely one for the girls; amusing and interesting story of a secret agent mum. My only complaint is the very annoying child (Gigi) who ruins an otherwise great book.