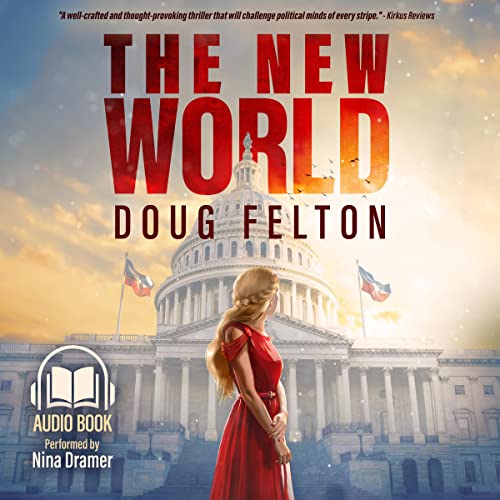 Jamie watched in stunned disbelief as the United States Senate abolished the federal government with a single vote. As the 17-year-old daughter of a US Senator, Jamie was sure that would be the most shocking news of the day. And it was...until she was chosen to be the first queen of the New World.

Under the visionary leadership of Creighton Ashwill, the New World has taken its first tenuous steps as a monarchy. Still reeling from the devastating effects of a virus two decades earlier, the people are ready to embrace their queen, ready for change. However, not everybody’s on board with the radical new government, least of all Jamie. But, as she’s finding, the tide of history is hard to resist.

Now as the presumptive queen, Jamie must navigate startling revelations about her past, hidden agendas by those in power, and newfound love to discover if her destiny will lead all the way to the throne.

What listeners say about The New World

I thoroughly enjoyed this book! The story, the narrator, the pace - all of it made for a great listen!

I hope the next two books are released as audiobooks soon. I know they have been published on Kindle, but as I don’t have time to sit and read, audio is my preferred method of reading books. I can do it while driving, cooking, cleaning etc.

Well done to the author and narrator.

I just want to say, I have enjoyed your book tremendously!!! I ready for the next to be recorded!!!!! I don't know if 3 books will quench my appetite. So I hope you start another series or a break off from this one!!! You did an amazing job!!!

Very Good Book! Will be waiting for more Jamie!

I usually only listen while driving! This book had me listening outside the car!