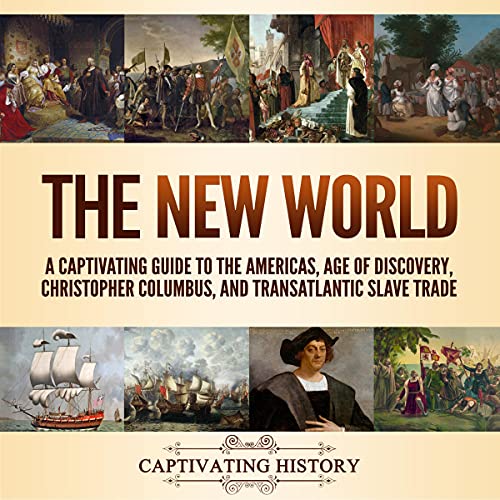 If you want to discover the captivating history of the New World, then pay attention...

Four captivating manuscripts in one book:

Some of the topics covered in part one of this book include:

Some of the topics covered in part two of this book include:

Some of the topics covered in part three of this book include:

Some of the topics covered in part four of this book include:

Get this audiobook now to learn more about transatlantic slave trade!

What listeners say about The New World

this was a great bundle of books to have. subjects are interesting and flow together

This book was longer than most books produced by Captivating History, but it worth every minute that I spent listening to it. Pretty much the entire history of the New World was talked about so that a good understanding of the Americas and the Caribbean Islands could be better pictured.
For the people that were living this age it must have truly been an age of wonder as discovery after discovery was made. The book talked about some of the lesser times that we have gone through, but in the longer run these times have only turned out to make all of us a better people.
True history when properly written is always better than fiction.

A thorough audio book on the history of the Americas, Age of Discovery, Christopher Columbus, and Transatlantic Slave Trade.

I wish I could give this 10 stars. this was actually a 4 book bundle and covered the history of North and South America. I knew about some of the histories of some of the indigenous people but this book revealed so much that I didn't know. Better than any textbook that I have read and much easier to read and understand.