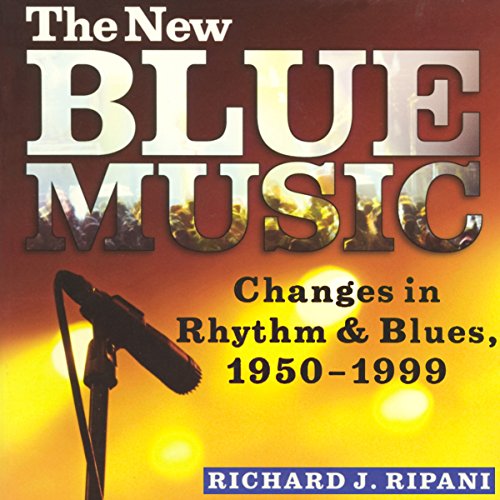 Rhythm & blues emerged from the African American community in the late 1940s to become the driving force in American popular music over the next half-century. Although sometimes called "doo-wop", "soul", "funk", "urban contemporary", or "hip-hop", R&B is actually an umbrella category that includes all of these styles and genres. It is in fact a modern-day incarnation of a musical tradition that stretches back to 19th-century America, and even further to African beginnings.

The New Blue Music: Changes in Rhythm & Blues, 1950-1999 traces the development of R&B from 1950 to 1999 by closely analyzing the top 25 songs of each decade. The music of artists as wide-ranging as Louis Jordan; John Lee Hooker; Ray Charles; James Brown; Earth, Wind & Fire; Michael Jackson; Public Enemy; Mariah Carey; and Usher takes center stage as the author illustrates how R&B has not only retained its traditional core style, but has also experienced a "re-Africanization" over time.

By investigating musical elements of form, style, and content in R&B - and offering numerous musical examples - the book shows the connection between R&B and other forms of American popular and religious music, such as spirituals, ragtime, blues, jazz, country, gospel, and rock 'n' roll. With this evidence in hand, the author hypothesizes the existence of an even larger musical "super-genre" which he labels "The New Blue Music".

Richard J. Ripani is a faculty member at Hume-Fogg Academic High School in Nashville, Tennessee. He is also a professional musician and songwriter in Nashville, performing with artists such as Ronnie Milsap, Ronnie McDowell, the Kentucky Headhunters, and Lee Greenwood. He has worked on numerous national television programs and earned gold and platinum records.

This work is very much like an academic paper and the average listener will probably not enjoy listening, especially if you are not familiar with notes, chords, tempo and other music theory concepts. If you're looking for a technical and statistical analysis of the topic, then this might be useful to you. If you're looking for a narrative that examines the historical, social and cultural influences on development of R&B, you will be disappointed and bored.

This is more for musicologists and people with background as it tends to be technical, but for them - it's the best. very high academic level. The opening gives a solid background about R&b, and the conclusion is very enlightening.

a bit of a slog

Narrator often makes mistakes and repeats the same words in multiple attempts to get it right. this might be because of the heavy terminology base of the text.

please note: music is described but not actually played.

Definitely geared towards an audience with preexisting music theory knowlege

Most books about Rhythm and Blues, Soul, and black popular music seem to follow a similar narrative, and are written under the guise of a socio-cultural analysis, with reference to politics, historical events, etc.

I have to knock off a star for 2 reasons. Firstly, the analysis for each decade is done in regards to the 25 top hits of the the decade (which I don't believe is even half the amount that should be covered to gain a true understanding of these topics), but mainly, as an audio book, it's hard to understand some of the lists being read out in terms of the numbers and statistics being presented to you. I actually don't seem to recall a list of 25 songs for each decade being read out loud, I assume it's an appendix in the book form, which is a major flaw.