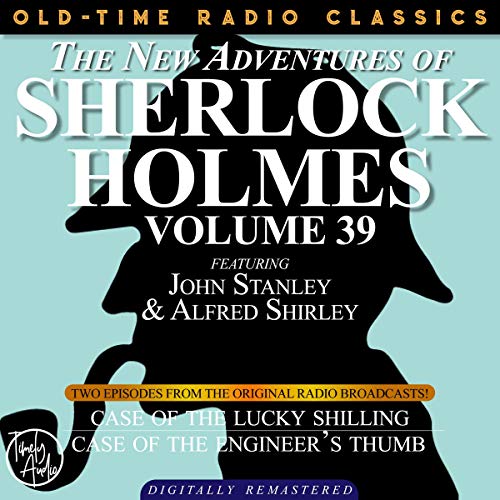 The New Adventures of Sherlock Holmes, Volume 39; Episodes 1 and 2

The world’s most famous sleuth returns in The New Adventures of Sherlock Holmes - a radio show which aired in the USA from 1939-1950, most famously starring Basil Rathbone as Sherlock and Nigel Bruce as Dr. Watson. In later seasons, Holmes was played by Tom Conway and John Stanley, and Watson was played by Alfred Shirley.

Episodes from 1939 through 1943 were written or adapted by Edith Meiser from the books of Sir Arthur Conan Doyle. From 1943 onward, most shows were written or adapted by the team of Dennis Green, Bruce Taylor, and Anthony Boucher or Green and Leslie Charteris who replaced Meiser who left the show over her disagreements with a sponsor over the amount of violence in the program.

What listeners say about The New Adventures of Sherlock Holmes, Volume 39; Episodes 1 and 2