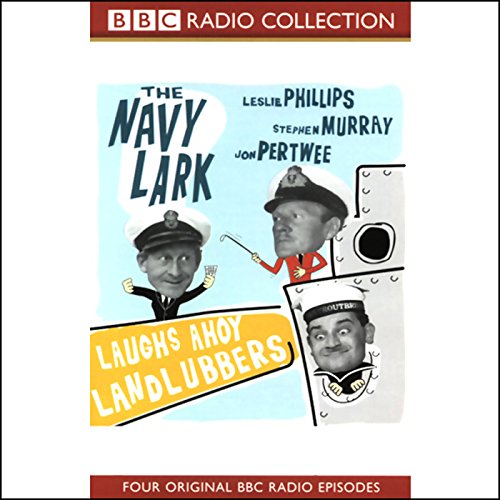 Climb aboard and join the merry crew in a high level NATO exercise, a promotion commotion, a spot of naval nepotism, and Hunt Ball complications in these four classic episodes: Mount Rumpus Atoll, Commodore Goldstein, Northampton Hunt Ball, and Cuthbert Joins the Navy.

What listeners say about The Navy Lark, Volume 1

Brought back memories from the past that I thought were lost forever. I can't wait to the next episode.

Before he was the Doctor.

Would you listen to The Navy Lark, Volume 1 again? Why?

Yes. Because the stories are so funny.

What other book might you compare The Navy Lark, Volume 1 to and why?

I would compare it to Douglas Adams books or Prarie home companion.

Any scene with Jon Pertwee.

Yes it is that kind of a book.

I loved Jon Pertwee when he was Doctor Who, and I've only seen guest star in couple different other things. But listing him do some many characters, makes me realise what a great voice actor and comedian he was to.

I first heard the Navy Lark on my university's radio station. I was laughing so hard it hurt within the first 30 seconds. I had completely forgotten about it till I stumbled upon it on Audible and I bought it right away.

If you've watched Dad's Army then just think of this show as the navy counter-part.

Oh heavens, that's the problem with growing older, suddenly the radio programmes that you listened to when you were little are available on Audible. If you are British then the Navy Lark is a real treat, but I don't think I need to tell the Brits that, they will all know. I do so envy the American audience, though I suspect that the Navy Lark is an acquired taste. I think it's the best thing since Scotch Eggs. Welcome Home, Navy Lark

Love this The Navy Lark vol 1

I,m dissabled. And spend most of my days bedded.due to ill health..I love listening to these sketches. They put a smile on a dreary winters day or night.just have to learn how to stifle my laughter threw the night instead of belly laughing out loud .xthank you for putting these on to audio.