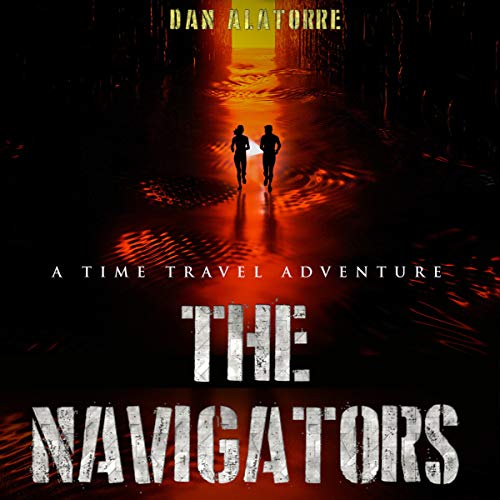 A freak landslide at a remote mine site uncovers a strange machine to Barry's group of paleontology students. Wary of corrupt school officials, his team takes the machine home to study it in secret, reaching only one realistic - and unbelievable - conclusion: It was designed to bridge the time-space continuum. It's a time machine.

Testing delivers disastrous results, sending one team member to the hospital and nearly killing another. When word leaks about the discovery, the ultimate power struggle ensues: the university wants it for funding, the power company wants its energy regenerating abilities kept under wraps, and a rival group wants to steal it for themselves. No one cares if Barry's team comes out alive.

Fleeing for their lives, the students must fight the school, the police, and each other if they want to learn the truth about what they've discovered - a truth with more severe consequences than any of them can predict.

What listeners say about The Navigators

Not a time travel story...

This book was a considerable disappointment. One might think that a book featuring a time machine might be a time travel tale. The time machine could have been any valuable object, and the story would be the same. Sadly it is plotted on the basis that graduate students and university faculty can make some monumentally stupid and damaging choices, and that this is humorous rather than juvenile. The main characters could easily have been the cast of Porky's a (very) little grown up. The narrator did a heroic job with very weak material, but could not carry off the book single handed.

The book might be suitable for older teens and younger 20-somethings who have some talent at suspension of belief, not for time travel but for the life choices made.

This book was very good. The narrator has done a wonderful job. There is a good combination of suspense, humor and a little romance.

My second read/listen from author Dan Alatorre. I don't restrict myself to a particular genre. I'm a sucker for anything with memorable characters and a story that keeps me guessing and a plot that keeps me turning the page. and this book did! Narrarator Vivien Swain’s narration added greatly to the book’s enjoyment. *Spoiler* The open ending of the book leaves it open to a sequel. I was given an Audible copy of this book & am voluntarily reviewing it. (RIP Marley January 20, 2014 - July 24, 2018).

Not much actual time travel. Not much action. Problems resolved to easily and main characters seem irrelevant.