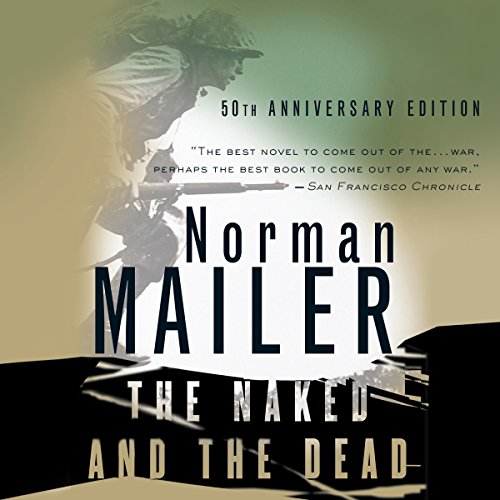 The Naked and the Dead

The Naked and the Dead

Hailed as one of the finest novels to come out of the Second World War, The Naked and the Dead received unprecedented critical acclaim upon its publication and has since become part of the American canon. This fiftieth anniversary edition features a new introduction created especially for the occasion by Norman Mailer.

Written in gritty, journalistic detail, the story follows an army platoon of foot soldiers who are fighting for the possession of the Japanese-held island of Anopopei. Composed in 1948, The Naked and the Dead is representative of the best in twentieth-century American writing.

Mailer’s first novel is epic moving fabulous and yet depressing. Read by his son how does an excellent job, the author weaves a tale that brilliantly emphasises the futility and horror of war but more than that exposes the human cost painfully and honestly.

I first started reading Norman Mailer’s books as a high school senior in 1970 with a paperback copy of ARMIES OF THE NIGHT, and have spent the years since reading all of his books—often reading them two or three times each--and considering Mailer as America’s best writer. Now we have the audible version of THE NAKED AND THE DEAD read by his son, John Buffalo Mailer.

John does an outstanding, professional, insightful, and loving job with the performance. I’ve listened to hundreds of audio books, and John Buffalo Mailer’s performance ranks among the best. I’m sure Norman would be extremely proud of him. I hope that John narrates other books by Norman Mailer that are not available as audio books, such as DEER PARK, THE EXECUTIONER’S SONG, WHY ARE WE IN VIETNAM, and my favorite, AN AMERICAN DREAM.It’s a shame these books, and all of Norman Mailer’s books, aren’t available as audio books.

Thankfully THE NAKED AND THE DEAD is now available, narrated superbly by John Buffalo Mailer.

A stunning and horrifying story of the realities of war and human nature.
Brilliantly narrated!

I Really enjoyed the different voices that were made for each character!! Wonderful work here!

Could be an Oscar winning war film

It is anticlimactic, but that was the intention. Great character development and deep understanding of the pysche for the battle fatigued soldier. If done correctly, this could be adapted to film that would be a multi Oscar winner.

The performance was totally immersive and entertaining. John must have made his father very proud wish this.

If you could sum up The Naked and the Dead in three words, what would they be?

Generally a good performance. However, the accent used for Oscar Ridges sounds like a parody of Southern speech, sort of a cross between Uncle Remus and Foghorn Leghorn.

Characters seemed fake to me...

This novel is mostly character development with a modest WWII Pacific theater war story. The prose are very good.
Unfortunately, I did not find the characters quite believable. Perhaps this was partly because the novel is a bit dated, yet I have read many other books of this era that did not have this problem. The story was somewhat one-dimensional.

Gore Vidal considered this novel a fake, and I almost completely agreed with Vidal, for the exact same reasons.

The narration was quite good, without being particularly outstanding.

Boring uninteresting characters, dull plot, annoying narrator that says Fugg instead of fu@k. I never read the book, but is it spelled fugg in the book because it was written in the 40s and they did not want to be vulgar. Every time we took a ride in the time machine I cringed, oh shit here is another lame back story.

Not at all a fan

I have an infinity for historical novels, this is not one, extreme violence, is Mailer trying to use the book to convince us to never enlist. I shut it off after 1 hour and have never gone back to it, and I have read Unbroken. Violence in war is appropriate I understand that but much of what he describes reminds me of modern cinema with little character development and story line, but loads of gratuitous violence for violence sake.

Rambling at times but also very compelling. More about human morality and nature than of war. I found it thought provoking and difficult to put down.

not sure why this book is so highly regarded

it has its moments but the narrators delivery of different characters made them all sound the same, so easily got lost in who was being spoken about. Also the characters were all pretty horrible and had not features that made me care about them at all.