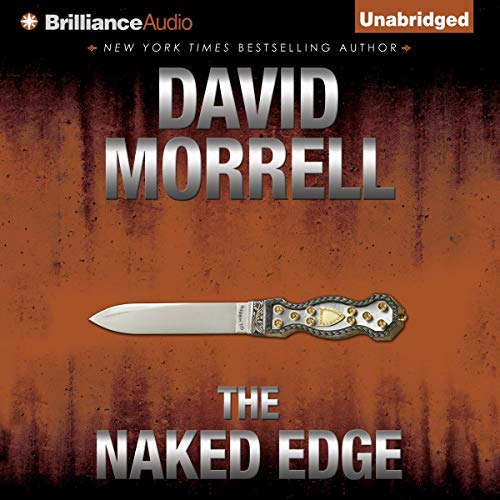 Once they were boyhood best friends, playing in the woods near their homes, pretending to be soldiers surviving behind enemy lines. Grownup, they belonged to Delta Force and later worked as protectors for the world's best security company. Now their lives have taken drastically different paths, pitting them against one another, forcing them to play their boyhood game again, this time to learn who dies. The survival of a great city hangs in the balance as two friends-turned-enemies hunt one another and discover that there's a line between predators and prey, a line that's called The Naked Edge.

What listeners say about The Naked Edge

There are two books in this series, this is the second. The first was very enjoyable and satisfying this book much less so. I haven't been able to put my finger on why. I think one reason is Dick Hill. Stefan Rudnicki narrated the first book and does a better job creating a cool under pressure operator tone and cadence. And I think he did a better female voice. Dick Hill seems to have an edge and almost pushy tone to his reading. The story is also a bit stretched with some elements barely tied together. It just wasn't as satisfying as The Protector.

Would you try another book from David Morrell and/or Dick Hill?

I dunno - maybe - this was my first book by Morrell.

Childhood rivalries and adult retribution. The action was too over the top! Almost too far fetched.

This was not Dick Hill's best reading. Usually, he does a bang up job. And I've listened to many of his narratives...but this one was odd. His voice slurred often and the accents he tried were wrong. The female voices were "off". Maybe he was as bored with the story as I was.

Do you think The Naked Edge needs a follow-up book? Why or why not?

Nope! Didn't much enjoy the characters....so I don't feel the need for a sequel.

I'd forgotten how much I love Dick Hill! His oratory skills truly bring stories to life. I get the impression that this isn't the first story featuring these characters and now that I've finished this one, I'm compelled to find out of my guess is true. I generally love the longer stories; must be leftover from my impulses as a kid to always check out thicker books from the library. This story is full of action and suspense; getting lost in their world was easy as there was just enough description. Sometimes authors can lose me with their habit of describing every little thing in minute detail. This author didn't fall into that trap. I'll definitely be adding him to my list of must read authors. A+

Much better than expected

This book was a good listen . . well performed with a feasible, if not improbable plot

Gripping till the end. Great research

Great story line and live Mr Morrells research of the details. Feel like he's lived it. Brings his charters to life

If you could sum up The Naked Edge in three words, what would they be?

Have not listened to David Morrell in a long while...The Naked Edge started strong and stayed strong to the very end. Did not disappoint.

Would you try another book from David Morrell and/or Dick Hill?

After Listening to Rambo I thought I'd listen to this book. The author is a good story teller, but in this book he really dragged the story down with an over abundance of minutia time and time again. There'd be some really good action going on, and then we get into some long explanations of things or a several minute description of them going through a car for a bomb. When I'm going down the road I want the story to flow and not keep going through a slow and go mode so much.

My other problem is Dick Hill's reading. His voice reminds me of James Gregory who played Inspector Frank Luger on Barney Miller. His voice would be great for old gangster stories, but for stories like this it came off as over dramatic quite often. Unfortunately Frank doesn't have a lot of range on his voices so the female voices pretty much sounded all the same, and not a lot of difference on the male voices either.

The book and presentation isn't terrible, and some would most likely enjoy it more than I did. Like I said. The story itself had a lot of good parts to it, but kept getting bogged down in my opinion

Dick Hill was the most irritating narrator I have ever had to endure. The story was excellent and engrossing but when Dick was just just narrating he was fine and the book was interesting.
But any conversations all sounded like a bunch of members of the Lollipop Guild screaming at each other.

Really like how this series is going. Good characters and story line. looking forward to the next one.

good but can be better

Dick Hill always brings his 'A' game and can turn an ok book into a really good book.