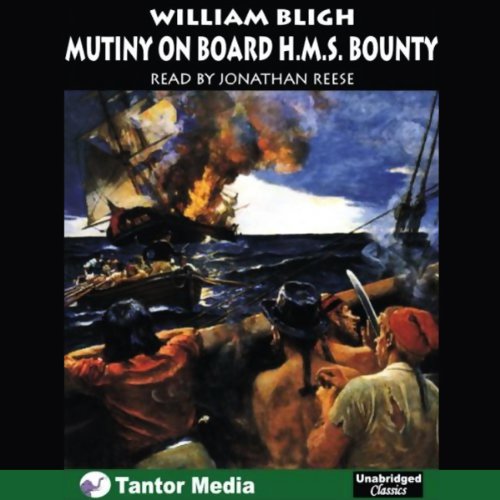 The Mutiny on Board H.M.S. Bounty

Works of fiction, among them the Charles Laughton film, Mutiny on the Bounty, paint William Bligh as an ogre. Most paint Fletcher Christian, leader of the 1789 mutiny, as an honorable junior officer whose rebellion was justified.

In a personal but objective narrative based on the Bounty's log, Bligh himself tells of the stormy voyage to Tahiti, his crew's insatiable attachment to the island paradise, and the incredible 3,600-mile journey to safety after the mutineers cast him, and 18 loyal crew members, adrift in a small, open boat with few supplies. Bligh's detractors say this narrative has many distortions and omissions; others judge it a remarkably dispassionate record. You can decide.

What listeners say about The Mutiny on Board H.M.S. Bounty

This is a wonderful professional narration of one of the most interesting historical seafaring works ever. The description of 18th century Tahiti is fascinating, as is the description of Captain Bligh's open boat journey after the mutiny. Although written in the 18th century, it is very understandable today.

Not for the casual reader, but if you have a strong interest in the HMAV Bounty adventure you'll enjoy Bligh's narrative of his trek.

this is the captains log over a long time with detail each day.

There is only one location for this "work".... In the bin. I have several different history novels. This is the second worst I have ever delt with..... SAVE YOUR SELF the trouble