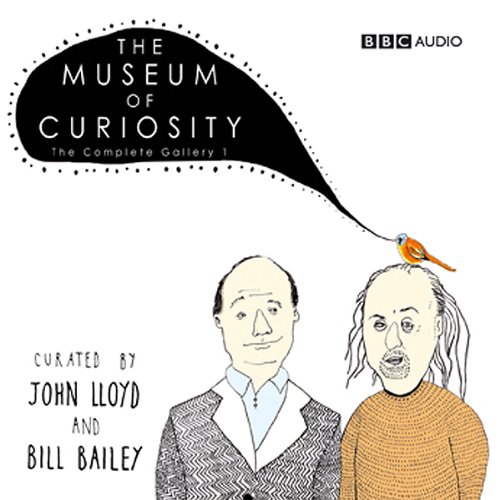 The Museum of Curiosity: The Complete Gallery 1

The Museum of Curiosity: The Complete Gallery 1

Join Professor John Lloyd and Curator Bill Bailey as they plunge down the badger hole of ignorance in a search for the universe's most mind-boggling oddness's.

The Museum of Curiosity is BBC Radio 4's monumental comedy edifice, and the only one with gargoyles in the foyer. It allows nothing inside unless it makes you scratch your head, stroke your chin or, at the very least, go 'Hmm'. Secondly, it is almost completely empty. Fortunately, helping to fill its vacant plinths is a gathering of the world's most original minds.

So listen in as Sean Lock, Brian Blessed, Alastair Fothergill, Ben Elton, Fran Beauman, John Gribbin, Alan Davies, Ronald Hutton, Jonathan Miller, Victoria Finlay, Arthur Smith, Richard Fortey and many more agglutinate an exhibition of the wondrous and impossible that includes the beginning of the universe, the entire Battle of Waterloo, the real Father Christmas and a quite interesting, relatively new way of knotting a scarf.

What listeners say about The Museum of Curiosity: The Complete Gallery 1

Packed with information, personality, and humor

Interesting, educational, and entertaining. I learned more than I expected, will listen to this again, and probably again. My only complaint is that the price is kind of high for the amount of time. To own the entire series will be over $50 if I continue to buy these, even at the discounted rate of platinum membership - hope these will be for offered on sale in the future instead.

A fun listen that makes you think

Simple concept, but well done. 2 hosts, in character as curators of a "museum of curiosity," each show has 3 guests from a variety of backgrounds, who "donate" an item to the museum (such as "the Nottingham Alabasters" or "Epping Forest" or "Silence") and then discuss why they feel it's worthy of inclusion. Fun way to explore odd topics in a half-hour format. Some guests are well-known, others not, but no dunces among them. I'd like to find more like this.

Also well-recorded, you can hear what everyone says, clearly.

As a fan of QI, I was excited to find this program and I wasn't disappointed. Each of the individuals, whether they're comedians or scientists, brings their personality along with their concepts for curation. I like that the show is recorded with a live audience. It really comes to life (and makes you feel better about laughing out loud). I never get tired of listening to this.

This comedy show from the researchers of QI is full of astounding facts, charm and quirkiness. It makes me laugh out loud at times (which can be a bit embarrassing on the train), and more often than not evokes the "that's interesting!" response. Season one, hosted by John Lloyd with Bill Bailey, consists of six 27-minute episodes, each with three special guests. Each guest is invited to select something to donate to the virtual museum, which is then used as a topic for discussion, revealing fascinating facts and a good dose of humor. These donations range from The Battle of Waterloo to a pineapple, and discussion wanders around the realms of science, history and philosophy. Although gentle in tone, it's dense with content, and stands up well to repeat listens.

Love the music with bill bailey. Brilliant throughout. Full of fascinating but pointless facts, much like QI. Brian Blessed is amazing!

Has The Museum of Curiosity: The Complete Gallery 1 put you off other books in this genre?

the first episode with Blessed

I really enjoy the individuals but together it is just something I would switch off on four extra, sorry xx

Would you listen to The Museum of Curiosity: The Complete Gallery 1 again? Why?

Posably not again because I tend not to 're read'.

What was one of the most memorable moments of The Museum of Curiosity: The Complete Gallery 1?

What does Bill Bailey and John Lloyd bring to the story that you wouldn’t experience if you had only read the book?

Their timing and nuances.

Looking forward to working through the rest of the series.

If you've never heard The Museum of Curiosity on Radio 4 then you're missing a work of pure genius. This series is funny and interesting in equal measure and, no matter how many episodes you listen to, it never gets dull. Treat yourself to this audiobook, you won't regret it and I can guarantee you'll end up buying every "Gallery" there is.