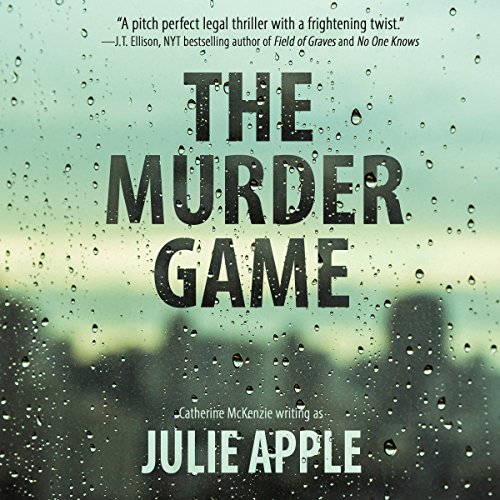 Ten years working as a prosecutor have left Meredith Delay jaded and unsure of what she wants out of life. She's good at her job, but it haunts her. Her boyfriend wants her to commit, but she keeps him at arm's length. Then Meredith is assigned to a high-profile prosecution involving the violent murder of a fallen hockey star. At first, it appears to be just another case to work. But when her old friend Julian is accused of the murder, it takes on a whole new dimension.

Meredith, Julian, Jonathan, and Lily were a tight-knit group in law school. But now, Jonathan's defending Julian, and Lily's loyalties aren't clear. And when Julian invokes a rare - and risky - defense, Meredith is forced to confront their past. Has something they played at as students finally been brought to death?

What listeners say about The Murder Game

What would have made The Murder Game better?

This entire story just made me upset

What was most disappointing about Catherine McKenzie writing as Julie Apple’s story?

The characters, especially Meredith, she had no common sense and I got tired of her whining throughout the story

If you could play editor, what scene or scenes would you have cut from The Murder Game?

The question should be what I would leave in, I would cut more the half of the story

I don't think I'll be downloading anymore of her books

The story of the pathetic protagonist

What a great story!! Def worth the listen I received a free copy and left my honest review

I mostly wanted to listen to this because of Catherine McKenzie's Fractured, whose main character was Julie, writer of The Murder Game. I liked the idea of a tie-in. Ultimately, I prefer McKenzie's other works more. While the ending wasn't a huge surprise, it was still interesting to listen to how the club implemented their plan. The narration was pretty good, with distinct voices. The one thing that drove me a little crazy was the huge time gap between one chapter and the next. I kept checking my player to see if it had stopped/frozen.

I loved everything about this - the dual timeline, the court trial (naturally ;)  ) and the narration. The ending was sublime ....and totally reflected the story's title. Had it really all been a game? Is there such a thing as the perfect murder? Meredith Delay  works for the Crown Prosecution Service and has achieved great heights for someone so young. Her commitment to the job is unquestionable, and her personal life has suffered as a result. When her boss insists she take on a high profile murder case where the defendant, Julian, is an old law school friend of hers, she worries her past friendship make her unsuitable to try the case. These worries are compounded further when she learns he is to be represented by her ex-boyfriend, Jonathon. Along with Lily, they'd been a tight-knit group in law school. Is she really the right person to prosecute him? Her boss believes her past connection is an asset, and keen to prove him right Meredith builds her case against Julian.  Told in alternate timelines between the present day trial and Meredith's time in law school, the story builds gradually, revealing snippets about each character in a gradual manner, which then come to the fore as the trial progresses. The clues are there, but joining them into a cohesive whole comes later as the story heads towards a delicious ending that had me listening late into the night.  I was completely hooked and waited for the verdict with baited breath. But there was more to come, and boy was that a gem worth waiting for. It certainly left me wondering if the jury had returned the right verdict, and I totally understand the comparison to How To Get away With Murder.  This is a cleverly-written, intense legal thriller that I have no qualms about recommending. If you a pacy thriller with intrigue and suspense aplenty, you'll love this.

Portrayed are the years of a law student to present as an attorney. A court case defending Julian a former classmate, it took on a different meaning for her. A good narration brought the emotion and tension to the case. Given audio for my voluntary review and my honest opinion

Great book. I had a few things that I didn’t love about it, but overall it was great. It was well written and very creative.

great story-within-a-story I love it

very creative way to write this book I loved it I read the other book and it was good as well . my only problem with this read wasn't with the author... it was that the narrator, who I usually love, paused way too long in between chapters. I had to go back to my phone to see if it had shut off because she was pausing so long.

The Murder Game offers alternating time frames that allows readers to follow a set of characters back and forth from their social/learning time in law school to their professional roles in the courtroom. Personally, I didn't think that some of these characters' roles in legal proceedings were ethical or realistic because of their known histories together but it was entertaining nonetheless to follow the same characters throughout the entirety of the book. All the legal what-if scenarios processed by the characters in The Murder Game kept my brain active and thinking so this book was a win-win in terms of being an entertaining brain-teaser of sorts.

The resolution of the present-day courtroom drama was a bit of a let-down if I'm being honest. This could have been my fault though. I had this book built up so much in my head after the 5-star experience of Fractured so who knows. Check it out regardless! Catherine McKenzie (aka Julie Apple) is a rock star!

Do you think The Murder Game needs a follow-up book? Why or why not?

The Murder Game is a legal/thriller novel written over ten years ago by Catherine McKenzie. Although it remained unpublished for all of those years, the book itself was featured in Catherine McKenzie's 2016 novel: Fractured and inspired much of the storyline. Shortly after the release of Fractured, Catherine McKenzie self-published The Murder Game under the pen name: Julie Apple (who was noted as the book's author in Fractured). If you are not familiar with either of these novels, I'm sure this sounds confusing, but trust me...it was such a clever move on McKenzie's part. As an initially confused reader myself, I can now confidently say that each of these novels stands on its own, and in my opinion, there is no right or wrong reading order if you are interested in reading both. I chose to read them in order of their formal publication dates and it was fine. I truly believe it would also be fine the other way around because these are indeed two very different books.

My favorite quote:"Everyday is full of choices."