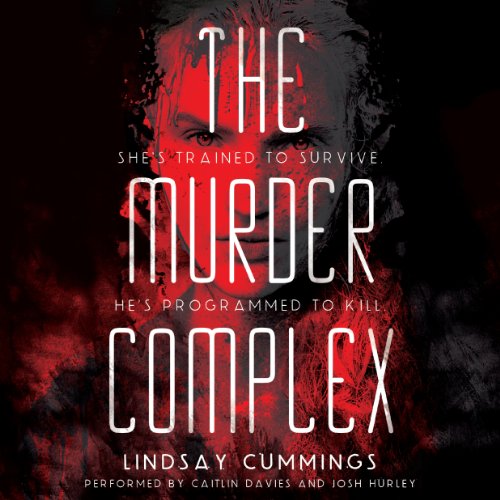 Close your eyes and feel your enemy's weakness.

Welcome to the Murder Complex.

But we are here.

And we control your every move.

What listeners say about The Murder Complex

Kept my interest and made me want to keep coming back to hear what happens next. The narrators have very likable and expressive qualities as well.

Lindsay Cumming's debut novel is the next addictive YA dystopian. Although it started a little slow, it picks up and the pace and doesn't slow. Just as you think you have figured it out - you haven't. I can't wait for the next twist she has for us.

I found the performance cheesy which may have tainted the story for me. I purchased this audio book in 2017, started it, stopped and forced myself to listen this month since I’m stuck with it. It’s a typical dystopian tale, if you can get beyond the performance, it might be enjoyable.

I absolutely love this book & am excited to start the second of the two-part series. I have never listened to a book where I felt so much a part of the story- I love both narrators!!
I hated for it to end, but thankfully there is another...

A dark and bloody terrifying dystopia...

Where does The Murder Complex rank among all the audiobooks you’ve listened to so far?

THE MURDER COMPLEX was bloodtastic read that I devoured. I was allured by the dark essence and the fast paced plot that kept me engaged and entertained until the very last page! It was a bloody world, full of twist and turns that satisfied.

But to keep it real, THE MURDER COMPLEX was a good book, but it had it's faults. There where many aspects that I enjoyed, but many that I didn't. One that I really enjoyed was the world-building—the backbone to THE MURDER COMPLEX. I liked that it added it's own touch of originality to the dystopian world, and that it delivered on that aspect of the book.

Another thing that I really loved was that it was bloody! I don't really know what that says about me...lol, ;) but I loved all the blood and murder, and the chase. It was thrilling to live through it all through the characters eyes, and see and feel what they felt. It was definitely a terrifying world that I would never want to live through!! I do give the author mad props for creating such a complex world that was dark and deadly, and awesomely thrilling!!

But there were a few things that drove me insane. Manly it was just one of the characters that I didn't like for numerous reasons. Zephyr was one of the main POV's and the love interest that drove me insane. First, his name annoyed the hell out of me!! I mean what kind of name is Zephyr??? That was the first strike against him. Then he said this repetitive word, Skitz's." What hell does Skitz's mean anyway?? I looked it up, and it's the meaning for Schizophrenia. WHAT??? What idiot would go around saying that all the time?? Then, when he meets Meadow, the other main POV, he starts acting like a little love sick puppy that would bend the earth for her. I mean he JUST met her and he was acting like that. Actually, I think he said that he might love her before he was even formally introduced to her. He was just a total turn off from the beginning, and then it just kept getting worse. Their was just too many reasons why I didn't see eye to eye with his character.

Another issue I had was the POV switch. I can usually put up with multiples POV's, but don't prefer them. And THE MURDER COMPLEX was no exception. I really only liked Meadow's POV. Zephyr just drove me crazy, and that made me hate him even more when it would switch to his POV.


Commandment One: Honor the Initiative.

Commandment Two: Thou shalt not attempt to cross the perimeter.

Commandment Four: Thou shalt not harbor useful items from the days before.


In the horrifying world of THE MURDER COMPLEX, where murder rate is higher than the birthrate, and killing becomes as easy as breathing. Meadow, a girl just trying survive in this blood-soaked world she was born in, is ready to do the unthinkable in order to keep her family alive—even if she has to kill for it...

Fifteen-year-old Meadow Woodson has been trained to kill. Her only goal in life is to survive, survive and keep her family breathing, and that is by any means necessary.

KILL OR BE KILLED...

Meadow's father has been training her how to fight, kill, and survive for years. Preparing her for her chance to take the placement testing—where everyone gets the opportunity to prove their worth for the honor of a job in their society. He's been readying her for when the time comes that she will have to kill or be killed, for the job that their family so desperately needs. And it's now Meadow's time—kill or be killed.... Meadow is determined to be the last one standing, she's ready to embrace her training, she's ready to shed blood, she's ready to kill....

But then Meadow's world starts to fall apart even more when she meets Zephyr, a Ward of the state—unworthy in the eyes of The Murder Complex. But something is different about Zephyr, he's not like the other Wards, and she feels compelled to help him when he makes a stupid decision that could cost him his very life. And then the web The Murder Complex spun many years ago begins to unravel, and the truth behind it all starts to slowly surface, and many facts are revealed that could shatter their world to the very core. Meadow's world becomes a race against the clock as she tries to understand who—or what Zephyr is, and what really is The Murder Complex, and why do they want her so badly, but most important, how is her mother tied into it all. As if that's not enough, Meadow has to cope with all this while trying to find and rescue her family that's just become missing.

Like I said above, it was a good book with it's flaws. I was expecting more from THE MURDER COMPLEX then what I got, but it still satisfied enough to keep my attention and have me engrossed in the characters and the overall plot of the book. I'm still eager to read the next book and see how it all plays out, because that ending was intense and definitely has me craving the next book!!

Overall, THE MURDER COMPLEX was a thrilling start to a fun series that I know I will continue to enjoy! I had my issues with this book, but I also really enjoyed it at the same time. I've been eager to read this book after hearing about how bloody and dark it would be, and it overall didn't disappoint! I think if you enjoy dystopia, mixed with a touch of Sci-f, thrown into a bloody dark world, then you will definitely enjoy this one!!

NOTE: I received a physical ARC from Harper Teen for reviewing purposes! All opinions expressed are my own and are not influenced in any way!

Has The Murder Complex turned you off from other books in this genre?

No. But I need to be invested in these characters. Otherwise, why subject yourself to the dark heaviness of the story?

Sure. Some exaggerated "sinister" voices, but I guess that's what they wanted. Those poor narrators must have been so depressed with this!

Serious disappointment. Where is the hope? Who should I root for? Even the lovey dovey scenes were dark!