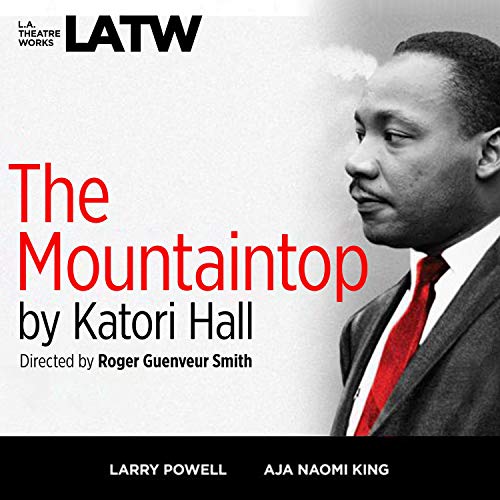 On April 4, 1968, Martin Luther King Jr. was assassinated outside of his room at the Lorraine Motel in Memphis. What happened inside room 306 on the evening of April 3 is the subject of Katori Hall's The Mountaintop. Hours after King's final speech, punctuated by his immortal line "I've been to the mountaintop", the celebrated reverend forms an unlikely friendship with a motel maid as they talk into the early hours of what will be his final day.

Recorded in Los Angeles before a live audience at The James Bridges Theater, UCLAm in May 2016

What listeners say about The Mountaintop

I didn’t know what to expect when I bought and downloaded this but it simply blew me away. Incredibly powerful.

Riveting! Timeless! Hits you in the gut! Loved the sound effects. Will listen again. Still aching within.

after all he was just a beautiful man

a messenger meets with king to deliver a vision only a King can understand. beautifully played.

I only wish they spoke slower so the performance would last longer. A powerful piece and a powerful performance.

This Is Well Worth It

The Title is miss leading .Not in good taste. I wouldn't recommend this book at ALl.

Surprising!
I did not know about MLK’s mountaintop reference in his speech.
If you swallow or ignore some bad language it is an unforgettable performance.

The performance (voices and sounds) is just great.

Quick-paced and to the point, sharp and filled with inference, innuendo, and in-your-face reality, this play explores the confusion, angst, regret, and anger of a man about to die. But, not just any man. This work allows us to imagine the workings of MLK’s brilliant mind, to see his very human flaws, to wonder what he might have done and said when introduced to an angel of death and presented with his own demise. WARNING: This play is very real. For some, it will challenge ideals, and for some, it will offend. Listen to it, and imagine the man, then listen to it again...and again...as I did.

I listened to this at work today and have to say I was touched. Martins struggle with his impending death has me rethinking my affairs with my loved ones and purpose. This book depicts that Martin was human with fears, weaknesses and errors of his own. I felt for him and after the book ended I sat in silence for awhile absorbing the message. What a great man. I am truly humbled. Thank you for this story

This audio play was deeply satisfying. I missed the opportunity to see a live performance of the play when it premiered, so this was a wonderful find.