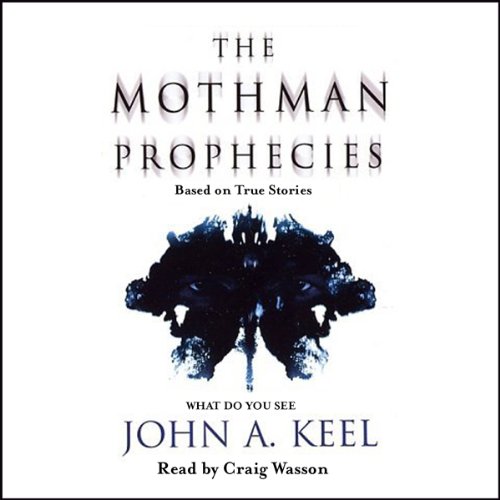 By: John A. Keel
Narrated by: Craig Wasson
Length: 9 hrs and 30 mins
Categories: Non-fiction, Unexplained Phenomena
4 out of 5 stars 4.0 (21 ratings)

By: John A. Keel
Narrated by: Craig Wasson

West Virginia, 1966. For thirteen months the town of Point Pleasant is gripped by a real-life nightmare that culminates in a tragedy that makes headlines around the world. Strange occurrences and sightings, including a bizarre winged apparition that becomes known as the Mothman, trouble this ordinary American community. Mysterious lights are seen moving across the sky. Domestic animals are found slaughtered and mutilated. And journalist John Keel, arriving to investigate the freakish events, soon finds himself an integral part of an eerie and unfathomable mystery.

Translated into over thirteen languages, John Keel's unsettling account of what he encountered in Point Pleasant has long been regarded as a classic in the literature of the unexplained. It is now the basis of a major motion picture starring Richard Gere and Laura Linney.

The Mothman Prophecies is also available in print from Tor Books.

This is a great book. A little dated now but still and interesting listen, I highly recommend it.

Keel, is a bit of a narcissist, but it's an entertaining listen none the less.

While I enjoyed it I thought the content around the actual Mothman sightings were fairly limited. That said interesting to listen to the events around the sightings and goings on at that time

Was hoping to hear about the mothman and a decent story and investigation...just rambles about various differnet ufo encounters and encounters with MIB
very disappointing.
Not audible fault, book was well read and performed. content was the issue. Struggled to finish

A word to the wise: If you're looking for a novelization of the Richard Gere movie, you might want to think twice before ordering this book. John A. Keel's "The Mothman Prophecies" is not a novel, nor is it fiction. It is the sober account of a professional journalist who also happens to be a paranormal researcher. As such, it is one of the best books of its genre. By way of the mysterious figure of the Mothman, who haunted Point Pleasant, West Virginia, in the late 1960s, Keel puts forth his grand unified theory of all things paranormal, which connects such seemingly diverse phenomena as ghosts, fairies, UFOs, men in black, Bigfoot, the Loch Ness Monster, Mothman, angels, demons, and even The Shadow, the pulp-magazine crimebuster. Keel's clear, engaging style lends credence to the strange goings-on that he collects and documents, and the conclusions that he draws not only ring true but also linger long after the final page. As the Mothman mystery deepens and the author's life begins to imitate a David Lynch film, readers may want to turn on a few extra lights, but they won't be able to turn off this book.

The Nature of Human Perception

Keel's The Mothman Prophecies is a book that explores the unknown--human consciousness. The theme of the book is clear from the beginning. Keel is more interested in the root causes of phenomena than the evidence. And the cause, for him, lies somewhere in the mystery of human consciousness and perception. It is a fascinating read. If you like pyschology and parapsychology, this is the pinnacle.

I'm a zoologist, and I ejoyed this book thoroghly. It was insightful and knowledgable. Some people complain that the title was "decieving", due to lack of information on the Mothman. Keel only spends a chapter talking about this winged creature, but what was there was very interesting. Being in the field of zoology, I come across cryptids like the Mothman all the time. the most popular being obviously, bigfoot and nessie. If these subjects interest you then you should find this to be a very interesting listen.

Before buying this, you should know that although it WAS the basis for the film of the same name, it is not a novelization of the film. Keel's MMP details the actual events that transpired during a thirteen month period in Point Pleasant WV and the Ohio Valley in the late 60's. It's an incredible read and nicely done in audio book form.

Although I am typically disinclined to award much of anything with five stars, I did in this instance in part because I felt it was seriously underrated here and felt I needed to try to restore some balance. It is an exceptional read. I don't think many books offer the kind of dense information (anecdotal and researched) this one offered. Let's be honest, the subject matter isn't bad either. I personally hate the subject of UFOs and was relieved that this was not about that as such. I very much liked his general take on things as well. He didn't fall in lock step with any particular group, and tended to abandon (to a great degree) preconceived ideas. That made for a far more credible read, whether or not you come to his ultimate conclusions (I do not, but appreciated much of his logic) and did find merit to many/most of his conclusions/observations along the way. Whether you approach this as fiction or non-fiction, the read is addictive and moves at a good clip. I enjoyed it very much…and yes, I double checked the doors before I went to bed. Excellent read. By the way if you like this, I would suggest my other top choice this year, Michelle Paver's, Dark Matter--completely fictional but very believable. I am certain many true and similar stories out there have happened before. Cheers!
Hadassah

A good pick up.

I chose this title based on the reviews slagging it for not being based on the movie. This is pretty much in documentary form, which I find more interesting than the movie, and doesn't include the Hollywood embellishments. Perhaps the most intriguing aspect of this story is the linking of several phenomena. From mothman to UFO's to poltergiests and the infamous MIB, Keal links them all together. Definitely for the conpiracy theorist.
I was a bit disappointed with the second half of the book though. At points it was more far-fetched than I was willing to go, which almost threw the entire story out for me. Still, the first half was excellent and aside from the problems with the second half was still a very enjoyable listen.

Not what was expected, but suprisingly better!!

As has been stated, this book has little in common with the movie, and though I loved the movie and would have liked a more focused examination of it, this book turned out ot be infinitely more riveting. This is no novel, it is a collection of observations expressed by a journalist with a literary style that is absolutely captivating, amusing, and simultaneously disturbing. Instead of shocking us with outrageous and overly colorful depictions of events, John Keel has an amazing ability to evoke the inherent eeriness in what might seem the most mundane interactions, which when carefully analyzed, provide profoundly unsettling conclusions. He does not force his interpretation of these events, but leaves the reader to make up his or her mind. If you want a book to capture your imagination for hour upon hour on end by a talented author with a wry wit and healthy amounts of both marvel and cynicism, you will listen to this book several times without any loss of interest.

Without question, not the movie.

So this book was not the movie, as alot of the reviews state, and that is fine. But where it goes wrong it that it has very little, (almost none) of material relating to the Mothman. It is all about UFO's. The book pretty much just consists of account after account of UFO signings, encounters, and visitations. This is all fine if the book was entitled "Strange UFO Encounters" but it wasn't. It was titled the "Mothman Prophesies" and it just didn't have anything about either the Mothman or events surrounding his sightings. The book is interesting and well done. It just doesn't have anything in it about the topic that made me what to listen to it to begin with.

Not really a book

This is not really a book but a series of loosely connected anecdotes. They generally start something like this - On June 13, 1961 while Bob Smith was walking down the street he encounter a large bat-like creature.

The problems with this book are not related to the subject matter but how it is presented. Lots of random sightings that aren't linked together into any kind of narrative and are not supported by much fact.

I am very interested in this topic but this book was completely unengaging.

A mixed up jumble...

...of sightings, strange occurances, UFO's, Men in Black and other such things. Keel goes to great lengths to tell all about each event that happend in Point Pleasant before the bridge disaster. He also backs up many events with other sightings and visits and occurances, until your head is swimming. The biggest problem is the lack of continuity or timeline, and cross-referencing with events he's already covered (which is hard to go back to in audio format...if you really want to go back in the first place). While at the heart of the book is an interesting tale of bizarre events leading to a strange disaster, there is a lot of extras to get through.

The narration is well done and easy to listen to.

I very much enjoyed this audio book and the style of Keek's writing. The film of the film version only really scratches the surface of does not reflect the weird things that were happening in the run up to the collapse of the bridge at Pount Pleasant. The narration is very good by Craig Wasson and I will look out for other titles where he is the narrator.

Keel describes events and characters that come alive in this presentation and the story caputered my imagination despite my skeptical view point.

A bit over the top.

I haven't got a problem with the quality of the recording nor the reading so in that respect it's not at all bad. My only complaint is the bounderies of the fantastic are breeched so readily. I mean the guy who wrote this at once debunks certain myths and at the same time promotes others. But the one thing that got me to turn towards my player and vocally exclaim 'WHAT??' was when he suggested that a person in someones house was either wearing electric socks or was a remote control android programmed to interview people. And scarily he says it with all seriousness.
I'd recommend you only buy this if you've got money to burn.

I guess it's my fault as I should've read the bumph thoroughly.

The performance is fine and well done, but the content of the book is utter nonsense. Listen (or read) in mounting terror of the author's ego, never mind his wild ramblings.

Important if not vital

Whether you believe in high strangeness or not this is one the most vital books on the subject. Belief is your enemy anyway - just accept that in some places and at sometimes reality can be a little thin .

John A Keel. Brilliant book yet again. well worth a listen. for anyone interested in the paranormal.

Narrator delivered did a great job conveying the authors thoughts and views. Stories and 'victims' had lots of intricate details. Gave me a new perspective on the film.

A true classic, a truly in depth study of the phenomenon's that gripped a generation. there are not many people that would have made such striking insights into their own behaviour and truly seen how their behaviour influenced the way that the whole scenario played out.