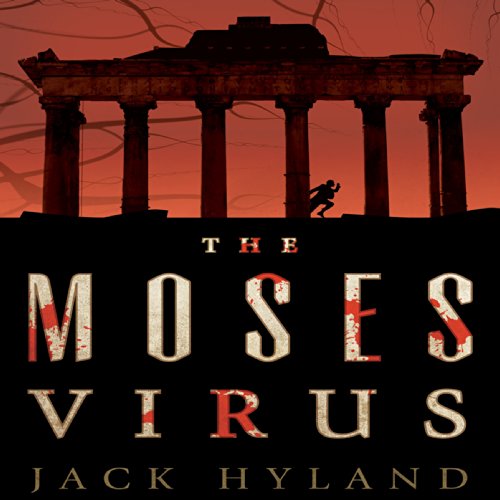 Modern-day Rome: Two American archaeologists suddenly die in an underground passageway in the Roman Forum leading to the buried rooms of Emperor Nero's Golden Palace. The Italian authorities conclude the deaths were caused by a devastating and highly contagious virus. Tom Stewart, an NYU forensic archaeologist who was present when the deaths occurred, becomes entangled in the race to find the supply of the virus - a race involving many powerful players desperately seeking the deadly contagion. Stewart must find and destroy the virus before others harness its sinister power.

The Vatican, foreign groups, the world's largest genetic seed manufacturer - all have their reasons, and none will stop until they succeed, no matter the cost or risk to millions of people if the virus escapes and causes a pandemic.

What listeners say about The Moses Virus

Gets worse as it goes along....

This is the only book in the past two years that I couldn’t finish. I made it to one hour before the finish line before I just couldn’t do it any more. The writing is at a novice level at best. I can sum up the style of writing below.

Most writers: “They jumped off the plane, quickly rented a car and sped after the men who stole the virus.”

This book: “They quickly got off the plane, and walked into Hertz rent a car. They noticed all the fine details of the linoleum countertops, the blue plush chairs in the corner, and when the clerk glanced up at them with a pleasant smile, they rented a blue 2010 Saab with grey interior. What they failed to notice however, we’re the two men standing behind them that had been following them for the whole book.”

The whole book is painfully obvious and comes across almost like the author ran out of words, and just went back to throw in repeating phrases and adjectives to lengthen the listeners torture.

No. I began to lose interest in the book after the comment about the Mayans building Machu Picchu....tell me, who was the editor of this book.

Something by Jennifer Hiller

What does Edoardo Ballerini bring to the story that you wouldn’t experience if you just read the book?

I did enjoy his performance. It was apparent that he understood the characters as Hyland was trying to portray them.

Could you see The Moses Virus being made into a movie or a TV series? Who should the stars be?

No. Although the premise was good, it seemed to be written with the thought of it being made a movie.

Good timing in the age of a real pandemic. Story was well written with no lapse in the action

Archaeology student die mysteriously, covered in fungus. The lead character is more interested in the pretty reporter. This is stupid.

Nerdy college professor gets dragged into international game of cat and mouse with female side kick. No logical reason for anything that happens except the final few chapters when these ywo geniuses realize that they need professional help. I made it to the end out of sheer stubbornness and the desperate hope that maybe there'd be a twist ending.

Poorly researched and not believable. I need to believe that it could be possible. Replace the main two characters with kids and you have nick movie.

This book is just awful, just skip this one. Life is too short to listen to bad books.

I thought it was a good story. It was written well and narrated well. But reminded me of several other books but good nonetheless.

A great blend of old and new history

It was a great story that leads you from the past to current. It was a steady read and a pleasurable one to enjoy.

The end result of what could have been a good story, ended up as a long car/plane chase. If you enjoy endless baddies nearly getting the goodie, buy the audio book. Even the narrator, whose name appears to be Italian, pronounces Fiat as Fee Art!!! The author should also know that the star of the show, the virus, should have more info in general about viruses. By the way, no virus kills in seconds of contact. There is no tension in this so-called thriller. Bad Germans, dodgy Vatican employees, etc., but we have a beautiful heroine. Hopefully she doesn't die. I'm not listening any further to find out. Still have two hours to go but life's too short to carry on.