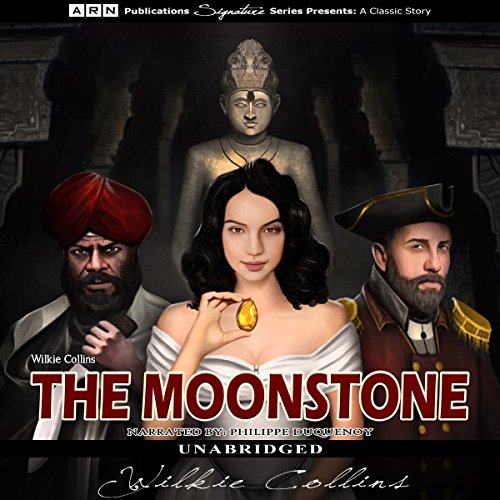 The man charged with transporting the diamond quickly suspects that something is amiss when he notices Indian men following him in London and at the Verinder estate. On the eve of her birthday, Rachel wears the diamond to dinner where she is proposed to by her cousin, but ends up refusing him, as she is in love with someone else.

That very night, the diamond is stolen once again and things begin to quickly escalate as people are accused of its theft, and those being accused begin to die. Rachel starts to act very strangely and the household is moved to London until the investigation is over.

The novel shifts between various people's point of view in an attempt to piece together the mystery of "who done it?" Bits and pieces of the story start to come to light and the plot twists and turns in unexpected ways until the mystery is finally solved.

What listeners say about The Moonstone

A Classic in Crime Fiction

This novel is, arguably, the first crime novel and inspired an entire genre, character tropes, and basic plotting elements. From the 'detective craze' to the 'innocent beauty' this novel has it all.

It is performed well and maintains interest even if the characters are a bit one dimensional and the plot lags at times.

A must read for crime fiction buffs.

Lots of Victorian Mystery and Mood

One of the first detective novels - and a very interesting look into Victorian life for a certain segment of the society at the time.

Great voice differentiation made this intricate story easy to follow. Pretty intriguing; made me want to read Robinson Crusoe ;)

The narrator was so painful to listen to.

The narrator seemed like he was in a hurry and just wanted to get it over with.