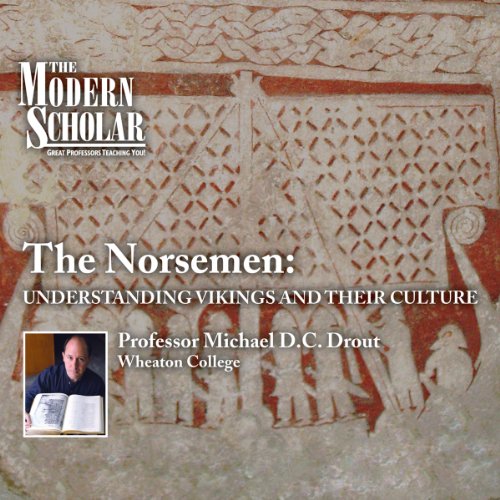 The Modern Scholar: The Norsemen - Understanding Vikings and Their Culture

The Modern Scholar: The Norsemen - Understanding Vikings and Their Culture

Professor Michael D.C. Drout of Wheaton College immerses listeners in the extraordinary legacy of Viking civilization, which developed in what is now Scandinavia during the early Middle Ages. During the course of these lectures, Professor Drout explores how these peoples conquered all of Northern Europe, traveled as far as Byzantium in the East and North America in the West, and left a literary legacy that includes numerous works studied and enjoyed to this day.

What listeners say about The Modern Scholar: The Norsemen - Understanding Vikings and Their Culture

This is the fourth course by Professor Drout I've listened to and this may be my favorite. He enthusiastically covers the history of the culture, (religion, literature, language) and the politics of the Vikings (which he explains was a word that originally meant "a man who keeps his boat tied up in the creek behind his farm") and also their importance to European history as a whole.

He touches on a wide variety of subjects. But the lectures fly by and I found myself wishing the course was longer. I was never bored and I will re-listen to it several more times. I highly recommend this course.

Vikings in a Cultural Context

What did you love best about The Modern Scholar: The Norsemen - Understanding Vikings and Their Culture?

I loved all of the connections that Drout made. I've been on a medieval northern Europe kick after listening to a series of lectures on JRR Tolkein (and HIS connection to the medieval world) by Corey Olsen (one of which included a guest lecture by Professor Drout). I just love how Drout shows the evolution of our understanding of Vikings and their culture. He does a great job of connecting literature with actual events, as well as how those ideas developed into other pieces of art. Some other posts mentioned the lack of history, but the reading the literature is HOW we come to understand the history, so I feel that I got plenty of historical context here. I look forward to listening to other lectures by Mr. Drout.

What other book might you compare The Modern Scholar: The Norsemen - Understanding Vikings and Their Culture to and why?

Exploring JRR Tolkein's The Hobbit: Tolkein, the medievalist that he was, funneled many Norse ideas into his works. Obviously, that makes a connection to this set of lectures, as far as subject matter is concerned, but I'd compare the style of the book to these lectures, as well. Both authors are enthusiastic, interesting, and complete, without being confusing.

The narrator was enthusiastic and easy-to-follow. Of course, it helps that it was also the writer of the material. I felt like I was in a class with my favorite professor. Also, it was fantastic to hear Old Norse spoken aloud.

Crash Course on Norsemen and Norsewomen

What did you love best about The Modern Scholar: The Norsemen - Understanding Vikings and Their Culture?

I have done a lot of recherche on "Nordic Culture" over the last 20 years and expected this course to "refresh" me from a different perspective. That is exactly what it did. I remembered why I got interested in those strange, funny, furious, free people. Michael Drout seems to "love" them just as well, his will to bridge the gap of time by trying to vocalize the language, his energy (though ignoring time frames and differences in geographic contexts) and the well delivered lectures (often starting with a common misconception / icon that is then revealed as a translation flaw or just poet's invention) make this course a must-have.
The course is short, much too short to even do the topic justice that Mr. Drout touches. This becomes more and more obvious when he constantly takes a short cut saying "but I won't get into this any further here" in the saga-related chapters.

Mr. Drout himself mentions that he would love to see movies being created from some of the sagas he quotes. While understanding why he feels this way, I cannot quite agree: Modern movies are based on very simple, very straight ideas and seemingly try to avoid ANY thinking on the audience's side. This approach obviously would never work with one of Mr. Drout's beloved Scandinavian sagas and he would most likely regret having mentioned his wish if he saw "Hollywood" picking up the idea :-)
That said, a tag line - provocative, sure - could be: They've been there, they've done that. All of it.

I love Mr. Drout's performances of Nordic and Germanic languages, although (being German) I did have my difficulties actually understanding some of the Germanic parts :-D

Nevertheless, by reciting (more or less original) texts Mr. Drout manages to give the listener a glimpse of the FEEL of how those people were, since your (spoken) language really tells a lot about you.
I would have wished for more details, especially on the differences between geographically separated groups of people. My own studies prepared me with some (good and bad) prejudices that I would have loved to challenge, alas there was no time.
Yes, the course does concentrate on literature - and is right in doing so, since archaeological proof is sparse. But there IS material that could be discussed. You CAN learn a lot about the life of someone if you have access to his clothing, the way he/she built houses and villages. There IS evidence that could have served the headline of this course better than written material that was created hundreds of years after the fact.
This topic is widely discussed among historians, and unfortunately Mr. Drout seems to ignore this, delivering what he considers "facts" as "reliable", even basing social critics on his personal view of (out of time frame) "constructed" literature. This was what I found disappointing, since it represents a branch of history education that does not care about facts. In other words: Written history is always faked by "victors". You don't get to hear the "other side" and, except in a very few side notes, Mr. Drout seems to ignore that "Understanding Vikings" (etc) is a more than questionable undertaking if your material is solely created by strangers, foreigners and people who did not understand (and did not WANT to understand) the social, philosophical and religious systems they were mocking about.

Drout Does it Again! Amazing!

Michael Drout is my personal favorite in the Modern Scholar series. Everything he does is fun and he usually speaks in some crazy language that makes your mouth gap in awe. If interested at all in the Vikings get it. Well worth the credit.

stories of the Norse

map to in depth with this book. it is more lectures than knowledge. ending in a lot of stories from sagas that were written down. not sure what to believe

Too Much Literature & Grammar! (of all things)

Would you be willing to try another book from Professor Michael D.C. Drout? Why or why not?

he seems intelligent and talented ...but I would prefer someone who is more into history and the meaning of the word culture...not a grammar teacher of Norse literature. (which he apparently seems to be)

Have you listened to any of uncredited’s other performances before? How does this one compare?

this is second one by same professor...the other I listened to was on the Anglo Saxons. seems similar in content to this one.. (except focusing on Anglo Saxon literature and grammar)

Do you think The Modern Scholar: The Norsemen - Understanding Vikings and Their Culture needs a follow-up book? Why or why not?

it needs to be retitled "The Norsemen: their Literature and Grammar"

it needs to be retitled "The Norsemen: their Literature and Grammar"

You don't have to be a scholar to benefit from these interesting, informative, and well presented lectures from Professor Drout.
I have listened to his one on fantasy several times and I'm sure I will return to this one again.

If you're interested in Viking history and culture, I highly recommend this book. Professor Drout does a fantastic job keeping you engaged throughout the book, and you can tell he really enjoys the content. His commentary on the ridiculousness of certain aspects of Viking literature or lore had me chuckling throughout.

Odin Would Be Proud!

I did not expect much when I first started listening to this. I expected some good information. But, I did not expect a very energetic, and entertaining lecture. This made my drive across the country very alert. The stories kept me awake, and attentive enough to listen and drive. The professor had the type of voice to make you want to hear more. I’d love to be in his class if I were a part of his course. As a matter of fact, I’d be glad to look into it, if he had an online course. Thank you, Professor Drout!

I liked it. I liked the accounts of literature and the style of the delivery

Much enjoyed, learnt a great deal

If you could sum up The Modern Scholar: The Norsemen - Understanding Vikings and Their Culture in three words, what would they be?

Gives real insight into the Viking culture dispels many myths about them, I ma very glad I got the book.