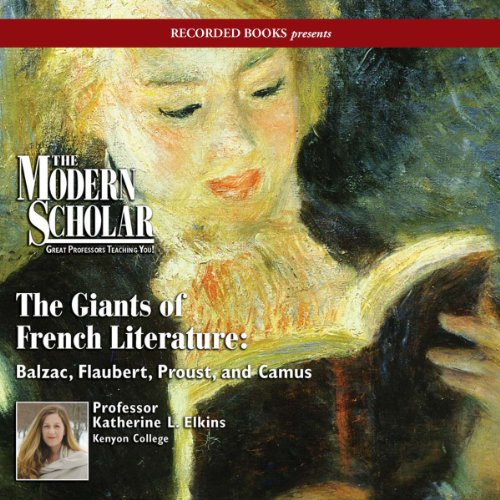 In this series of lectures, Professor Katherine Elkins details the lives and works of the premier French writers of the last two centuries. With keen insight into her subject material, Professor Elkins discusses the attributes that made classics of such works as Balzac's Human Comedy, Flaubert's Madame Bovary, Proust's In Search of Lost Time, and Camus' The Stranger. Literary immortals all, these four French authors produced works that reflected their times and exerted a continuing and lasting influence on all the generations that followed.

What listeners say about The Modern Scholar: Giants of French Literature

This Audible book entitled “The Modern Scholar: Giants of French Literature — Balzac, Flaubert, Proust and Camus” consists of several lectures by Prof. Katherine Elkins. This book, is so instructive in its scope and intellectual insight on the works (and to a lesser degree) lives of the French literary giants Honoré de Balzac, Gustave Flaubert, Marcel Proust and Albert Camus, that I was as a direct result thereof inspired to have the following books delivered to my Kindle: “The Works of Honoré de Balzac”; “The Collected Works of Gustave Flaubert” and Marcel Proust’s “In Search of Lost Time”. I’m yet to purchase Camus.

The publications Prof Elkins discusses critically are:
1. The Balzac novels: “The Wild Asses’ Skin”, “Le Père Goriot”, “Eugénie Grandet”, “Lost Illusions” and“Cousin Betty”.
2. The Flaubert novels:”Madame Bovary” and “Sentimental Education”.
3. Proust’s masterpiece, “In Search of Lost Time”; and
4. Work by Camus incuding: “The Stranger” (aso translated as : “The Outsider”); “The Myth of Sisyphus”, “The Plague”, “The Fall”, and “The First Man”

In my case, this audiobook is where my first experience of reading French literature had its genesis. I would perhaps never have read at least the modest two novels if I hadn’t listened to the lectures by Prof. Elkins. I confess that I first listened to these lectures and with this I was given prescience from which I could draw inspiration and courage to read the novels themselves. Now I’m done reading Proust’s “In Search of Lost Time” as well as Balzac’s “Le Père Goriot” (Father bGoriot”) — in that order. So I’ll deal with them in that order.

1. “In Search of Lost Time” — by Marcel Proust
I can now proudly proclaim that I’ve waded through one of the most influential, difficult and obtuse literary works ever written. Its length exceeds what would have amounted to more than 3,000 pages in hard copy. If you read this work, then you will have read approximately 10 novels in one go —estimating that an average novel spans approximately 300 pages.

I would never have come close to “getting it”. Granted, I still don’t. But I, upon first having listened to the lecture and then only reading the novel, was thereafter made alive to the “sound of the spoon on the plate” and the raising to the lips of “a spoonful of tea in which I had soaked a morsel of the [madeleine] cake”. Now I’m in the position to conclude the following with the narrator of this novel: “And suddenly the memory returns. The taste was that of the little crumb of madeleine . . . “

The novel would only have been a boring written instrument (which it unfortunately has the potential of becoming without the proper guidance this lecture offers), devoid of tastes, smells, sounds and for that matter every sensory perception. Had it not been for Prof Elkins, it would not have been possible for me to have experienced these sensory perceptions with the narrator. I might, to begin with, not even have dreamt of reading a novel exceeding 3,000 pages in length in which (as I had heard it rumoured) nothing really happens, without hardly any plot, with no real beginning or end. And seemingly, to make up for these ostensible shortcomings, hundreds of characters, most of whom are aristocrats with their debatable idiosyncrasies. And the sentences, often paragraphs and sometimes even pages long, would to me have been inexplicable drooling rants and raves of a depressed, more often than not love-sick insomniac. Now, given the assistance of Prof Elkins, they are intellectual challenges ready for me to unravel their inner workings, mysteries and meanings.

Why would anyone want to read this novel? (And let’s call it that— Prof Elkins mentions that Proust might have toyed with the idea of writing a work of literary criticism). My attempt at an answer would be that, if you’ve done reading and you afterwards wonder why you’ve done so (as in my case), then the novel has by default attained its goal, because it has sent you on a quest in search of the time lost reading it. Thereby, I hope you would embark upon a quest in search of the soul of arguably the most impenetrable of masterpieces. This would amount to nothing short of a quest in search of your own soul.

According to Prof Elkins, Balzac, in depicting the city, Paris as a character inspired Dickens to do the same for London, Dostoyevsky for St Petersburg and Joyce for Dublin. And besides, Friedrich Engels asserted that he had learned more about Paris from reading Balzac than he did from talking to his contemporaries.

“Le Père Goriot” was published in 1835 and set in 1819 in a quickly changing Paris. Balzac said that only Parisians will be able to understand his novel. He puts it thus: “Will anyone without the walls of Paris understand it? It is open to doubt”. Prof Elkins informs us that in this Paris, there was very little housing, with the result that people sought lodging in boarding houses. It is in one of such boarding houses, known in the neighbourhood as “Maison Vauquer” and kept for the past forty years by its owner, Madame Vauquer where this novel primarily plays off. This boarding house “receives men and women, old and young, and no word has ever been breathed against her respectable establishment”.

One of this motley crew of lodgers is the protagonist, Father Goriot. He is an elderly vermicelli maker who dotes on his two daughters whom he had married off to wealthy husbands and who hardly return his love in kind. In fact, they effectively ruin him financially, mentally and eventually, physically. Another lodger is Eugene de Rastignac, a young law student, worthy of mentioning owing his involvement with Father Goriot as well as both his daughters. The other lodgers don’t feature as prominently in this regard.

Prof Elkins draws our attention to the intricate interplay of relationships: father, daughters, Rastignac. The backdrop is Balzac’s description of the grim living environment of the “Maison Vauquer”, as well as Balzac’s Paris, at times also grim with muddy streets and boots and at times decadent in the artificial wealth, pomp and ceremony of its aristocrats. Prof Elkins gives us the King Lear analogy of the relationship between Father Goriot, who prematurely gives away his all to his daughters, and the daughters, who only suck their father dry and give nothing in return.

I’m yet to read the other writers also dealt with is this series of lectures, to wit Flaubert and
Camus,. So, I’ll be back.

Aimed at the intelligent reader

This works for those who have studied literature at university, and for what Virginia Woolf called "the common reader." Catherine Elkins is truly a wonderful teacher. I too would like to see lots more Modern Scholar lectures on Audible.

Informative, engaging, interesting, and insightful. Loved this lecture and would like to see many more like it.....Saccio, (Shakespeare), etc.

Speaking of Proust, this takes me back

This takes me back to my finest learning experiences in college, and I was blessed with many both in the US and overseas.

I haven't formally studied French literature in decades but from time to time I like to refresh and think back on the pleasures I discovered when first reading Balzac, Flaubert and Proust those many years ago. This was a very good course and I really appreciated the professor's perspective and insights into these authors and their novels. I thought it was very well done and only wish it were longer and discussed more French authors including some of the poets.

Enjoyed the lecture and the delivery. Was most interested in the Balzac and Flaubert chapters, not so much Proust and Camus. Would have liked Zola instead.

Most delightful introduction to four pillars of French literature in the form of the modern novel. I intend to revisit these lectures often as I read and reread these classics.

I thought the lecturer did a decent job. She made me curious about the authors. She could have done more to explain why she excluded other authors; how she narrowed it down.

An Education on its own

This was such a lovely book from start to finish, Katherine's narration was outstanding and the narrative she crafted was really interesting and educational. I feel as if I have received a great start in my quest to learn about French literature. Thank you so much Katherine Elkins.

Enjoyable introduction to these authors.

Katherine Elkins has designed this course beautifully. It is well paced and interesting. One of the best of this series that I've listened to.