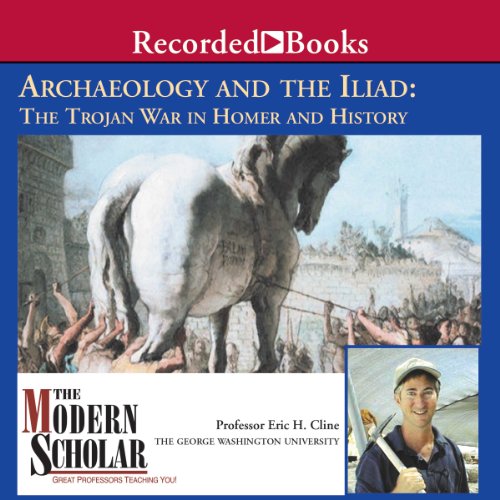 The Trojan War, captured forever in Homer's epic poem the Iliad, resonates to the present day in the popular imagination, and this magnificent confrontation continues to exert a tremendous influence on modern audiences.

But did Troy actually exist? And if so, where is it located? Was the Trojan War actually fought? If it was, did it take place over the course of ten years, as Homer wrote, or was it a much longer series of battles? And why was the war fought? Could Helen's face alone really have launched a thousand ships?

In this course, esteemed professor Eric H. Cline examines the real history of Troy and delves into the archaeological discoveries (which continue to the present day) that help to answer the questions above. Through an entertaining and incisive analysis of known data, Professor Cline provides a fuller, richer understanding of this historic clash.

This 2006 course may seem a little dated, in part because in several of the lectures Dr. Cline refers to the 2004 movie "Troy" that starred Brad Pitt as the iconic Greek hero Achilles (a movie that I, like Dr. Cline, enjoyed more than the critics did). Don’t let that turn you off. This course is a great mix of history, literature, and archeology.

Eric Cline is one of my favorites among the academics who star in the Modern Scholar and Great Courses. He has wide-ranging interests and expertise, as well as a kind of dorky sense of humor about himself. And, as an archeologist, he doesn’t just read, write, and pontificate from an ivory tower (in Dr. Cline’s case, it’s George Washington University). He has spent many seasons doing field work in the Middle East and has seen first-hand much of what he talks about.

After an introductory lecture, the first three sessions give an overview of the clashing parties--the Mycenaeans (Achaeans/Greeks), Hittites (Trojans), and the Sea Peoples--in the late Bronze Age, the time the Trojan War most likely took place (if indeed it did take place, which Cline thinks it did). The Sea Peoples are the most mysterious of these groups, and probably for that reason I found them the most interesting. (Cline’s book “1177 BC: The Year Civilization Fell Apart,” an in-depth analysis of the Sea Peoples and their role in the collapse of Bronze Age civilization, expands on many of the themes he introduces in these lectures.)

The second group of lectures turns from history to literature. Turns out that many of the plot points we associate with the Iliad--including the famous Trojan Horse--aren’t in the Iliad at all, but are part of a larger work, the Epic Cycle, that today exists only in fragments or referenced in other works (such as the tragedies of the classical Greek playwright Aeschylus). These lectures discuss the questions of who was Homer, and was there even a Homer, and (the presence of gods and goddesses aside), how accurate is the Iliad? Does it in fact depict the late Bronze Age of the Trojan War, or the early Iron Age of Homer? There is also a lecture on ancient Hittite writings that may (or may not) shed light on the “real” Trojan War. All in all, a unique perspective that draws on all of Cline’s fields of interest.

The largest group of lectures covers the discovery and excavation of what is now generally accepted as the remains of the ancient city (or cities, as you’ll learn) of Troy. Once dismissed as myth, today there is more archeological evidence for the existence of Troy and the Trojan War than there is for the Exodus of the Hebrews from Egypt (Professor Cline, also an expert in biblical archaeology, has a different course that covers that).

I highly recommend these lectures as a starting point for anyone interested in the history of ancient Greece. There are a number of YouTube videos of talks by Professor Cline, if you want to check out his style for yourself.

I can see the windy plains of Troy

This was a thoroughly enjoyable series of lectures on Bronze Age Greece. If you find yourself interested in this period of history you'll find this absolutely fascinating. I loved this book and would buy again.

There's a lot of information here, and I enjoyed the enthusiasm of Professor Cline. Unfortunately, there's also a lot of repetition.

This is much more archaeology than Iliad. I learned a great deal about the various archaeologists who have sought Troy over the years. One, in particular, was evidently a scoundrel and a liar - his story is fascinating. And what a to-do over "Priam's Treasure"!

I just think it was a little long and (to repeat myself!) very, very repetitive. If you have a real interest in archaeology, then by all means go for it. If your interest is more literary, perhaps another history of Homer and the Iliad would be more appropriate.

Interesting Course If the Topic Appeals

This course was helpful to me in understanding the archaeology about Troy and its implications for the historicity of The Trojan War. If you don't care to hear about Troy level 9B and why it may be less important than level 9C, you might get bogged down a bit.

What did you love best about The Modern Scholar?

The lecture series was broken down into sections relating to the possibilities surrounding whether the Trojan War actually happened, potential locations, archaeological evidence uncovered to date by various excavations since the 19th century and the various theories of how and when Troy was likely destroyed.

It gave me some new insights to the story and how the story may have evolved from the accepted 1150 BCE occurrence of the war and Homer's rendition told 500 years later, the concept that the famous Trojan Horse may not be what we think but instead a metaphor and the proposition that maybe the war wasn't because of Helen afterall.

If you want more in depth discussion about the story itself - this is not for you. However, if you are interested in archaeology or the evidence that indicates the possible remains of Troy then this lecture series is spot on. Enjoy!

Cline covers a lot of ground, not only the history of the Iliad but also the questions surrounding Homer, the histories of the archeologists and archeological digs that have searched for Troy, and the questions that archeology and study have yet to answer.

Cline is a pleasant, interesting lecturer that makes the subject matter both intriguing and accessible to the listener.

I would recommend these lectures to anyone who has an interest in Homer's story of Troy "The Iliad", an interest in ancient Greek history, or in archaeology.

Dr. Cline's in-depth knowledge of all these complex subjects is obvious; yet he has a real talent for communicating with the general listener and making the subject matter easily understandable and ... fascinating.

Goes over a lot of material, but never gets tedious. He's also fair with the differing views on the matter.

A good history class about the Illiad

Yes, if they loved ancient history like I do. This lecture series is good.

What other book might you compare The Modern Scholar to and why?

None. Only real lectures I have sat through.

The narrator tried to be funny, but wasn't.

No. It was fun to listen per each lecture with a break in between to digest the info.

A really good series. Check it out.

Cline not only gives an excellent overview, he provides a good example of how to think as a social scientist.

This covers much the same ground as the Michael Wood tv series. The lectures are very informative and provide a lot of detail. The host professor cline is a good host. If you liked the above TVs series, this is an excellent addition to your library.