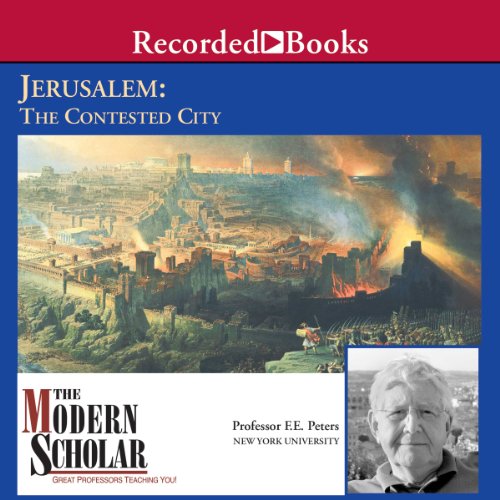 Located in the heart of Israel, Jerusalem is the center for the spiritual world's three largest religions. Throughout its millennia-old history, Jerusalem has been known by many names: Salem, Zion, Hierosolymae, Al-Quds and others, and no city has ever been in more dispute.

In scripture, the city's history began nearly 4,000 years ago, when Abraham met Melchizedek, King of Salem. Its significance as a "holy land" is evident by the number of religions that call it their spiritual home. Jews, Christians, and Muslims have struggled for its possession. In the 26 times a new group took over leadership of the city, the "City of Peace" has seen very little of its namesake, even through modern times, and 35 times it was at least partially destroyed.

In light of the volatile nature of the Middle East, and today's ongoing conflicts, it is important that we understand why Jews, Christians, and Muslims all lay claim to Jerusalem. Through an in-depth study of the various holy sites in Jerusalem, you'll begin to see which are considered sacred and to whom. And through an investigation of Mark Twain's The Innocents Abroad, you will see the many different perspectives of pilgrims in days of long ago, and even today.

filled in every gap. looking forward to relistening. He knows exactly how Protestants feel abt that so called decor on COTHS. that was funny

The flow of wisdom here is divine. Very grateful to have both of Frank Peter's works. I wish there were more. Please consider publishing more.

Superb delivery. No ideological agenda. CONDENSED -- unlike many of these offerings, which go on for too long.

Probably my best listen to date!

This is an exemplary lecture series presented by Prof Peters. He is probably my favourite lecturer of the Modern Scholar series and this is probably my favourite of his works so far. Before listening to this I would say I only had a modest amount of knowledge about the history of Jerusalem and the extent of its significance to Muslim, Christians, Jews and its relationship to the Greeks, Romans, North Africans, Ottomans and the Crusades. After listening to this I would consider myself well informed on all these issues and a lot more!
One of the reasons I enjoyed listening to this so much is that Prof. Peters narrates his the lectures in a way that allows you to follow the subject with ease. Again, I was always reluctant to press pause and would probably have listened in one sitting had work not gotten in the way- the whole subject is so very interesting and presented very well! I would recommend this to anyone browsing and will probably be listening to this more than once!