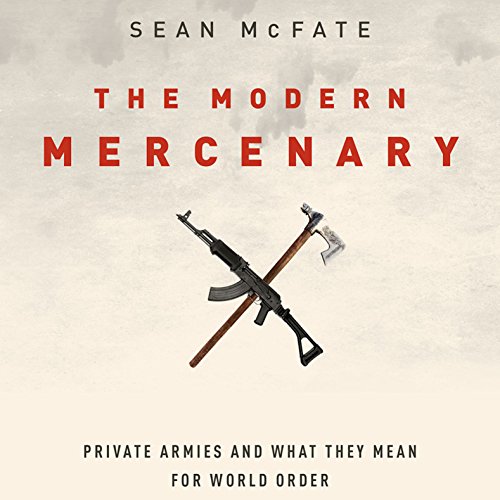 It was 2004, and Sean McFate had a mission in Burundi: to keep the president alive and prevent the country from spiraling into genocide without anyone knowing that the United States was involved. The United States was, of course, involved, but only through McFate's employer, the military contractor DynCorp International. Throughout the world similar scenarios are playing out daily. The United States can no longer go to war without contractors. Yet we don't know much about the industry's structure, its operations, or where it's heading. Typically led by ex-military men, contractor firms are by their very nature secretive. Even the U.S. government - the entity that actually pays them - knows relatively little. In The Modern Mercenary, Sean McFate lays bare this opaque world, explaining the economic structure of the industry and showing in detail how firms operate on the ground. A former US Army paratrooper and private military contractor, McFate provides an unparalleled perspective into the nuts and bolts of the industry as well as a sobering prognosis for the future of war. While at present the US government and US firms dominate the market, private military companies are emerging from other countries, and warlords and militias have restyled themselves as private security companies in places like Afghanistan and Somalia. To understand how the proliferation of private forces may influence international relations, McFate looks back to the European Middle Ages, when mercenaries were common and contract warfare the norm. He concludes that international relations in the twenty-first century may have more in common with the twelfth century than the twentieth. This "back to the future" situation, which he calls "neomedievalism," is not necessarily a negative condition, but it will produce a global system that contains rather than solves problems. The Modern Mercenary is the first work that combines a broad-ranging theory of the phenomenon with an insider's understanding of what the world of the private military industry is actually like.

What listeners say about The Modern Mercenary

More of a political treatise than insight ...

The focus of the book was non on PMC but more a treatise on the current dichotomy between globalization and decline of the Westphalian Order.

It was a good review of the shifts between state sovereignty and the political trends that are changing political realities.

I don't believe you could make a movie out of this book....

As a student of history and war this book was an invaluable contribution. I plan on ordering a hard copy for my own personal notes. The case studies of Liberia and Somalia are real gold.

Reads like a masters thesis, but much smoother. Author definitely took a fair minded approach to the research and made solid points for the UN to examine using PMCs for humanitarian endeavors. A good intro to anyone looking to understand the modern private military. The narrator performed well and I found increasing the speed to 1.3x helped move the book along quicker with still sounding normal.