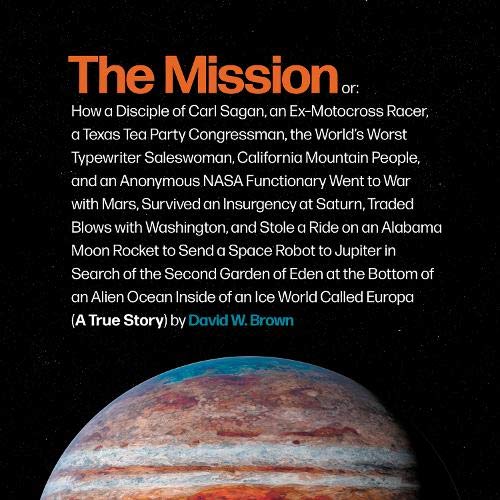 A masterful, genre-defying narrative of the most ambitious science project ever conceived: NASA’s deep-space mission to Europa - the Jovian moon where might swim the first known alien life in our solar system - powered by a motley team of obsessives and eccentrics.

When scientists discovered the first ocean beyond Earth, they had two big questions: “Is it habitable?” and “How do we get there?” To answer the first, they had to answer the second, and so began a vivacious team’s 20-year odyssey to mount a mission to Europa, the ocean moon of Jupiter.

Standing in their way: NASA, fanatically consumed with landing robots on Mars; the White House, which never saw a science budget it couldn’t cut; Congress, fixated on going to the moon or Mars - anywhere, really, to give astronauts something to do; rivals in academia, who wanted instead to go to Saturn; and even Jupiter itself, which guards Europa in a pulsing, rippling, radiation belt - a halo of death whose conditions are like those that follow a detonated thermonuclear bomb.

The Mission, or: How a Disciple of Carl Sagan, an Ex-Motocross Racer, a Texas Tea Party Congressman, the World's Worst Typewriter Saleswoman, California Mountain People, and an Anonymous NASA Functionary Went to War with Mars, Survived an Insurgency at Saturn, Traded Blows with Washington, and Stole a Ride on an Alabama Moon Rocket to Send a Space Robot to Jupiter in Search of the Second Garden of Eden at the Bottom of an Alien Ocean Inside of an Ice World Called Europa (A True Story) is the Homeric, never-before-told story of modern space exploration, and a magnificent portrait of the inner lives of scientists who study the solar system’s mysterious outer planets. David W. Brown chronicles the remarkable saga of how Europa was won, and what it takes to get things done - down here, and up there.

Crafted with verve, humor, and uncanny empathy, The Mission is an exuberant masterclass in how a few determined cogs can change an entire machine.

What listeners say about The Mission

I could not turn it off

Disclaimer: I know several of the people and institutions covered in this performance. This is my new favorite story of Big Science (in this case, planetary astronomy) and how it gets done. Listeners learn just enough science to inform them why the work is exciting to its practitioners and important too. Those practitioners become real people through a series of mini-biographies constructed through interviews. As for the organizational and interpersonal intrigues and battles, the author covers them with a diplomatic flair I wished I possessed. The only disappointment is that the story ends at the start of the Europa Clipper mission. One wants to know how it will turn out.....

I really enjoyed this book. The author goes into quite a bit of detail behind the politics and various players involved in the Europa Clipper mission.

The narration is excellent as well and you can tell the passion this author has about the topic. This makes me want to follow the latest advancements in this mission and I will definitely be following for more developments!

How a gossipy tabloid writer reduces two of the most respected space organizations in the world to looking like bratty, backbiting kindergarteners who wax poetic about nothing important while they achieve something amazing.

Surely someone that knows anything about science in general and astroscience in particular would have been more appropriate to write the Europa Mission. Instead we are regaled with 3 generations of parentage, the decor of the Marriott hotel, artwork in meeting rooms and the double honk of a taxi drivers in SF. There us a story here, but Mr. Brown is more interested internal dialogue and pointless navel gazing about decor and dietary choices.

Science always has been done at the behest of its patrons, from Copernicus to the present. NASA and JPL's patrons are the US citizens. Instead of telling a story that would make us proud of the herculean endeavors of scientists and engineers, we are forced to read escrutiating detail about next to nothing by someone who should be writing gossip columns for the Daily Mail.

Loved the science, but it was a little heavy on the bureaucracy. Really liked the narration and occasional wit.

In the room where it happens

Every space enthusiast, and everyone who wants to make something big happen should read this book. This book does a masterful job of addressing all the forces that determine outcomes: the politics, the economics, the technical capabilities, and social trends.

Way too many biographies , too much politics, not enough science.