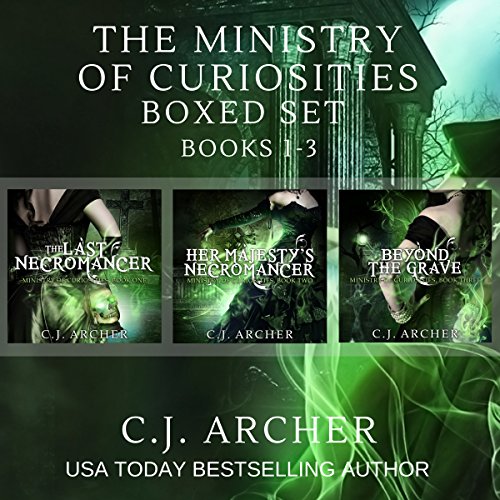 The Ministry of Curiosities Boxed Set

The Ministry of Curiosities Boxed Set

This boxed set contains the first three books in C. J. Archer's popular Ministry of Curiosities series. Titles in the set include:

Description of The Last Necromancer:

For five years, Charlotte (Charlie) Holloway has lived as a boy in the slums. But when one theft too many gets her arrested, her only means of escape lies with a dead man. Charlie hasn't raised a spirit since she first discovered she could do so five years ago. That time, her father banished her. This time, she brings even more trouble upon herself.

People are now hunting Charlie all over London, but only one man succeeds in capturing her.

Lincoln Fitzroy is the mysterious head of a secret organization on the trail of a madman who needs a necromancer to control his newly made creatures. There was only one known necromancer in the world - Charlotte - but now there appears to be two. Lincoln captures the willful Charlie in the hopes the boy will lead him to Charlotte. But what happens when he discovers the boy is in fact the young woman he's been searching for all along? And will she agree to work for the man who held her against her will, and for an organization she doesn't trust?

Because Lincoln and his ministry might be just as dangerous as the madman they're hunting.

Just the kind of series I love to listen to!!

OK, so I've listened through book nine & am eagerly awaiting book ten. 'The Ministry of Curiosities' is an organization that monitors and tries to manage to keep secret the paranormals in the world. It's a warm & wonderful world that the author has created. The characters (for the most part) are likable & well developed. Each book has a new murder or mystery to solve and they don't feel redundant to me.
The series is through the eyes of the heroine who is strong willed, kind, courageous & in love with the hero. The romance is slow with a really good angsty part. (I happen to love me some angst) Her paranormal gift is that she's a necromancer. Meaning, that she can call back the dead & control them. This is a very rare gift that she uses to either find out who murdered them or gets them in their bodies to help her save herself or others.

Other series that I've enjoyed are: Mercy Thompson and Alpha & Omega by Patricia Briggs; Night Huntress and Night Prince by Jeaniene Frost; The Phoenix Pack by Suzanne Wright;

I’m hooked, to my surprise!

I would recommend this boxed set because it is a great launch into the rest of Charlie and Lincoln’s story at a great price for three whole books.

What other book might you compare The Ministry of Curiosities Boxed Set to and why?

This is a period supernatural fantasy set during a favorite period of English history and it combines suspense, romance and mystery with engaging characters as do the books of Laurie R. King, Elizabeth Peters and Deanna Rayburn among others.

Ms. Arserio has a very pleasant voice, easy to listen to, and her English accents are believable. However I don’t feel she is as skilled at other nationalities and her range isn’t broad enough for the range of men’s voices as I would like.

Perhaps if I were younger or if I hadn’t listened to all three books one after the other, I wouldn’t have grown impatient with Charlie and Lincoln’s drama. I had to remind myself repeatedly that Charlie is very young and both characters have been emotionally handicapped by their unconventional childhoods. It also helped to remember that all three books occur over the course of only a few months. I was sympathetic but I got tired of Charlie describing herself as “pathetic” and of Lincoln’s confused stubbornness. Still, I’m hooked and want to see these two continue to grow in their selves and their relationship.

I've been a member of Audible for years and I've never written a review--until now. While waiting for the third-installment of the Dark Days Club (an excellent series), I thought this "boxed set" would be a good deal and good listen. I was wrong. I listened to the first two books of the series, hoping the characters would become more interesting or the story would become more exciting. I can go no further. The main characters are not likable. At all. And any story about necromancy is an aside. Nearly the entire story is about our "heroine" chasing after the brooding, runs hot-and-cold bad boy. Ugh. The dialogue between the two is cringeworthy. Really. It's intolerable. The more I listened, the more I disliked both characters. Please do yourself a favor and spend your credit on something else.

I enjoyed the first book, was a bit less enthusiastic during the second novel and by the start of the third feeling frustrated with the repetitious nature of the storyline. Once I got over halfway through the third book, I was feeling a bit better about the story which finally advanced a bit.

On the whole, there is too much of the main protagonist brushing aside warnings and having to be rescued, over and over. I did like the lead characters but would have liked to know a bit more about the supporting characters.

I am happy enough that I read the first three in this series but I don't believe I'll venture volume four or beyond. There are better stories to read.

I was excited when I found this series because I enjoy Victorian/steampunk but have decided to stop listening. I believe I stopped somewhere in the middle of Book 2. The only thing that got me that far was the narrator did a good job with the characters but the overall story seemed to get slower as I listened. The main character started to irritate me as she did not progress to a stronger female character after events started to unfold. Maybe the story was just too slow for me.

Good story, interesting characters. Performance was good, the narrator does a good job with the voices and accents.

I am really loving this series, and the three book collection is absolutely worth your audible credit. The narration is wonderful, the characters are fully lovable (especially Seth, Gus & Cook), and the mysteries are engaging. It’s not very often that dead people coming back to life is less than terrifying to me, and this series almost makes it a little endearing. Highly recommend!

Wish I could "reclaim my time"

This series is little more than a bodice ripper pretending to be a sci-fi/fantasy fiction thriller. Another reviewer, Book Wyrm (whose review I wished I'd read before buying this book), accurately sums up the series with this sentence: "The stories are actually little more than an angsty YA romance."

That said, why do female SFFF writer feel the need to turn their books into quasi-romance novels? Why must almost every female SFFF character spend half her time worrying about whether some guy likes her?

To the narrator's credit, she does a good job of infusing personality into her characters. So much so, that I actually spent 18hrs of my life listening to Charlie obsess about Lincoln like a petulent, love sick teen, until her woman-child antics became too unbearable and I just decided to delete the book.

thought it would never end!

boring, shallow repeatedly went over the same thing. I kept hoping something would actually happen but no.

Too much formula romance

There is a good story in this three volume set. If you took out all of the excess sexual obsession it might have been worthwhile. there was never a good ending and the lack of emotional growth made sure I will not continue reDing the series.

I like the premise of the stories, but the never-ending stuff about the ambiguous relationship between Charlie and Lincoln just got tedious and greatly detracted from the interesting stuff.
The narration didn't really help.
Having listened to the box set of the first three stories I have no desire to listen to any more.

Some good ideas in a poor framework

The performance was good but the story was very weak. The occasional original idea but the same scenario is repeated again and again.
The Perils of Pauline meets Charles Dickens.
Disappointing because the heroine and a couple of the other characters could have developed into interesting people.

This set out to be such a great trilogy but our heroin lacks the ability to grow a pair of t*ts! The emotions I acquired where to slap the enrol the stupid girl in remedial school. The story is shot down by the imatured ramblings of our heroin. ok she is a young girl...but one who lived on the streets as a boy. Suddenly she puts on a dress and becomes irresponsible air head.
let's hope she grows up in the next book!!!!

Predictable I found it boring and dragged out, the reader did not breathe life into the characters as other readers do.

The narrator really brought this to life, No pun intended. Brilliant story, occasionally edge of the seat stuff. Really enjoyed all three books can't wait to hear number four. All the characters are excellently portrayed and the narrator's voice is very pleasing. Highly recommended.

The first book is good but then it just goes downhill from there.
Really disappointed with it.

I had great hopes for this set of three novels, just up my street from the précis, but failed to deliver. Very little story surrounded by fluff and conversations irrelevant and at times cringeworthy.