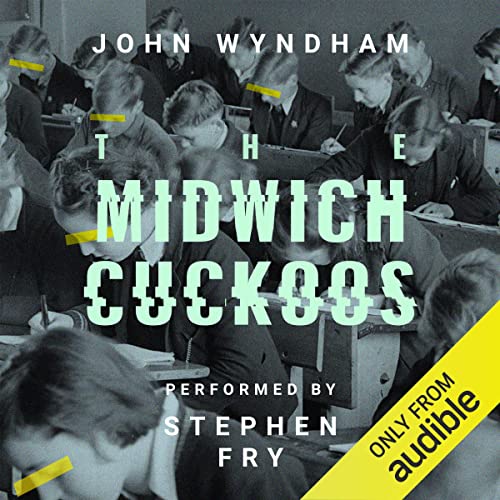 In the sleepy English village of Midwich, a mysterious silver object appears and all the inhabitants fall unconscious. A day later the object is gone and everyone awakens unharmed - except that all the women in the village are discovered to be pregnant.

The resultant children of Midwich do not belong to their parents: all are blonde, all are golden eyed. They grow up too fast, and their minds exhibit frightening abilities that give them control over others and brings them into conflict with the villagers just as a chilling realisation dawns on the world outside....

The Midwich Cuckoos is the classic tale of aliens in our midst, exploring how we respond when confronted by those who are innately superior to us in every conceivable way.

About the author: John Wyndham Parkes Lucas Benyon Harris was born in 1903, the son of a barrister. He tried a number of careers, including farming, law, commercial art and advertising, and started writing short stories, intended for sale, in 1925. From 1930 to 1939 he wrote stories of various kinds under different names, almost exclusively for American publications, while also writing detective novels. During the war he was in the Civil Service and then the Army. In 1946 he went back to writing stories for publication in the USA and decided to try a modified form of science fiction, a form he called 'logical fantasy'.

What listeners say about The Midwich Cuckoos

Stephen Fry was exactly the right choice to narrate this story. No one better to embody the fundamental decency and the waffling wordiness of the 1950s, for which you might as well read the 1930s which the English dreamed of returning to after the war. So Wyndham wraps a thoroughly modern tale in the unbearable country coziness of his time. If you can put up with the style the story still stands up.

The moral dilemmas raised by the Midwich Cuckoos are as relevant today as when the novel was written and the struggle to decide whether the end justifies the means is as great.

Enjoyed this story, Had a feeling it was something I knew as the early part seemed familiar but as it progressed I realised I had never completed the story. Steven Fry is a great narrator

Stephen Fry is one of the best narrators in the world and in less talented hands this classic would have sounded dated and uninspiring. Thank you Audible for giving it life

Hard to conceive of a way this story could be made better though this is achieved by having it narrated by Stephen Fry!

Pleasantly surprised by all the moral/ethnical conundrums around this subject. What will we do in similar situations?

Wordy and over acted

Very wordy and the narrative over exaggerated. Expected more from Stephen Fry. Very disappointing and hard to listen to.

Compared with other narrators I found Stephen Fry too pompous and boring. I preferred the narrator of the Lichen story

Not really my cup of tea

Set in years past a town is virtually held to ransom by children born to towns women but impregnated by no one knows. A strange story but I listened to the end to find out what happened
Inimitably narrated by Stephen Fry.

Stephen Fry is totally over the top

I really struggled listening to this book. Stephen Fry was awful. He managed to turn a John Wyndham classic into an Olde English farce. He needs putting back in his box and Audible should find one of many excellent actors we have in this country to re-read this book.

I'm sorry Audible but this one is certainly not up to the standard I have come to expect!

Much better than the film

I loved the narration by Stephen Fry. I was hooked from the first sentence. Always adored the writer

Having only listened to John Wyndham stories as radio dramas, I was eager to try a full book, and this was even better than I expected. I don't always enjoy Stephen Fry's narration, but I felt it was well suited to this book, and didn't find it over the top. The story addresses an interesting idea, that is only minimally affected by the passage of time since it was written, and I enjoyed the presentation of various differing viewpoints in the story. It held my interest throughout, and I was sorry when it had ended.

The Midwich Cuckoos is one of the great classic works of science fiction, the template for so many other films and novels, and it is no less compelling in this engaging new reading by Stephen Fry. A tale of love and fear, exploring at the same time what these qualities actually mean on an individual and communal level, but above all, it's a great, atmospheric fantasy.

I’m no feminist but I found the lack of female leads in the book rather shocking! After all it’s the women who are pregnant and give birth to the children, however they are not consulted and very often referred to as hysterical!! It’s a book of that time and in a way it shows how much we have all evolved in equality. The use of the term “presently” is rather annoying but you do find that style of writing in older books.

I first read the book when I was 14, and remember recommending it to my friends. I'm now 75 and I will again recommend it to my friends. it has not dated very much. The science fiction concept of this type of alien infiltration still holds plausibility . The writing is immediate and held this reader's interest. Very well narrated by Stephen Fry.

An excellent reading of a classic

After I downloaded this book I realised it was being read by Stephen Fry I was delighted. A classic science fiction story and the reading by Mr Fry was as good as he always is.
Another excellent audible book .

Beautifully narrated and a great story

It's not often I find a story written in the 50s so easy to read. A great story that really makes you think about the way women are treated as vessels for baby making, age what it is to be human. It was beautifully narrated by Stephen Fry, which always helps.

This is a brilliant story by John Wyndham superbly narrated by Stephen Fry the emotion he puts into the characters is a joy.

Stephen fry is a good narrator, story is ok but for modern readers it's very slow