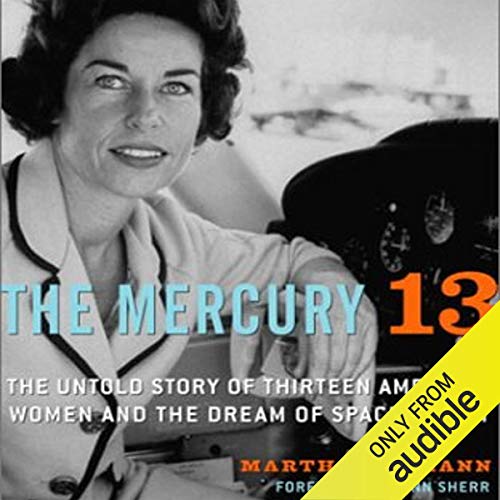 For fans of The Astronaut Wives Club, The Mercury 13 reveals the little-known true story of the remarkable women who trained for NASA space flight.

In 1961, just as NASA launched its first man into space, a group of women underwent secret testing in the hopes of becoming America’s first female astronauts. They passed the same battery of tests at the legendary Lovelace Foundation as did the Mercury 7 astronauts, but they were summarily dismissed by the boys’ club at NASA and on Capitol Hill. The USSR sent its first woman into space in 1963; the United States did not follow suit for another 20 years.

For the first time, Martha Ackmann tells the story of the dramatic events surrounding these 13 remarkable women, all crackerjack pilots and patriots who sometimes sacrificed jobs and marriages for a chance to participate in America’s space race against the Soviet Union. In addition to talking extensively to these women, Ackmann interviewed Chuck Yeager, John Glenn, Scott Carpenter, and others at NASA and in the White House with firsthand knowledge of the program. Despite the crushing disappointment of watching their dreams being derailed, the Mercury 13 went on to extraordinary achievement in their lives: Jerrie Cobb, who began flying when she was so small she had to sit on pillows to see out of the cockpit, dedicated her life to flying solo missions to the Amazon rain forest; Wally Funk, who talked her way into the Lovelace trials, went on to become one of the first female FAA investigators; Janey Hart, mother of eight and, at age 40, the oldest astronaut candidate, had the political savvy to steer the women through congressional hearings and later helped found the National Organization for Women. A provocative tribute to these extraordinary women, The Mercury 13 is an unforgettable story of determination, resilience, and inextinguishable hope.

What listeners say about The Mercury 13

Before I listened to this audiobook I never knew of the Mercury 13. At first I thought it was a book about the wives of the Mercury 7 astronauts. I quickly realized that it was something completely different, but I was intrigued and kept on listening. So glad I did. I've always been fascinated with space, and the space program and I can't believe I did not know about any of this. What an inspiring story about these women who not only wanted to be astronauts but what it meant in the evolution of women being treated as equals to men. We have come a long way in this country and a lot of that change had to do with these women and their struggles and commitment to try to achieve a goal that was only meant for a select group of men. in their own right they were pioneers of a different class. If you have an interest in the whole space program and the history of it, don't deny yourself a great experience with this book. Highly recommended.

What started out a bit confused and unfocused turned in to a wonderful tale. I hadn't known about the Women in Space program, although having read the Feminine Mystique, it's quite understandable to see where the program ended up, in the short term at least. There are quite a few interesting figures in the book, so it takes a while to settle in and get to know them. This book has me want to meet some of these women, I wonder how they look at the change over all these years.

Well told. A shame we didn't have more foresight. In hindsight, I think it set America's space program back many years.

Fantastic book, amazing women! I highly recommend this book to all. Not going to lie, at some points you will be so frustrated you'll want to yell and rant (I did to my coworkers) but it's important to see the struggle women have been through in general but space in particular, and the struggle women still face to this day. Great narrator too.

inspiring story of women who were determined and ignored for the most part. Very interesting and uncoveted a lot of little known history..A must for anyone who has any interest in womens rights or aviation! The narrator was engaging and the story compelling. it made driving long distances fly, but it made me reluctant to get out of the car on arrival!!!