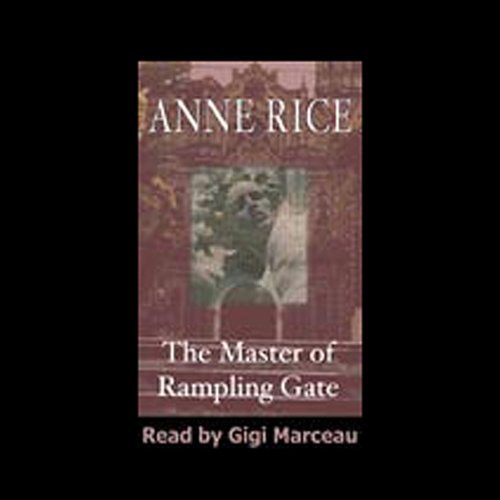 The Master of Rampling Gate

"I should have done it Richard, but I was born in that house, as my father was, and his father before him. You must do it now, Richard. It has no claim on you. Tear it down."

Anne Rice lures us once again into the seductive world of vampires with her short story, The Master of Rampling Gate. Set in 1888, Richard and Julie are the sole heirs to Rampling Gate, the beautiful but foreboding 400-year-old family mansion. Despite the dying wish of their father to destroy the property, the siblings visit the ancient home and are immediately enchanted by it. What was the "unspeakable horror" their father saw in the luxurious home they are so drawn to? Slowly memories return to Julie of a handsome, pale-faced stranger, glimpsed only briefly when she was young. The memories soon become a reality when Julie discovers the mystery behind the house, and learns who the master of Rampling Gate truly is.

The Master of Rampling Gate was originally published in Redbook magazine in 1984.

What listeners say about The Master of Rampling Gate

This was another great story about the Mayfair witches by Ann Rice. In the 45 minutes Ann has you she takes you to another level, as usually she does. Being the fact that the story is ONLY 45 minutes leaves alot to be said. I myself, and as i see others wish this was a longer story. Wishing doesn't get you much now does it though? So if you are thinking aboou purchasing this book, just go for it, it is a great listen, quick, and the usual for Ann Rice. You will not be dissapointed.

This is a wonderful short story and it is beautifully read! Great job. Thank you Anne.

Good story, not as scary as I was hoping!

I think I was looking for a little more passion in the way it was read! I was also hoping to feel more fear.

Overall the story was very good and I was happy with the way it ended. Even though it was a short story, it was very complete!

Short and sweet and a quick time filler. as always a quality read I enjoyed

This story does not have the depth of Anne Rice's epic tales. It is a sweet and lightly mysterious love story. While it feels like a departure from her other tales, she still uses deeply romatic descriptions, and of course, the supernatural.

Not bad but not good

Would you try another book from Anne Rice and/or Gigi Marceau?

I love Anne Rice books. I've read almost all of her works. As a fan, I will continue to read/listen to her newer books.

What could Anne Rice have done to make this a more enjoyable book for you?

I found the characters were lost a bit in the descriptions of the house and locations. I usually love the details of the settings but this book felt uneven.

Have you listened to any of Gigi Marceau’s other performances before? How does this one compare?

This is the 1st book I've listened to with Gigi performing. I thought she did a fine job.

Do you think The Master of Rampling Gate needs a follow-up book? Why or why not?

Not really- I did not build a relationship with the characters in the same way I have with Anne Rice's other books.

Loved it as much as when I read it the first time!

This is the first story I ever read by Anne Rice. It was the one that got me hooked onto her writing style. I enjoyed this short story so much that after reading it in a magazine, I went out and purchased every book she had about vampires at the bookstore (which was only 3 at the time). This story is short but very well written. The characters come alive with the narrating. I only wished that the story was longer. I had hoped at one time that she would take this story and revise it into a novel, but so far she hasn't. I have to say after listening to this story, I was very please with the performance. The way she told the story I could almost picture myself there in middle of it all. I enjoy stories where I can get lost in the way its narrated.

nice short story, worth the listen

this is a well done short story that i have listened to a couple of times. seems to have meaning to it beyond that of the story at face value.

Anne, you're more creative than this...

I think this story was better told with the original Bram Stoker's Dracula. Without much preamble, the vampire naturally falls in love with dinner, and does what all of her vampires do when they fall in love with a human. It had none of the originality of her vampire chronicles. A colorful short story, but lacking in substance. You're better off to re-read, or re-listen to one of her older books.