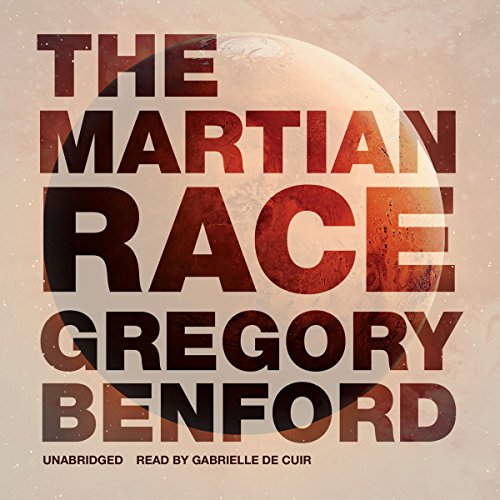 From the Nebula Award-winning author of Timescape and Foundation's Fear comes a hard-science thriller about the race to Mars.

When an explosion of the rocket launching the Mars Transit Vehicle kills four crewmen, the US decides to redirect its energies to near-Earth projects, killing the manned mission to Mars. But tycoon John Axelrod assembles a consortium to fund the project, and he expects to net billions. But a European-Asian airbus will make a similar expedition. Now, the race is on to get to the Red Planet first.

What listeners say about The Martian Race

For me, this book had it all: science, adventure, & a fast pace full of believable characters & situations. I enjoyed it.

Pack your woolies when you go on this voyage.

Would you consider the audio edition of The Martian Race to be better than the print version?

Did not read print version, but this is a wonderful audio book notwithstanding.

What other book might you compare The Martian Race to and why?

Many of the Ben Bova Mars series, and, ( of course ) The Martian. The depictions of our nearest planetary neighbour are ( so far as I can tell ) accurate, stark and the drama of Martian life is compelling and emotionally attractive.

What about Gabrielle de Cuir’s performance did you like?

Once again, one of the bevy of up and coming female performers that Audible have attracted that take what what otherwise might be considered male territory and making it their own. Her depiction of many of the intimate relationships in this story would likely not be nearly as well portrayed by a male. Compelling.

This offering is an excellent companion to the entire spectrum of audio offerings based on life on Mars. Well written and performed. Highly recommended.

What was one of the most memorable moments of The Martian Race?

When they explore the caves and discover, well, what they discover!

Really enjoyed the scenes between the lead couple. Snappy dialogue between the Ausiie and the Russian (Accents done nicely and their contrasting ppersonalities were great)

The Journey to Space Continues ... a Private Enterprise.

Narrator is very good. Some of the sections are a bit repetitive, but author does a great job of making complicated space talk accessible; and his characers are fun. I think if you like Ben Bova type space-opera, you'd enjoy this.

Enjoyed a lot except for a couple of quibbles

I enjoyed this effort by Benford and thought he did a great job with the characters and plot. My only quibbles have to do with the performance. Ms. de Cuir's rather piercing voice for Julia grated on me after a while, and her pronunciation of NASA as NA-saw stopped me dead every time.

It was a good story, I like this kind of science fiction. Not to far out from where we are now so you could see yourself in the story. Wasn't to many surprises but I wasn't crazy about the Martian life storyline.

Dragged a bit - but was still interesting

It's hard not to compare this with "The Martian" which was one of the best new SF stories I've read in years, and extremely well read as an audio book. Benford's book is probably both far more rooted in the realistic problems of Martian environment and also far more optimistic and speculative about the possibility for any existing Martian biosphere. This story has a much more human angle and I think some of that human drama was far to simplified and even cynical (the details about the corporate and government workings, in particular). The story was still interesting, the concepts were good, and I was entertained.