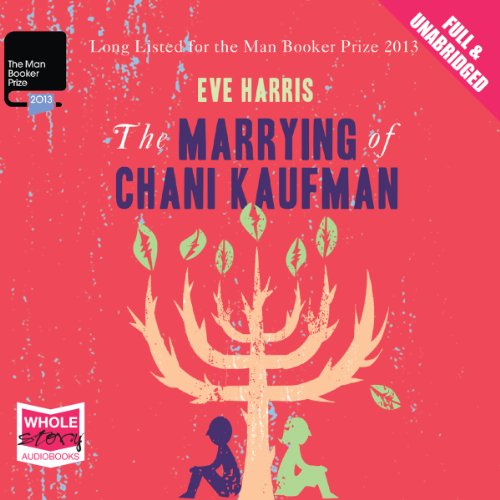 The Marrying of Chani Kaufman

Nineteen-year-old Chani lives in the ultra-orthodox Jewish community of North West London. She has never had physical contact with a man, but is bound to marry a stranger. The rabbi's wife teaches her what it means to be a Jewish wife, but Rivka has her own questions to answer. Soon buried secrets, fear, and sexual desire bubble to the surface; not to mention what happens on the wedding night….

Eve Harris taught for 12 years at inner-city comprehensives and independent schools in London and also in Tel Aviv, after moving to Israel in 1999.

Longlisted for the Man Booker Prize 2013

What listeners say about The Marrying of Chani Kaufman

Beautiful book about family and community

Loved it. It's so common to read horrible stories about Orthodox Jewish communities, and I know they have their problems. But this book also shows you the advantages of living in a tightly knit supportive community. There is hope in the young couple who promise to find a safe balance between conformity and individuality.

It was a predictable story, but easy to listen to. Some of the references made me laugh but others made me cringe. Some were wholly inaccurate!

She pronounced so many Hebrew words wrong!!!!!!!! Surely this should have been researched first!?!??!?

I’m so excited to listen to more about these charming characters!

Honestly, I didn’t want this to end! I felt so comfortable with Chani and so wanted to join them on their next stages in their lives! I thought the narration was great a d I thoroughly enjoyed the characterisation. Such a beautifully written story.

Enjoyed this book and glad I got it on audio as lots of names etc. I wouldn't have been able to pronounce correctly! Really interesting to learn about the lives of orthodox Jews and a story that made me laugh out loud in places... not so appropriate on a cross trainer in a busy gym!

The Marrying of Chani Kaufman

What would have made The Marrying of Chani Kaufman better?

I found the content of this book interesting from the point of learning about different cultures views. I did think it could have been shorter and felt it had been 'padded' out in places.

Would you be willing to try another one of Toni Green’s performances?

Yes her reading was worth listening to

Interest is other cultures

A fascinating glimpse into a different culture. I love books that allow you to learn. The story is good but the ending seems a little too neat. All being shoehorned into an acceptable compromise or just giving in to the inevitable. Surely some people cannot accommodate this. Maybe that would never happen but for such an old respected culture you would have thought by the very nature of human beings some people just cannot fit into the rigid mould. Maybe that's a different book.
Nevertheless ignore my quibble this is a good book, well presented and of inestimable value to people like myself who have little knowledge of such a world and are very curious about it.
Thank you for writing it.

I hope she's busy on the sequel

Would you consider the audio edition of The Marrying of Chani Kaufman to be better than the print version?

I went to school with Jewish girls in North London. The narrator worked for me.

What other book might you compare The Marrying of Chani Kaufman to, and why?

Very difficult to say in that it's almost a period piece yet not a period piece. A slice of 21st century London that you glimpse, but never get. Teenage girls in the middle of London who don't know how babies get made? Schools, that accept kids on condition that they don't have TV in the house? I've never come across a story like it where the values and customs are almost from another era, yet they have mobiles in their pockets!

The disastrous proposal was fun. Still reeling from the first visit to the ritual bath.

Poor Rifka reached out to her husband and his strong beliefs wouldn't let him help her.

could have done with a glossary-some of the words even hard to look up in a dictionary because of their strange pronunciation. Not sure how you do that on audio.WHAT HAPPENS NEXT? Come on now, there's at least one more book in there-how does Jerusalem go? Does the marriage survive? What does Mrs Levy try next? Rifka or Rebecca? Does Avromi really never again? thoroughly enjoyed this-not Jewish but lived on edge of several orthodox communities in my time. More please!

Interesting, educational, but didn't grab me

I learnt things about orthodox judaism, but the story didn't grab me, and I wasn't sure what the point was. It was OK. Didn't have to force myself to listen, but certainly wasn't seeking extra opportunities to listen.

The author does have a gift with words - i could see the people. I could see them physically, their personalities, their traits.

I would - it would possibly be a better movie than book.