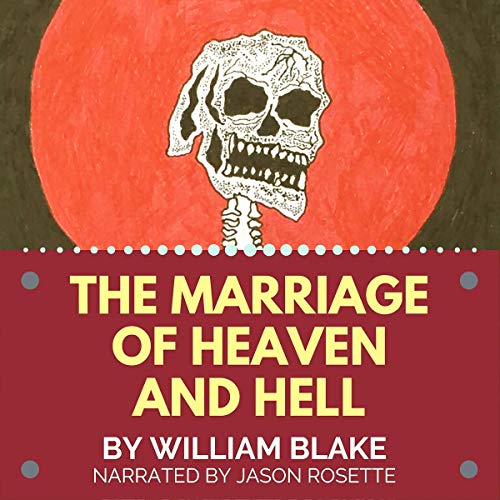 The Marriage of Heaven and Hell

The Marriage of Heaven and Hell - As Featured in the Jim Jarmusch Film Dead Man, Starring Johnny Depp!

A new re-interpretation of the classic mystical poetic work by the English poet and printmaker William Blake, The Marriage of Heaven and Hell is a must-listen for any serious literati or poet - as featured in the movie Dead Man by Jim Jarmusch, starring Johnny Depp.

Blake's groundbreaking work may be best known for the prophetic chapter "Proverbs of Hell":

Timeless aphorisms combined with a pioneering visionary Romantic spirit make The Marriage of Heaven and Hell a must-listen for any serious poet or literati. The book was composed between 1790 and 1793 in the period of ferment and political conflict immediately following the French Revolution.

What listeners say about The Marriage of Heaven and Hell

You might want to see the author's original art including etched and hand colored drawings online before listening.

A prose story of the interdependency heaven and hell, including many proverbs of the wisdom of hell. This is pre-romantic poetry and prose from Britain in the1790's (that some readers may find difficult) and I am sure some religious readers would be offended by a few of Blake's ideas, but if you already like Blake, you will likely appreciate this book as well.

The narration is very good.

It’s William Blake, it’s 2020, I listened. Life can feel rich. Imagine it for yourself why don’t you!

William Blake is one of the great poets\philosophers. His writings are literate, thought provoking, insightful and contentious. However, this version of his classic poem leaves a lot to be desired. The narration is dry and uninspired making this classic seem like a text book or cliff notes version. This is particularly noticeable in the fanciful memories segments where Blake encounters various religious philosophical giants for discourse. Under Jason Rosettes' narration all the poetry and sarcasm is lost, replaced by a dryness that makes the encounters seem too facial and scholarly. This is a major - though dated - work that deserves a quality performance to give it new life in the digital age. Unfortunately, we get nothing like that here.