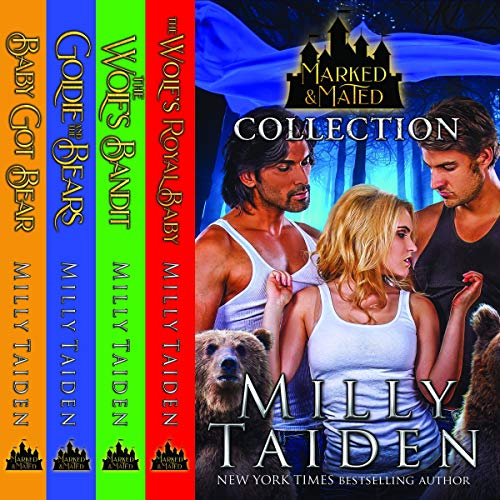 The Marked and Mated Collection

From New York Times best-selling author Milly Taiden comes The Marked and Mated Collection - includes The Wolf's Royal Baby, The Wolf's Bandit, Goldie and the Bears, and Baby Got Bear.

Book one: The Wolf's Royal Baby

Harper Burns was just abducted from her house by four big, bad shifters. When she finds out her father traded her for his life to a wolf king, she’s ready to escape. Even more confusing is the fact Sebastian tells her she must have his baby. The craziest part is she’s actually considering it. Clearly, she lost her mind on the car ride to the castle.

Sebastian Roarhart is shifter royalty. He’s been cursed and needs to have a child or die. Now, he has to convince Harper to see him as more than some man holding her hostage. He needs her to fall for him. But it’s harder than he realizes when someone in his castle keeps trying to kill her.

Sebastian has secrets he’s keeping to save Harper from heartache. Harper knows one thing for sure: She can’t let him die. Not when he’s the first man in her life to show her how special she is. Time’s running out. When truths come to light about her family and past, only the man she’s come to love will be able to keep her safe.

What listeners say about The Marked and Mated Collection

I have been loving all the books I am finding and I can't be happier! Can't wait to find them all!