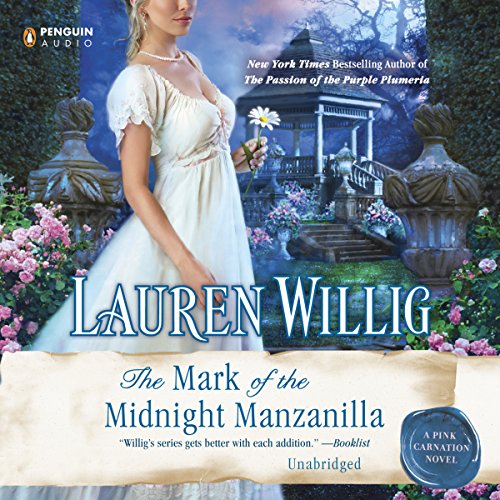 The Mark of the Midnight Manzanilla

In the latest Pink Carnation novel from national best-selling author Lauren Willig, rumors spreading among the ton turn deadly as a young couple unites to solve a mystery.

In October of 1806, the Little Season is in full swing, and Sally Fitzhugh has had enough of the endless parties and balls. With a rampant vampire craze sparked by the novel The Convent of Orsino, it seems no one can speak of anything else. But when Sally hears a rumor that the reclusive Duke of Belliston is an actual vampire, she cannot resist the challenge of proving such nonsense false. At a ball in Belliston Square, she ventures across the gardens and encounters the mysterious Duke.

Lucien, Duke of Belliston, is well versed in the trouble gossip can bring. He's returned home to dispel the rumors of scandal surrounding his parents' deaths, which hint at everything from treason to dark sorcery. While he searches for the truth, he welcomes his fearsome reputation - until a woman is found dead in Richmond. Her blood drained from her throat.

Lucien and Sally join forces to stop the so-called vampire from killing again. Someone managed to get away with killing the last Duke of Belliston. But they won't kill this duke - not if Sally has anything to say about it.

What listeners say about The Mark of the Midnight Manzanilla

Lauren Willig's Pink Carnation series is absolutely one of my favorite reads and I especially love them on Audible when narrated by Kate Reading (who has read all but one). While they are all enjoyable, this one took me back to the original book that started it all, The Secret History of the Pink Carnation. It was just delightful from beginning to end. If you are one of those lucky folks that haven't yet sampled the Pink series, I envy you. Do yourself a favor and dive in. Only one caution - they should be read in order since the characters are all intertwined and their progression needs to be followed logically.

I really liked this book. It was a lot of fun. Okay, there weren't many spies. And Eloise comes across as a 14 year old at times. (That could be Kate Reading's reading of her. That's why I gave the performance only 4 stars. At least she pronounced "Eloise" right this time.) But it's an entertaining book.

Sally's story is funny and easy to read. I totally enjoyed it. I'm so glad there's one more book in the Pink Carnation series. I really like Lauren Willig's books.

I hate to sound so cynical, but it seems to me that Willig has made it to the end of the garden with this one. I am not very impressed with the story. It leaves much to be desired, and she seems to be killing off her 21st century heroine's character. I hope the next flower installment is a little less predictable.

I really enjoyed this book and I love Sally and Lucien, but I missed Ms. Gwen and Jane. I know that Ms. Gwen was included in the book, but her role was minimal. I actually think that I liked Eloise's and Collin's story the best. I can't wait to see what happens with them in the next book.

I really do love the Pink Carnation series. Lauren Willig is such a talented writer. She can take you back in time 200 plus years or 10 years and make you feel like you are right there with the characters. I enjoy her books so much!

Kate Reading's narration is PERFECT - PERFECT!!!! She switches between an American accent and British accent without any problems and makes every single character believable and brings them to life.

The combination of Ms. Willig and Ms. Reading is spot on!

I love this series. The narrator is excellent, as is the writing.
Start with the Pink Carnation

I am a true fan of Lauren Willig's entire Pink Carnation series. I can't wait for tomorrow's release of the final book in the series though I hate to see it end. In this installment, I love the play of the vampire hysteria to add a touch of modern culture to the story. I all love how old friends are mentioned throughout the series. It lets me remember the characters like old friends.

I absolutely love the series and I can't wait for the next book. Another great book, Lauren, you hit it out of the park.

What happens to Lizzie and the rest?

I think this may be the next to the last of the flower spies. After reading hundreds of series over more years than I care to look back upon, this is the first time I want to say
NO. Don't Stop!

And this is not even the best of the books. This is the first time that the villain is almost waved n front of the characters and these demonstrably bright characters refuse to see him. One of the brightest of these people chirps, "Who Benefits", and then reasons why the person who benefits can't be the bad guy. While this is slightly irritating to the reader, it is worth the irritation to spend time with these witty, if more than a little snarky characters.

Stating the obvious, this series began as a parody of the Scarlet Pimpernel, and it is done with cheerful affection, as the best parodies are. The following books in the series acknowledge the gothic works of the eighteen hundreds. This one nods toward Dracula, and no there are no coffins with old dirt in them. Society simply decides that one of its few Dukes who returns to society after a long absence is hanging out in the ruined gardens of his long empty town house because he cannot go out in the sun, or at least he must not be wholly sane. Sally Fitzhugh meets him in the moonlight and decides she likes him. People Sally likes, she defends, and the reader is off to another fun romp.

The best part of these books is that the every character, even those we only meet at a glance at a family party or in a coffee house, are so well drawn that we feel we know them, and are glad to see them again. It would take several paragraphs of spoilers to state why I like Turnip Fitzhugh better than the lead characters in the series. I expect he was created as a foil for some of the sharper government agents in the stories, but he has evolved into a mainstay of the series. Which is why this series is so good. Not once does the author tell the same story over, and over, and over as in so many long series. The characters grow, and as they grow their differences are more pronounced, there is a depth to these people who I like more for their flaws than there perfections. So I hope we get to hear more about all of them.

continue to enjoy Lauren's style and Kate ' s narration ! it's like a date with dear friends and catching up. ..delightful

I love The Pink carnation series and Kate Reading brings it to life. I just wish we didn't have to wait so long between novels to learn what will happen between our main characters and Eloise and Colin.