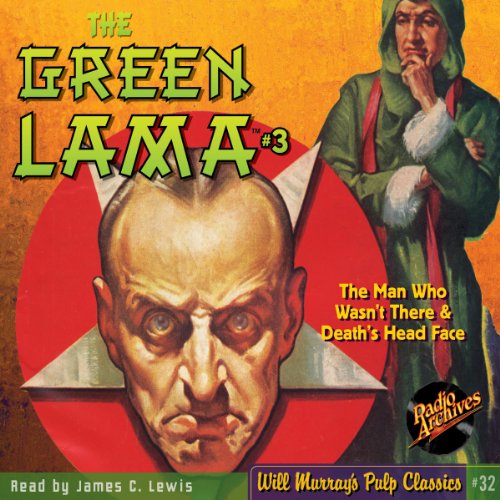 The Man Who Wasn't There & Death's Head Face

The jade-robed Buddhist priest who battled crime as The Green Lama is back. Conceived in 1939 at the behest of the editors of Munsey Publications to compete with The Shadow, The Green Lama was the creation of writer Kendell Foster Crossen, who was asked to think up a hero who could lure mystery-minded readers away from The Shadow's loyal legion of followers.

"The basis for the Green Lama came after I'd read a nonfiction book review in the New York Times about an American who really became a lama," Crossen once recalled. "The book was titled, The Penthouse of the Gods." That individual was Theos "the White Lama" Bernard. Returning to the States, young Jethro Dumont assumed an alternative identity of the Buddhist cleric, the Reverend Dr. Charles Pali, then began gathering about him a band of civic-minded citizens to join him in his Buddhistic battle against suffering in all forms - particularly those caused by criminals. And aiding him from the shadows, the mysterious Magga, a woman of many faces who has taken an interest in guiding The Green Lama's campaign against malefactors. One of the fascinating and delightful things about Ken Crossen's Green Lama stories is the parade of supporting characters popping in and out of the action during the course of the series. In our first selection, "The Man Who Wasn't There", two of these announce their intention to marry. In the second story, "Death's Head Face", they do wed, thereby paving the way for a resourceful new couple to work in service to The Green Lama. And so, bid farewell to Gary Brown and Evangl Stewart, and say hello to Broadway-bound actors, Ken Clayton and Jean Farrell. You'll be hearing more about these latter two in upcoming audiobooks. Otherwise these exciting stories tell the linked tale of The Green Lama's confrontation with James Nord, the Man with the Death's Head Face. He's the only villain the Lama tackled twice. They first encounter one another aboard the S.S. Cathay, as Jethro Dumont returns from his previous adventures in Hollywood, while Nord is operating a smuggling ring. Back in New York for the sequel, Dumont begins the search for The Murder Corporation's skull-faced chief executioner. James C. Lewis again essays the triple role of Jethro Dumont and his emerald-clad aliases, Reverend Dr. Pali and The Green Lama....Om Mani Padme Hum! The Green Lama knows!