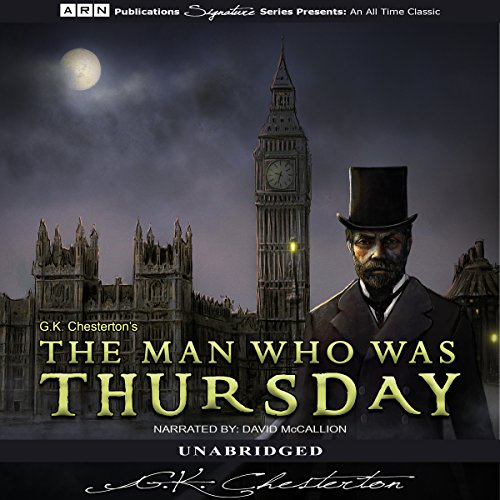 The Man Who Was Thursday

The Man Who Was Thursday was written by G. K. Chesterton and follows newly recruited Scotland Yard detective Gabriel Syme as he infiltrates the dangerous underworld of the European anarchist council. Syme is a member of a special antianarchist division of the police and finds his way into the secret group through a poet he befriends, named Lucian Gregory. Once Syme is on the inside, he discovers the council is made up of seven men, each named after a day of the week, and is led by the mysterious president known as Sunday.

He discovers the group's intention to kill a czar who will soon be visiting Paris, but in his attempts to stop this plot he soon realizes that all the other members of the anarchist council are also undercover police tasked with bringing the group to justice. With all their identities now in the open, they join together to find out the real truth behind why Sunday set them all against each other and who the enigmatic leader really is. After chasing the president through the streets of London, they eventually confront him, and Syme's nightmare comes to a surreal end.

The book was first published in 1908 and has been adapted many times over the years, including two adaptations for BBC radio as well as an abridged radio play adaptation written by Orson Welles.

What listeners say about The Man Who Was Thursday

I first read "The Man Who Was Thursday" in college, and it caught me up in its wonderful storytelling. Chesterton is one of my favorite authors, and this is my favorite of his works. I try to read (or listen) once a year to remind myself of the wonderful truths found in this story.

An allegory that may stretch contemporary readers

Enjoyable but at times so whimsical it was distracting. Gave me plenty to ponder. It is an allegory that requires contemplation after the fact. Worth the effort and time.