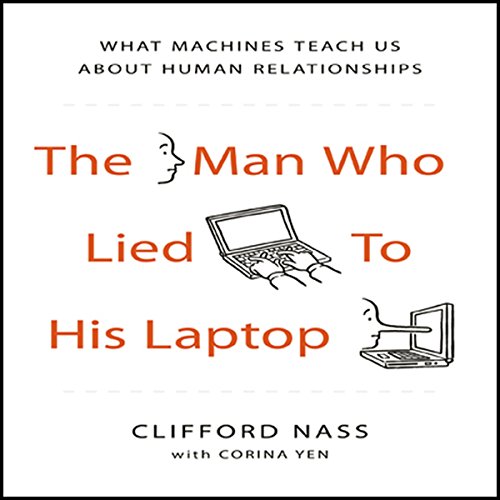 The Man Who Lied to his Laptop

What Machines Teach Us About Human Relationships
By: Clifford Nass, Corina Yen
Narrated by: Sean Pratt
Length: 7 hrs and 46 mins
Categories: Non-fiction, Psychology & The Mind
3.5 out of 5 stars 3.7 (3 ratings)

The Man Who Lied to his Laptop

Startling insights into persuasion, trust, empathy, and teamwork, based on how we treat our computers....

The driver was insistent: “A woman should not be giving directions.” Despite the customer-service rep’s reassurance that the navigation system in his car wasn’t actually a woman - just a computer with a female voice - the driver (and many others like him) refused to listen. There was only one person for BMW to call for help: Clifford Nass, one of the world’s leading experts on how people interact with technology.

After two decades of studying problems like BMW’s GPS system, Microsoft’s Clippy (the most hated animated character of all time), and online evaluations that led people to lie to their laptops, Nass has developed a powerful theory: Our brains can’t fundamentally distinguish between interacting with people and interacting with devices. We will “protect” a computer’s feelings, feel flattered by a brown-nosing piece of software, and even do favors for technology that has been “nice” to us. All without even realizing it.

Nass has found that the most powerful strategies for working with people can be learned from watching what succeeds and fails in technology interfaces. If a computer can make friends, build teams, and calm powerful emotions, so can any of us.

Nass’s discoveries push the boundaries of both psychology and technology and provide nothing less than a new blueprint for successful human relationships.

"With the help of real experiments, rather than anecdotes or impressions, Clifford Nass uses people's interactions with computers as a window into social and professional life. The book is filled with insights about an increasingly important part of our lives." (Steven Pinker, Harvard College Professor of Psychology, Harvard University)

What listeners say about The Man Who Lied to his Laptop

Finally, a Good "Why We Behave as We Do" Book!

You're probably here because you'd like a really good book on human behavior - specifically, why we think, feel, act and react the way we do, especially in social interactions. You know that the reasons we are attracted to some people and ideas, and repelled by others, aren't always clear, and in fact are often a complete mystery. If you're anything like me, you've read "The Tipping Point" and "Blink," maybe even "On Second Thought," "I Live in the Future," "The Invisible Gorilla," or the dozens of other offerings that promise to reveal your brain's perceptual errors, and your hidden motivation and those of others, the blind spots in your experience of other people and everyday life - all that cool stuff that will finally have you saying "Ah-HA!" But no matter what the reviews on Amazon or the New York Times (or all those gushing testimonials) say, when you finish, you feel a bit "cheated," oddly dry, like you weren't really provided with useful insights.

You weren't. But take heart, because here is a book that delivers! Clifford Nass, Stanford professor for the past 26 years, wanted to conduct social science experiments in human interactions and reactions to various common everyday scenarios, but he wanted to overcome the problem of the "confederate" - the "planted" person in the experiment, who all too often can skew the results by his or her own biases, unconscious facial expressions or other unintentional behavior. Then he had a brilliant insight: he noticed how antagonistic people were to Microsoft's infamous "Clippy," the animated paper clip "helper" that would pop up when one was in the middle of word-processing. He realized that people react to interactive computers with the same attitudes and emotions that they do to fellow human beings, and computers were the perfect "confederates," since they could perform exactly the same with every person and in every situation.

So he and co-author Corina Yen, his colleague from mechanical engineering, together with various graduate students (and many computers!), began devising experiments, the astonishing results of which are in this book. There are some genuine eye-openers here. To begin, just why did people hate "Clippy" so much? But it gets more practical: why do most businesses, large and small, fail abysmally at performance reviews and "team-building" exercises? And what would be EFFECTIVE ways to do these things? Why do you find one movie reviewer (or authority on anything, for that matter) much more likeable and engaging, yet find another, less likeable authority more believable and trustworthy? What is the REAL reason a car salesman gets you to agree to his terms, while thinking they are yours, when you know in advance their entrenched reputation for slick tactics? (You haven't heard it explained like this before!) And so much more!

Sean Pratt's narration is measured, "comfortably slow," with frequent brief pauses - but never in an annoying way. In fact, it is the perfect reading pace for absorbing the fascinating contents of this book.

If you are a frustrated "student of human behavior," skip the many other books on the subject (or box them for your next yard sale) and get this one!

'The Man Who Lied to His Laptop' &Yelled @ His LMS

One of the things you will learn from The Man Who Lied to His Laptop is that being critical will make you sound smarter. Write a critical book review, and the review will be taken more seriously. This helped me understand why I've been feeling less than adequate in liking (and recommending) so many of the books I read (including this one). Reviewers who are not critical are viewed as less competent, hence we get more critical book reviews.

I was very happy to learn that the prolific Dr. Nass is a sociologist (Princeton 1986). I suffered moments of professional jealousy to learn that Nass is one of those academics who combine insane publishing productivity (3 books and over 125 research papers), with a busy and lucrative consulting career on human / computer interfaces with companies ranging from Microsoft to Toyota to BMW to Dell. Professional success in academia is not not distributed normally (would a Pareto distribution describe accurately describe the academic productivity?).

The Man Who Lied to His Laptop takes as its content many of the experiments and consulting gigs that Nass has run. Nass' central insight, the one he has built his career around, is that people treat computers like people. Substitute a computer for a person, have a real person interact with the computer, and learn lessons about the ways in which people behave and make decisions.

One experiment from the book that sticks in my mind was an investigation of "expertise."
Nass took a two TV sets, labelled one of them with a sign "News Specialist." People who watched newscasts on the "News Specialist" TV found those newscasts to be more convincing, better reported, and of higher quality than people who watched the same newscasts on the "generalist" TVs. It's good to be labelled a specialist or an expert in a subject.

This is a good book to read if you are in educational technology. The book has helped me understand how students and professors will view the learning technologies that we offer for teaching and learning, and ways in which we can communicate about these technologies when something goes wrong (and it always does). Recommended if you work at the intersection of technology and people.

This is another volume available from Audible providing insight into human/technology interface. In this volume, Clifford Nass aptly reports results of his own research and that of others to shed light on the human condtion. There is food for thought to any thoughtful person hoping to understand what is currently taking place technologically and what it might mean for society and human behavior. It is well written and wonderfully read by Sean Pratt. There is something here for everyone with an interest.

Amazing book with amazing narrator. This book is critical reading in my opinion. Give it a listen.

Fascinating & Solid addition to his other work

I first read Nass in grad school, and its been the basis for much of my work in the field of User Experience design.

If you have an interest in human computer interface design, or just want a better understanding of the in-grained social dynamics that make people tic, check this book out.

It can be a little dry at times, but worth it.

The book failed to keep the listener engaged. It could have been presented better. The energy was missing

Computer programmers have a reputation for being dull and boring and if this book is anything to go by it's well deserved. The reader sounds like he's struggling to pay attention at some points. I feel sorry for him, I could turn it off.