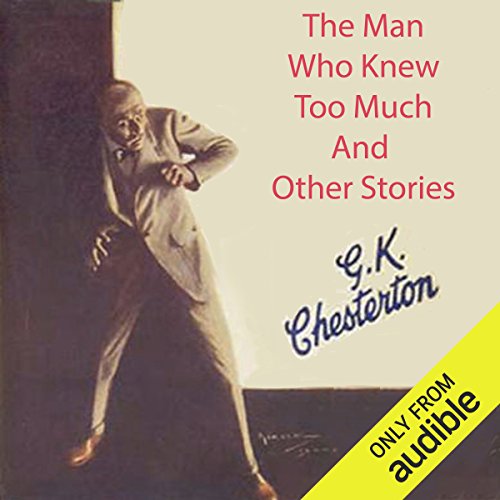 The Man Who Knew Too Much and Other Stories

Eight adventures in this classic British mystery series featuring Horne Fisher and his trusted friend Harold March. Horne is a natural sleuth, but his inquiries develop moral consequences. Notable for their wit and sense of wonder, these tales offer an evocative portrait of upper crust English society before World War One. Contains eight stories: "The Face in the Target", "The Vanishing Prince", "The Soul of the Schoolboy", "The Bottomless Well", "The Fad of the Fisherman", "The Hole in the Wall", "The Temple of Silence", and "The Vengeance of the Statue."

Narrator has no life or emotion and the reading is so dull and flat that a computer voice would have been more interesting. This narrator should be banned from narrating any other books. Don’t ruin another story with this unbearable voice.

The reader appears very accomplished, so I hesitate to write this negative review. His pronunciation is clear and articulate, but the reading is choppy and awkward. It actually sounds like a computer is reading the book. I'm afraid I couldn't finish.

I was determined to finish the book, but this narrator made it such hard work. He has a rhythm he sticks to regardless of sense or sentence. I will avoid him at all costs in the future.

Great stories ruined by the reader

These are great stories by a well loved author totally ruined by an dreadful reading. I was unable to complete the book due to the incomprehensible reading. The stresses are constantly wrong on each sentence, he ignores punctuation so stops in the wrong place making the whole meaning of what was written confused and messy. Accents and voices all over the place. Do not waste your money on this book.

Let down by the naration

I had never come across these stories before and was intrigued. However as they progress the narration gets more annoying.

Totally incomprehensible because of poorly emphasised reading. Reader has wonderful tone, but no text understanding.

Like many I felt the reading was woeful: pauses in the wrong place, stresses on the wrong word/syllable and using an American narrator when the stories are quintessentially English was perverse. However, all that did not offend me sufficiently to stop listening and I got used to it enough to finish the book. It was an interesting take on life, class and politics (and anti-jewish prejudice) in the early 20th century.

The most awful narration ever

While the timbre of the narrator's voice is spot on it would appear that he has never understood the effect of punctuation on narration. He pauses in all the wrong places and the emphasis on the text is seemingly random. I have tried and tried to get through this but it just drives me nuts. The book was purchased as part of a deal from Audible so there is not much milage in returning it (a service I salute Audible for) but I would like a shot if I had wasted a whole credit on it.

These intricate little detective stories published in 1922 are a window into another world, before the fall of the British Empire written by a man at once sceptical and very much part of it. Some of it makes one wince at the casual racism but it is very much of its era and it's hard to find an author from then that doesn't share that fault.

What was one of the most memorable moments of The Man Who Knew Too Much and Other Stories?

In the Hole in the Wall he writes, I paraphrase, "we live in at time when people believe anything without evidence and accept nothing from authority" which made me think not much has changed.

Would you be willing to try another one of Alan Munro’s performances?

Absolutely not! Leaving aside the curious choice of an American to read quintessentially English stories, he has the reading style of William Shatner. There's inappropriate emphasis on random words, sudden pauses mid-phrase and then sentences that run into each other, it made following the quite detailed stories very difficult. Before I checked I thought it might be a particularly bad text reader.

Was The Man Who Knew Too Much and Other Stories worth the listening time?

Yes, despite the reader. I wouldn't spend more than a couple of quid on it though, it's not worth a token.