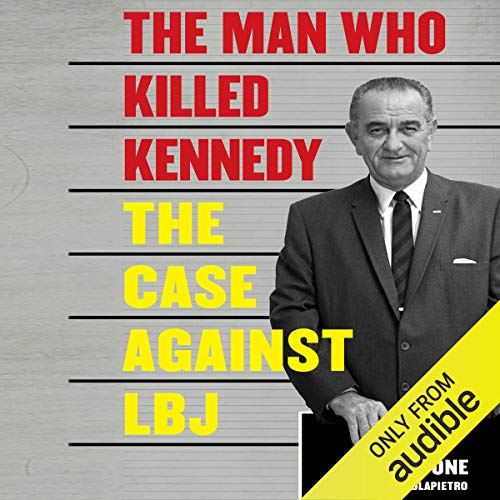 The Man Who Killed Kennedy

In this audio book, longtime Republican political operative Roger Stone makes a daring assertion about one of the most pivotal moments in American history.

Featuring a measured performance by David Rapkin, The Man Who Killed Kennedy: The Case Against LBJ presents the theory that the CIA conspired with the Mafia and Texas oil men to kill Kennedy and install Lyndon Johnson as the president. Although Stone’s assertion will certainly be questioned, his firsthand knowledge of politics and politicians shines through in his writing.

Lyndon Baines Johnson was a man of great ambition and enormous greed, both of which, in 1963, would threaten to destroy him. In the end, President Johnson would use power from his personal connections in Texas and from the underworld and from the government to escape an untimely end in politics and to seize even greater power. President Johnson, the thirty-sixth president of the United States, was the driving force behind a conspiracy to murder President John F. Kennedy on November 22, 1963. In The Man Who Killed Kennedy, you will find out how and why he did it. Political consultant, strategist, and Libertarian Roger Stone has gathered documents and used his firsthand knowledge to construct the ultimate tome to prove that LBJ was not only involved in JFK's assassination, but was in fact the mastermind. With 2013 being the fiftieth anniversary of JFK's assassination, this is the perfect time for The Man Who Killed Kennedy to be available to readers. The research and information in this book is unprecedented, and as Roger Stone lived through it, he's the perfect person to bring it to everyone's attention.
©2013 Roger Stone (P)2013 Audible, Inc.

What listeners say about The Man Who Killed Kennedy

COMPELLING BOOK - THE CROOKS ARE IN POWER

Highly recommended because it provides convinging evidence which shows that the Warren Commission was a complete white wash. Oswald was a distraction to prevent the real killers from being sought. The evidence is very clear in this regard.

the book is too long to go through in one sitting

The American people need to listen to this book and to rise up against the tyranical forces in power. This is disturbing but inaction will lead to tyrany and oppression.

The government needs to come clean.

Stone Has Written a Blockbuster

Every American should read this book particularly those of us who lived through this
era. I will never look at American Politics again in the same way.

Why this conspiracist garbage?

Depressing that Audible has made this book free as a part of its new membership system. This book is not a serious attempt at uncovering anything. It was written to pander to credulous people who want to believe simplistic conspiracies about the world and to to take their money and promote the publicity seeking author, a man convicted of lying to Congress about his involvement in the treasonous distribution of Wikileaks material in behalf of the Russian intelligence services. I’m all for different points of view but promoting this nonsense for free is plain wrong.

I try not to buy in to conspiracy theories and I only bought this audiobook because it was on sale and the reviews here and on other websites were pretty good, but wow!

I kinda found it very believable.

Certainly without doing my own research I have to take the author's facts at face value. But even if only 50% of the facts are accurate, LBJ certainly seemed like a man of massive ego and hugely questionable morals who certainly had the power, connections and motive to clear the way for his own presidency.

It was certainly a very ugly period in US history and there are so many theories, so many movies, books and documentaries about the events, it can be hard to separate the wheat from the chaff. But this book read fresh and rigorous and I was left feeling uneasy and that he should have been at least a leading suspect in any true investigation.

that LBJ did it. A great deal of circumstantial evidence. Though circumstantial, enough of it to make defending Johnson seem impossible. The story is interesting; however, it comes across as a bit of a research paper with a lot of name dropping.

LBJ was one bad SOB

What did you love best about The Man Who Killed Kennedy?

He does a great job of showing how the various people close to Kennedy interacted.

It's a compelling argument that is very plausible.

Thought there was more evidence about Johnson. I already thought he was involved but the book did not come close to convincing me I was right. A lot of names but nothing convincing.

What made the experience of listening to The Man Who Killed Kennedy the most enjoyable?
Finally a convincing version of one of the most significant events in the second half of the 20th century.

What did you like best about this story?
The connecting of many elements into a coherent (and terrifying) perspective

What does David Rapkin bring to the story that you wouldn’t experience if you just read the book?
He reads clearly, at a good speed and with a good voice. Excellent reader.

Was there a moment in the book that particularly moved you?
Many

Any additional comments?
Makes one see the world in a different way. [2019: I have since learned who Roger Stone is and have serious doubts about anything he says]•

There are a lot of interesting facts in this book. As a review of events surrounding the assassination of John Kennedy, it's a success. But as an indictment of LBJ, it falls very short. There are other books focused on LBJ that do a much better job.

Very interesting totally worth the audible credit. Would recommend to anyone interested in JFK. Well read. Very very very good.

Two hours into the book there are so many inaccuracies, and so much hearsay, the author is also jumping around eras confusingly. I have read 5 other books on this topic, all of which were well researched and provided credible references.
I have no doubt LBJ was complicit in the assassination but, already early on in this book, Roger Stone has lost all credibility. Its like the town drunk at the end of the bar is skimming over history adding any BS or conjecture possible for effect.

This book recycled all the sorties about JFK killing and those “involved”. Stone sets out to show that LBJ was responsible but offers no proof

Roger Stone makes a compelling case against LBJ.
For example,
# LBJ's use of his secretary pool as his harem!
# LBJ's intimidation and murder of witnesses. At first witnesses of LBJ's voting corruption, and later of JFK's assassination.
# LBJ's, corrupt relationships with the CIA, Texas oilmen, arms manufactures, and organised crime, resulting in the murder of JFK and the prolongation of the Vietnam War.

Roger Stone has written a well-researched narrative that includes many details missed, or deliberately ignored, by other authors.

LJB probably did kill JFK but this book offers no proof

A decent read/listen but I suspect a bit of hyperbole from who is now yet another Trump coconspirator locked up in jail.
I would bet that LBJ did have JFK killed but this book offers nothing but circumstantial and character based evidence. There are no hard facts or proof points even half suggested.
That said, it does offer a good insight into the man and good motives and operandi.
There are better books out there on LBJ and the JFK assassination.

A compelling and fascinating dissection of the JFK assassination. As well as dissecting the available (Not destroyed) evidence it takes a forensic look into who wanted JFK dead and who profited from his death. It becomes clear that only one man could sit at the centre of the web, and that was the man who inherited the greatest prize of all - the White House itself. Does this book prove the case beyond reasonable doubt? Listen and decide yourself , you'll certainly enjoy the trial whatever you decide.

Roger Stone gives great insight and detail into the complexity of the JFK assassination and offers numerous sources for cross reference and checking. great work.

If you could sum up The Man Who Killed Kennedy in three words, what would they be?

What other book might you compare The Man Who Killed Kennedy to, and why?

JFK and the unspeakable is still the daddy for me

What does David Rapkin bring to the story that you wouldn’t experience if you had only read the book?

An easy to listen to voice so you don't miss much

Not Just Another Conspiracy Theory !

Did LBJ kill President Kennedy ? I don't as a rule believe in conspiracy theories. Nor do I believe LBJ killed President Kennedy. So why am I reading this book ? The simple answer is I like a good conspiracy theory and if there is one conspiracy theory that I do believe is that the original conclusions of the Warren Commission are false. My own view is that there was more than one assassin that shot dead Kennedy. There was probably two gunmen in the Depository building (one being Oswald) and one marksman behind the grassy knoll who fired the final and fatal bullet. Who was responsible for the plot to assassinate Kennedy ? One of the usual suspects, in my view: the Russians, Cubans, CIA, Johnson or the Mafia; take your pick. For me, the most likely suspects are the Russians, which is why there was a cover up to avoid a military confrontation at the height of the Cold War. This is an interesting book full of conjecture and all I will say is that it makes an argument that Johnson could have been behind Kennedy's murder, although, I don't personally believe it. You will probably take a different view to mine after reading this book.

My rating 4/5. Interesting theory which many people now believe, however, I do not which is why I deduct 1 star. It could only get 5 stars if I believe LBJ did it. Nevertheless, I give it a high 4 stars because it provides a lot of information and also describes LBJ's hatred of the Kennedy's. It is also quite amusing as the author clearly cannot stand LBJ.