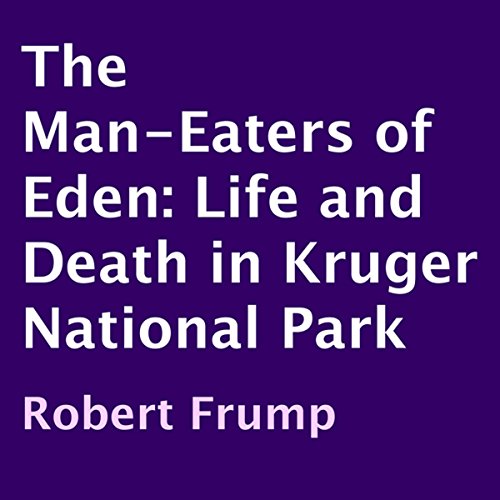 The Man-Eaters of Eden

It was the winter of 1902; South African park ranger Harry Wolhuter was on horseback, patrolling the area for poachers at Kruger National Park. Little did he know, he was also being stalked. Out of nowhere, two huge male lions pounced on Harry's horse, knocking the man to the ground. The horse ran off, leaving Harry to fend for himself. One of the lions lunged at him - piercing deep into his flesh and bones - and began to drag him far into the jungle to finish him off. Harry's only hope for survival was the small sheath he carried on his right hip, and he could not reach it easily. With a few quick stabs to the massive beast's chest, he waited and prayed for the best. Miraculously, after spending hours in a tree - drifting in and out of consciousness - with only his terrier standing between him and the second lion, he survived the attack and lived to tell his story.

But others have not been so lucky at Kruger National Park. Today, Mozambican refugees are being eaten alive in great numbers as they attempt to walk the Kruger, yet no one seems to know about these massacres, and nothing is being done to stop them. More lion attacks have been documented in the past year than ever before.

And so begins the investigative journey of journalist Robert Frump. In July of 2002, his plane touched down on the airfields west of Kruger, and what he discovered was beyond belief.

What listeners say about The Man-Eaters of Eden

This book is a gem that you shouldn't overlook. I picked this up while looking for the 'Man eaters of Tsavo' but I honestly had no idea I had just hooked into one of the most memorable reads of my life. This book is beautifully written and even more so since it details the scene of real human suffering and desperation, it's a story told for a sad reason but one that doesn't needlessly bum you out; in fact you feel like you needed to be informed. Absolutely worth the credit.

The narration was outstanding. That's always my first critique on an audio book. The substance of the book was very engaging...of course there are stories of terrible lion attacks, but there is factual background about the causes of the attacks, etc. The book is peppered with relative geopolitical information that gives the book another great facet making it a well-rounded and informative piece of work. I will probably listen to this one again in the future.

An interesting and informative look at Kruger

An interesting and informative look at Kruger National Park from the perspective of an observer and regular guest who has generated a comprehensive, documentary style report. Robert Frump describes the events and atmosphere at Kruger, over a period of years, as it relates to the Lion population and the various and changing influences affecting attitudes towards preservation and management of Lions in the Park. His accounts of real life activities and experiences of Park Rangers, illegal immigrants and Pride habits and life styles are informative and objective. John Skinner's narration was more than adequate and I would happily consider another effort from this author or narrator. This one is in the second tier of my library.

This is one of those books that is guaranteed to get conversations going. The scope of the story is rather timeless. A great mix of natural history and political drama from a faraway land. Read it!

Not what was expected

What disappointed you about The Man-Eaters of Eden?

Perhaps its me but I was expecting stories about incidents in Kruger of man versus wildlife. What was presented was a cataloging in a "hand-wringing & finger pointing" way about refugees from Mozambique trying to cross the park and getting killed by lions. Frump claims this is a journalistic search for the truth, of which he often reminds the reader, but most of the statistics cited are without reference.

What could Robert Frump have done to make this a more enjoyable book for you?

Maybe a different title pointing to a refugee problem, now it just seems like a long newspaper article.

Did John Skinner do a good job differentiating all the characters? How?

No, there was no differentiation. Which is not a critique, none was needed. There is only one speaker. Skinner has a good strong voice but he is not the equal of Robertson Dean or Scott Brick

The situation is indeed a horrible problem, but merely illuminating it without suggestions on how to help solve it was disappointing.