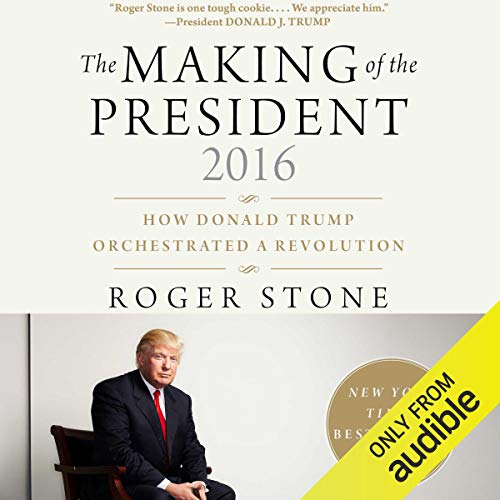 The Making of the President 2016

In the tradition of Theodore White's landmark books, the definitive look at how Donald J. Trump shocked the world to become president.

From Roger Stone, a New York Times best-selling author, longtime political adviser, friend to Donald Trump, and consummate Republican strategist, comes the first in-depth examination of how Trump's campaign tapped in to the national mood to deliver a stunning victory that almost no one saw coming.

In the early hours of November 9, 2016, one of the most contentious, polarizing, and vicious presidential races came to an abrupt and unexpected end when heavily favored presidential hopeful Hillary Clinton called Donald J. Trump to concede, shocking a nation that had, only hours before, given little credence to his chances. Donald Trump pulled the greatest upset in American political history despite a torrent of invective and dismissal of the mainstream media. Here is the first definitive explanation about how the "silent majority" shifted the election to Donald Trump in reliable Democratic Pennsylvania, Wisconsin, and Michigan, thus handing him the presidency.

Stone, a longtime Trump retainer and confidant, gives us the inside story of how Donald Trump almost single-handedly harnessed discontent among "Forgotten Americans" despite running a guerrilla-style grassroots campaign to compete with the smooth-running and free-spending Clinton political machine.

From the start Trump's campaign was unlike any seen on the national stage - combative, maverick, and fearless. Trump's nomination was the hostile takeover of the Republican Party and a resounding repudiation of the failed leadership of both parties whose policies have brought America to the brink of financial collapse as well as endangering our national security.

Here Stone outlines how Donald Trump skillfully ran as the anti-Open Borders candidate as well as a supporter of American sovereignty and how he used the globalist trade deals like NAFTA to win over 3 of 10 Bernie Sanders supporters. The veteran adviser to Nixon, Reagan, and Trump charts the rise of the alt-conservative media and the end of the mainstream media monopoly on voter-impacting information dissemination. This is an insider's view that includes studying opposition research into Bill, Hillary, and Chelsea Clinton's crimes and the struggle by the Republican establishment to stop Trump and how they underestimated him.

What listeners say about The Making of the President 2016

Great satisfying read of the making of the greatest President in modern history (at least) ...

Great behind the scene information.

If you want to know everything about the election race and some history you might not otherwise hear about, this is the place to get it.

nothing was more interesting than the election. this book tells us some inside stories that we wouldn't hear otherwise.

Summary of President Donald Trump and the election

Absolutely, it explains more about what President Trump did for years to prepare himself to run in the 2016 election. Knowing who the other players in the election were and what they did to not win the final vote reassures that we made the right choice...we picked a very intelligent winner.

There could not have been a better book on the subject. I thought it would be okay, but it was incredible.

if you wonder why and how it happened this is a great book to spell it out.

Great book. We are a blessed nation to have dodged Clinton for president. Enjoyed the book and the outcome!

Book is FABULOUS about 2016 Election - delicious details. This book details who the players are and where they came from.

This was a very good book to listen to. I used to hear it when I walked every morning. It is an extremely honest story about the election of Donald Trump to the presidency of the United States. What I like listening to are the facts behind the scenes--and they are presented to the listener in this book. I highly recommend it to anyone who wants an in depth-unbiased and honest view of the recent election.

It's a little nerdy. And has some boring statistics but such things are necessary for politics. I'll read it again sometime. Thanks to Roger for his insight 👍.

I'm a big fan but this book was very mediocre nothing new or exciting, this book was boring and worst of all the audio is baaaad! quality Try his other books but not this one.

Everyone in the English speaking World should listen or read this book. Donald Trump is saving Western Civilisation.

Doesn't talk about Trump much!

I wish I could get a refund. Even as someone who does like trump, this book is worthless. The author doesn't talk about Trump much at all, but instead focuses on Trumps opponents and whoever the author doesn't like.

A Recap with a few interesting passages

The bulk of this is just a blow for blow recap of the 2016 US election, there are however a few very interesting bits. The lies of Ted Cruz, Huma's background and possible spy link, the investigation into Stone, and the background of the criminals and ringers brought in by the DNC in a failed attempt to bring down Trump's campaign. Probably worth about £10.99 at best, but not full RRP. will be an excellent historical resource in years to come though.

Interesting perspective, but a bit fawning

I would strive for a more objective view of the Trump campaign and election.Stone seems to think that Trump walks on water and any criticism of him is fearmongering by a 'far-left elite' (his term). His view is made very clear when discussing the other GOP candidates; he makes it clear that at least three (Trump included) had no previous electoral experience but then says that Trump was the 'only true outsider' with little explanation of what he means by this. I wanted a fair assessment, and it is interesting to hear a pro-Trump view, but is so clearly a devotee of Trump that his view very quickly becomes tiresome. At one point, he even suggests that Trump was sent by God to fix America's economy!

Would you recommend The Making of the President 2016 to your friends? Why or why not?

I would. It is interesting as a 'first draft' of history written by an insider but it's claims need to be taken with a large pile of salt.

Have you listened to any of BJ Pottsworth’s other performances? How does this one compare?

I haven't but he does a very good job here, he's an engaging reader.

Do you think The Making of the President 2016 needs a follow-up book? Why or why not?

Yes, either an insider view of the Clinton campaign or a more holistic and objective view of the election as a whole.